We have just returned from one of the best trips we have ever taken.  My husband and I went to Hawaii on our honeymoon, and I remember it being beautiful and wonderful.  But I was only 24 and didn't have a full appreciation of just how gorgeous and stunning Hawaii really is.  We have travelled many places over the years, and this trip to Hawaii trumps all other locations.
We visited three islands, starting with Oahu. 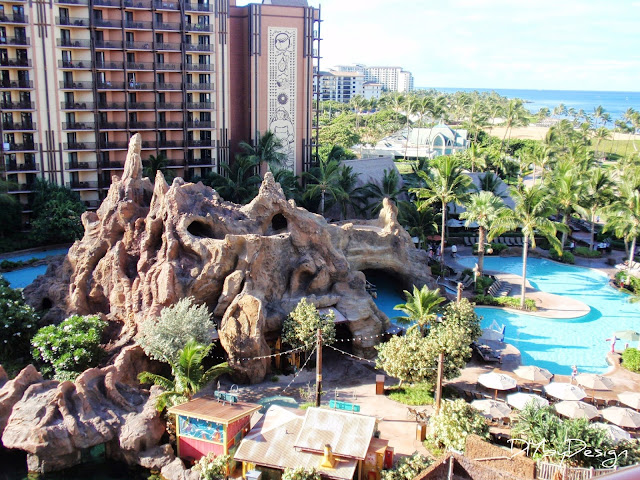 We stayed at the Aulani, a new Disney resort in Kapolei, Hawaii.  For me, one of the best things about the Aulani is that it is outside of the "city".  We stayed in Waikiki on our honeymoon which is filled with mostly high-rises.  It's a bit more low-key in Kapolei.  We traveled with my parents, so we stayed in an 1100 square foot, two bedroom villa which slept all six of us.  The villa had 2 1/2 bathrooms which made it perfect for a family traveling with grandparents.  It was the only hotel we stayed at that had such an option where we could all stay together.  Every other hotel we needed to get two hotel rooms.  As always, Disney is very family oriented.  The rooms are new and perfect.  The villa has a kitchen, although we didn't use it.  But it is an option for families who want to buy some groceries for the room. 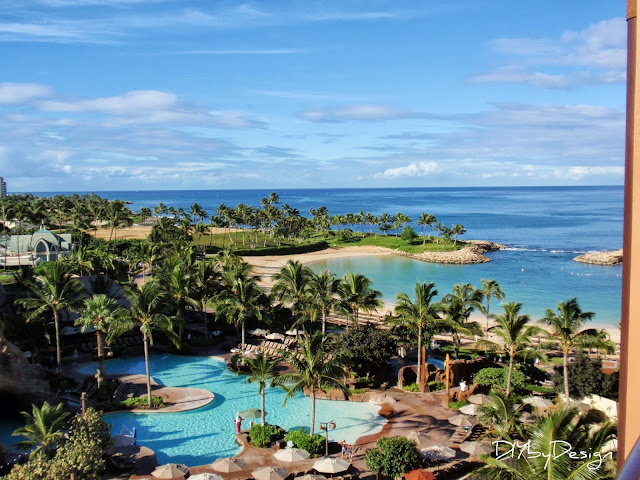 This was the view from our balcony.  This was truly paradise!  The hotel from check-in to check-out was top notch and the lei greeting was wonderful. 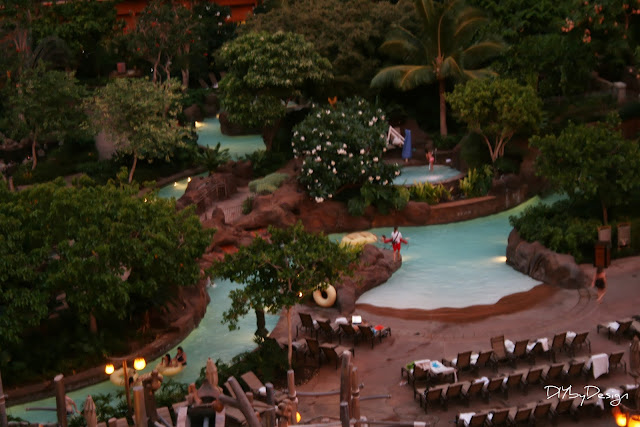 The Aulani has multiple pools and a lazy river.  They have two water slides.  One that you slide down using a float, and the other one you just slide down without a float.  My kids went on both.  I only went down the one with the float.  I'm sorry I didn't try the other one now.  At the time I was pretty jet-lagged and just wanted to relax.  So I mostly floated down the lazy river. 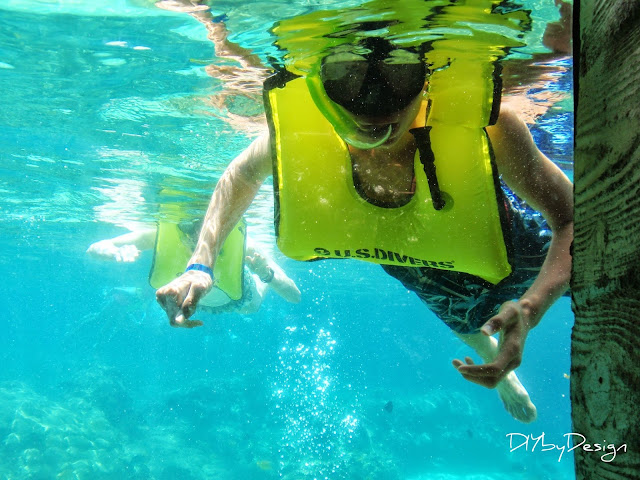 They also had a private snorkeling lagoon.  It was a great way to see all kinds of sea creatures without leaving the pool area of the hotel. 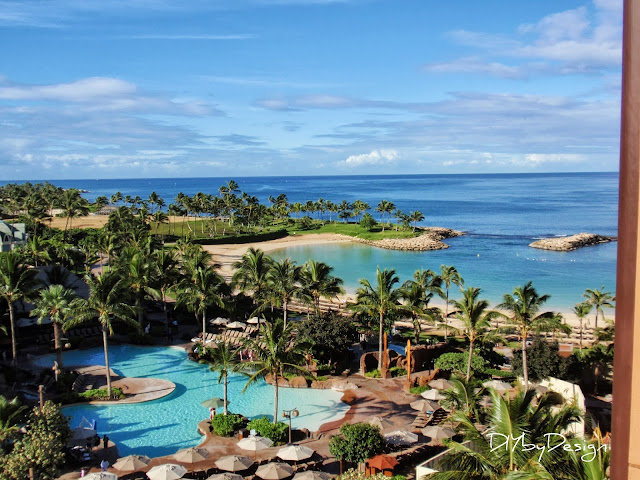 The Aulani also has a larger lagoon which borders the ocean.   There you can rent snorkel equipment, paddle boards, kayaks, boogie boards and stand up paddle boards (my favorite).

The dining options at the Aulani are awesome.  We ate dinner the first night in Oahu at the Ama Ama at the Aulani.  It was wonderful.  The Aulani offers several different options for breakfast including a quick service restaurant where we could order a hot breakfast sandwich.  As you probably know, Hawaii is super expensive when it comes to food.  However, of the three different hotels we stayed at on the three islands, the Aulani was the most reasonably priced when it came to food.  It was expensive, but now in retrospect after seeing what we spent at other hotels, it was the best deal of the three hotels.

The Aulani was absolutely awesome and I would definitely go back again.  There were only two negatives, both completely minor.   One, it was very difficult to get lounge chairs at the pool.  We usually got one, but it took some hunting each day.  The only other negative was the way the pool area is laid out, you have to walk almost all the way around to get from one side to the other.  Depending on which area of the pool you are standing in, there is no quick short-cut across the pool area.

I hope you and your family will get a chance to visit the Aulani.  It's amazing and worth the trip.

What an INCREDIBLE resort Judy! It looks like the perfect place for families and sounds like you had just a wonderful vacation. We love Hawaii too and hope to get back there sometime this year!
Vanessa

We're planning a trip to Hawaii in the next couple of years. I can't wait! Your pictures are gorgeous!

I am excited to see that you stayed here - it's on our list!!! It's so great to hear how the resort actually is & now I'm even more excited about it...
Have a GREAT week & glad you had a wonderful vacation :). ~ Jodie

going there next summer!