There's inspiration behind every makeover.  In this case, there's a story. 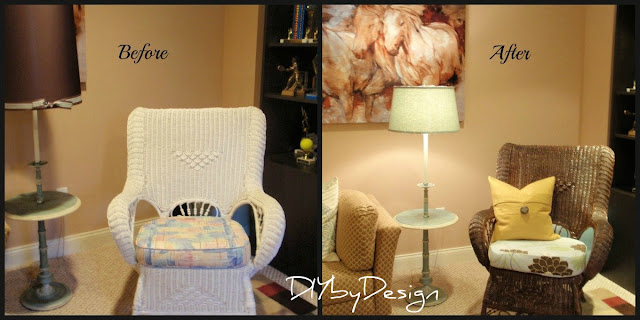 When our cat was sick a few months back she started to pee on the Pottery Barn area rug in our basement.  It started to become a  habit, and after a while, I was literally using my Bissell Spotbot several times a day.  The vet suggested that we add a litter box near the area rug, which has completely eliminated the problem.  Although it has fixed the problem, it created a decorating dilemma. 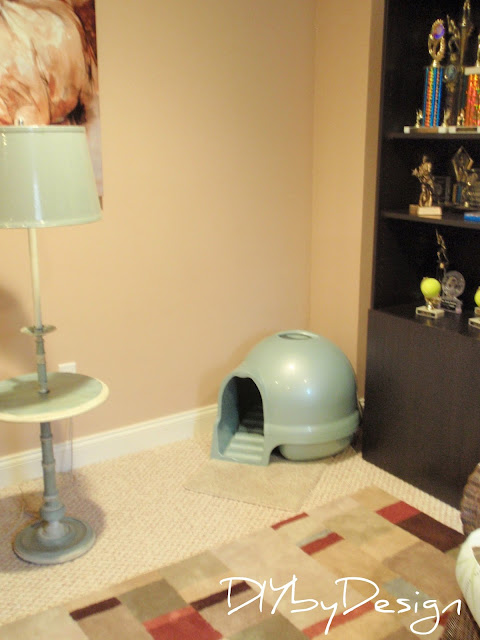 Having a litter box in the corner of the room is not exactly the look I was going for.
Before the litter box, I used to have a small ottoman in the corner.  That wasn't going to work.  I knew I needed something bigger, but really didn't want to go and buy another piece of furniture.  Then I remembered that we had a white wicker chair up in the attic.  It has been up there for more than ten years and I really couldn't remember exactly what it looked like and I also wasn't sure of it's exact dimensions, but it was worth a try. 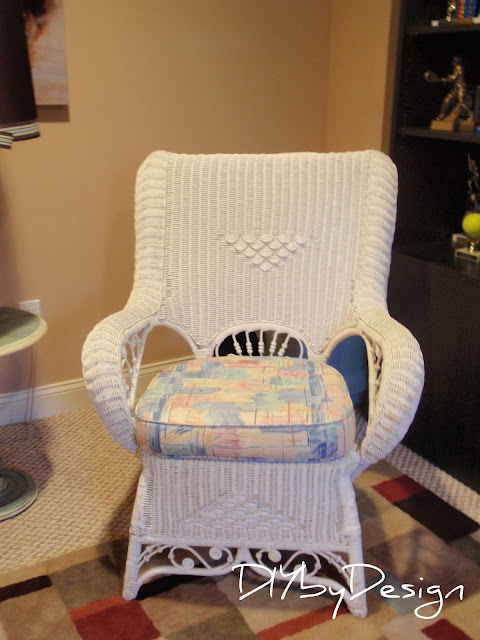 I have no idea how we got this chair up in the attic in the first place.  It was next to impossible to get it out of the attic.  It didn't fit through the opening.  We literally had to push it out scraping up the legs a bit, which didn't matter since I would be painting it.  It took a little bit of vision, but I could see that it would be so much nicer if I painted it a darker color.

This Pottery Barn wicker chair was the look I was going for.
My chair has similar lines, and since I already owned it, it was worth trying to spray it. 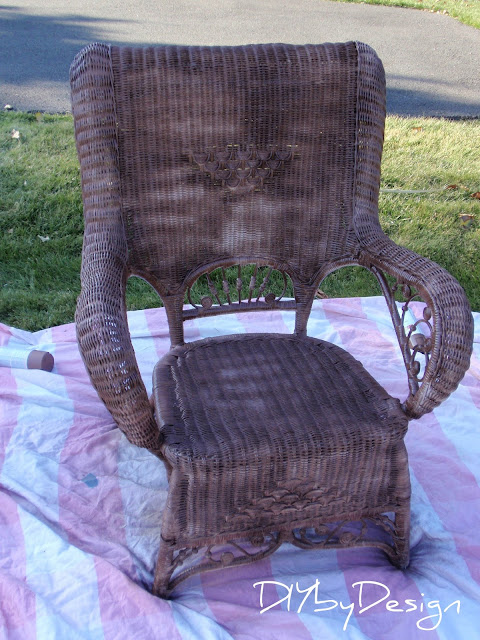 Last week we had one warm day - well not exactly balmy (48 degrees), but warm enough to spray paint (especially since the chances of it being that warm again probably won't happen again until April.  This is what it looked like after one coat of Rustoleum Leather Brown. 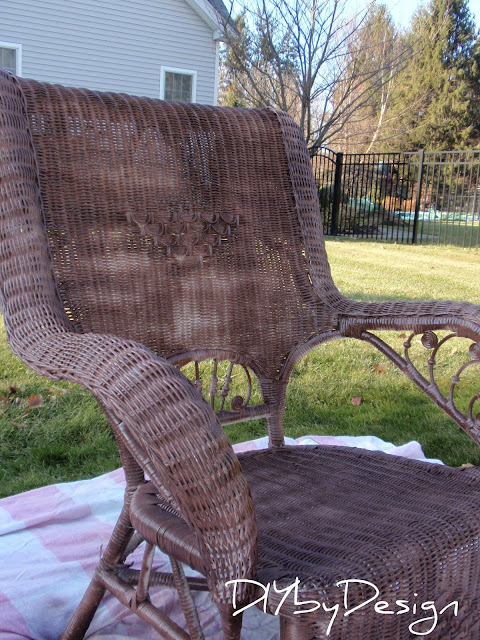 It took three coats total to cover all of the white.  Then I dry-brushed on a combination of black and grey paint to give it some dimension. 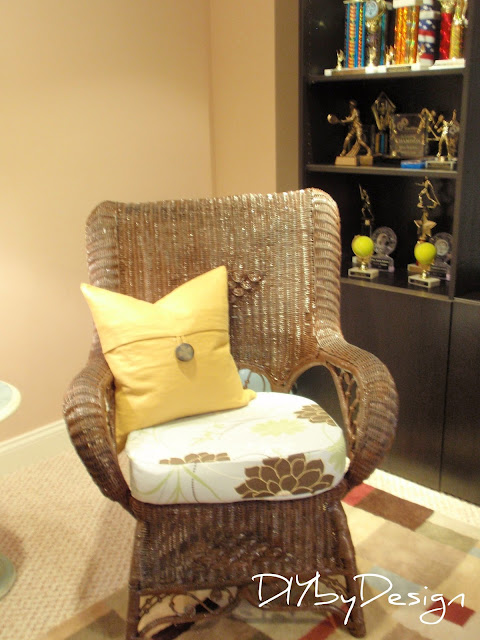 That white splotch you see on the top right is just the light hitting it from above.  The yellow pillow is from Pottery Barn.  I recovered the foam in fabric I already had making a box cushion cover.  Stop back tomorrow for a full tutorial. 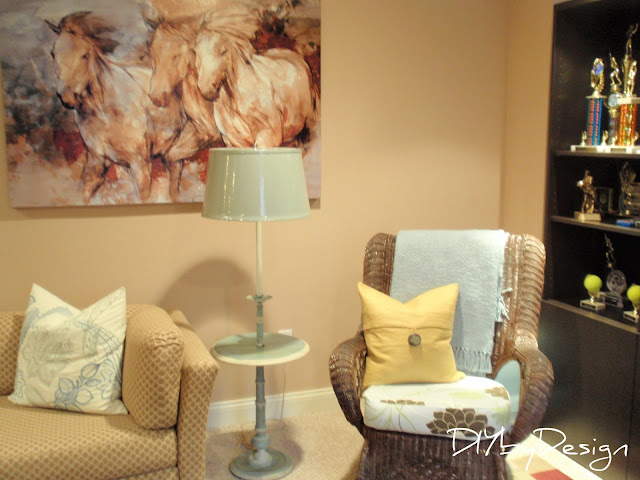 One more thing - we must discuss the new lampshade for this table lamp.  I picked it up at Pottery Barn when I bought the pillow and it is the perfect color for the lamp that I painted a while back with AS chalk paint in Duck Egg. 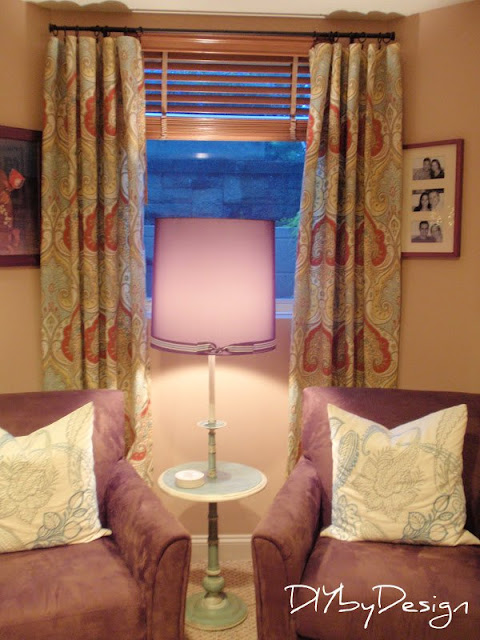 Here is the lampshade before.  I love this brown silk shade.  However, it is about an inch or so wider than the table top on the lamp, and in person it doesn't look right.

Also, when I moved the lamp to the other side of the room, the brown shade really was just too big and blocked the picture behind it.  The new lampshade is a better size - I think.
What do you think?  I'd love to hear your opinion.

The chair makeover is fabulous, isn't it fun to redo something you already have. Looks wonderful. I agree, the new shade is just perfect. Your room is stunning. Hugs, Marty

Tammy @ A Walk in the Countryside said...

Judy, The chair looks fabulous! This came at the right time for me! I recently painted a wicker parson's chair but was not satisfied, so I be "borrowing" your idea! Thanks so much for sharing!!

Hi there! I'm a new follower of yours and I look forward to future visits to your blog. You have lovely and creative ideas :) Have a great day!

The chair turned out great! So glad the cat problem has been solved all around!

Great makeover and I love the new fabric. Beautiful job!

What an amazing job you did, it's just beautiful!
A Bean Bag Bed
Kitchen Tables On Sale
Best Furniture Stores In Denver