This past weekend my son received the Sacrament of Confirmation.  Saturday was his actual Confirmation and Sunday we had a family party.  I have a large extended family and my son invited a ton of kids, so in the end we had 120 people coming to the party.  For the past two weeks the weather has been beautiful here.  So, at 3am Sunday morning when my husband and I woke up to the sound of heavy rain, it was not a good thing.  We started moving furniture out of the family room and emptied the downstairs finished basement figuring we were going to have to move the party inside. 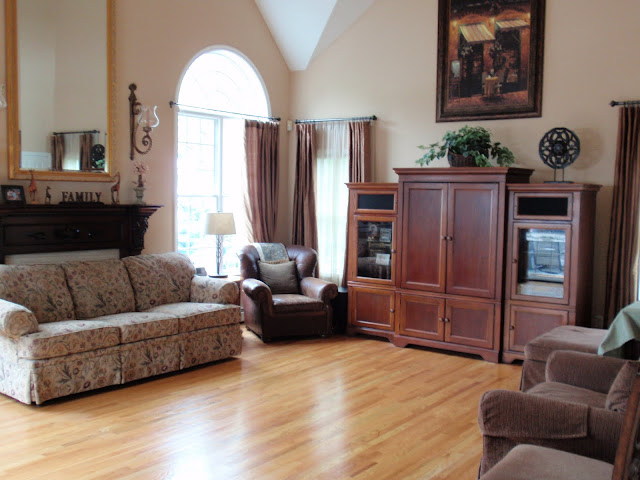 By 10am the rain had started to slow down...enough that it started to look like we could have it outside. We had two large tents, knowing that the weather report was not good.  The good Lord was very kind to me that day.  The rain stopped and it stayed dry until the end of the party.  Literally a half hour after the party ended the rain began again. 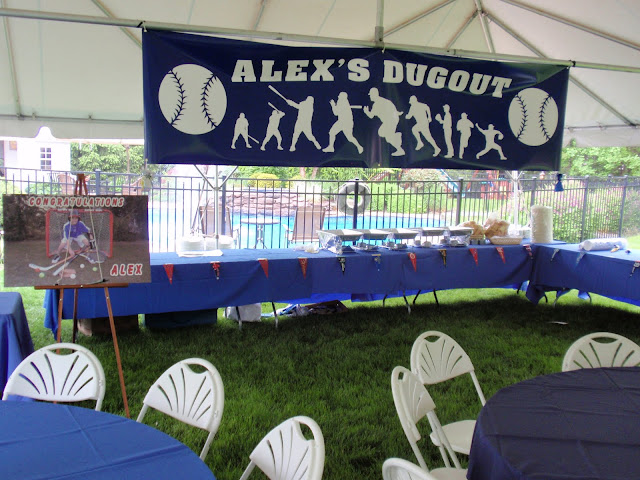 It was a baseball themed party.  As I've mentioned, my son and my husband are visiting all of the MLB stadiums between now and when my son goes to college. 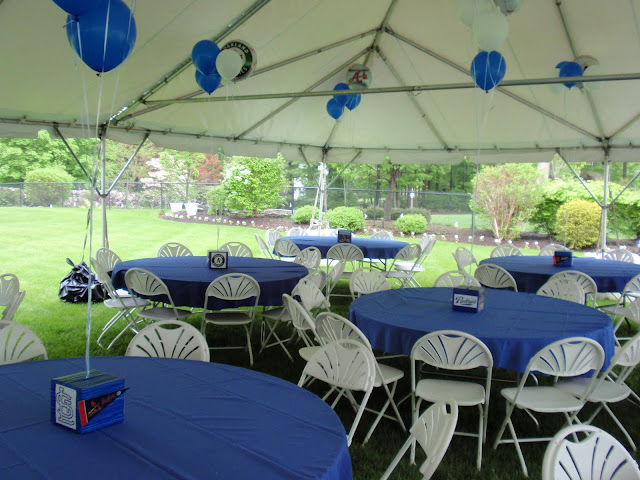 On each of the tables, the centerpiece was a cube with a MLB team logo on one side, the logo on the team's hat on another side, the banner from that team and then a photo of my son in front of that stadium when he visited it. 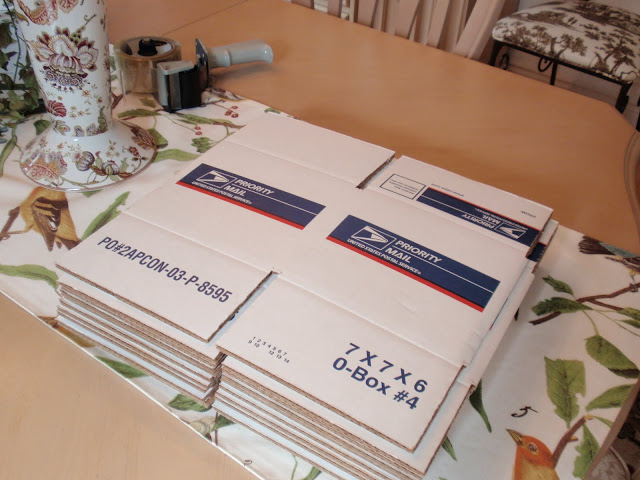 I made each of the twelve centerpieces from scratch.  I started with a 7"x7"x6" box. 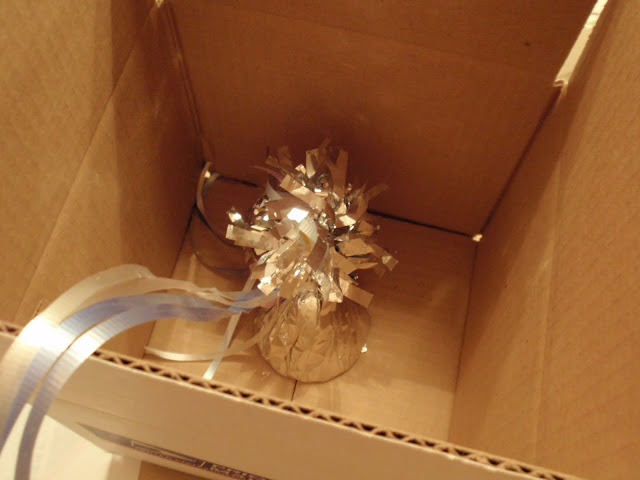 Then I tied five long ribbons onto a weight and taped it to the bottom of the inside of the box. 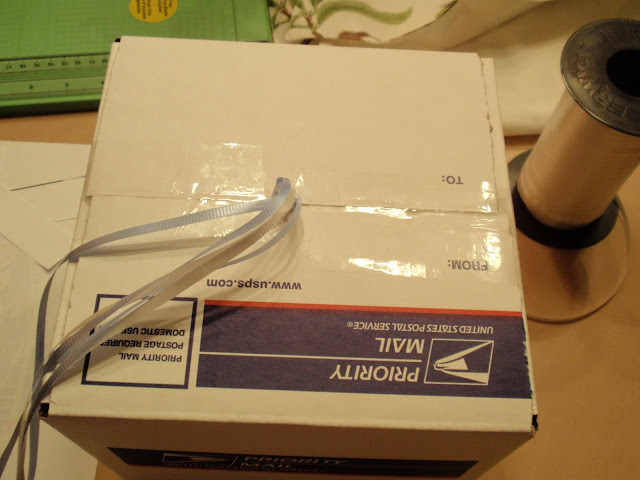 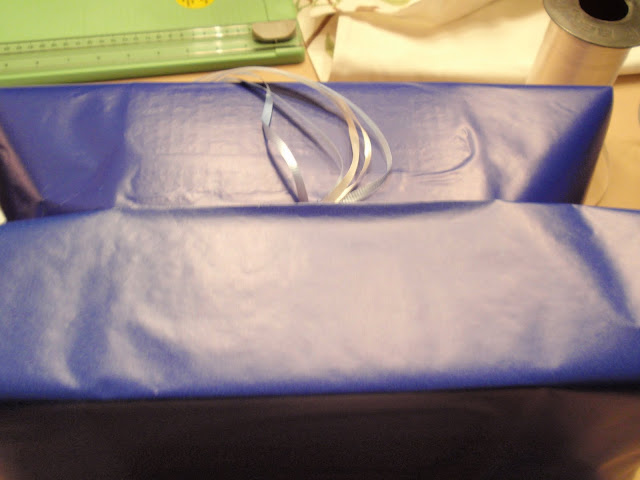 I then wrapped each box with wrapping paper.  I had to use a glue stick because when I used tape, you could see the tape, which just wasn't going to work.  The glue took a little more time, but worked great. 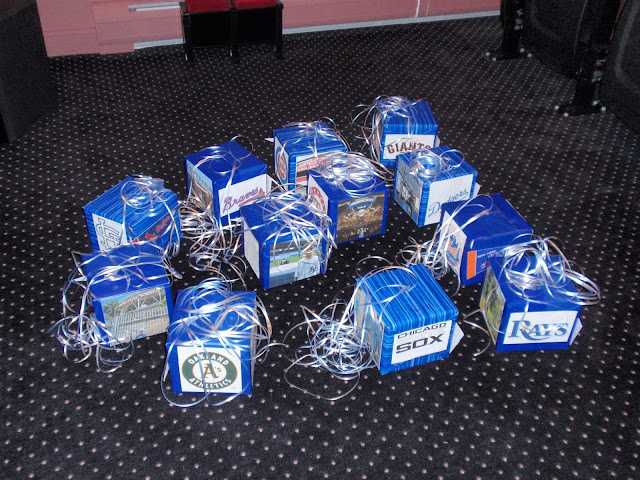 Each box had a different team on it (on the name cards it said which table the person would be sitting at...ie Yankees, Mets etc). 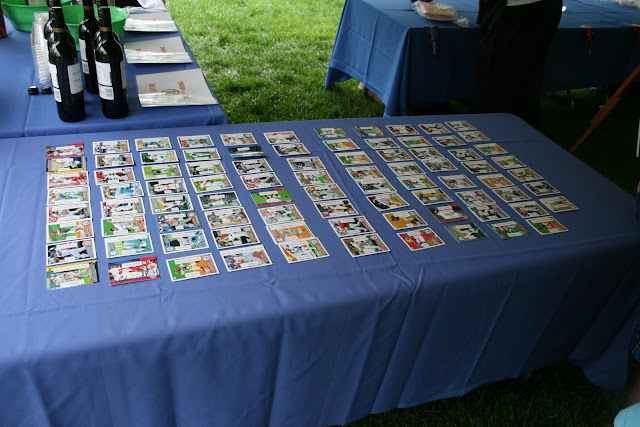 The name cards were baseball cards with a label made for each person.

Here are the centerpieces on the tables...each centerpiece had two blue balloons, two white balloons, and a mylar balloon to match the team on the box. 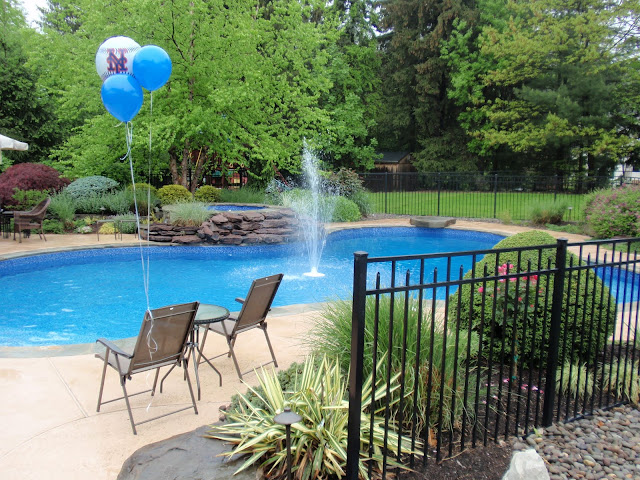 We added a fountain to the center of the pool (it's a great little gadget that you just hook up to where you would your pool vacuum).  You can see how wet everything was from the morning rain, but it mostly dried by party time. 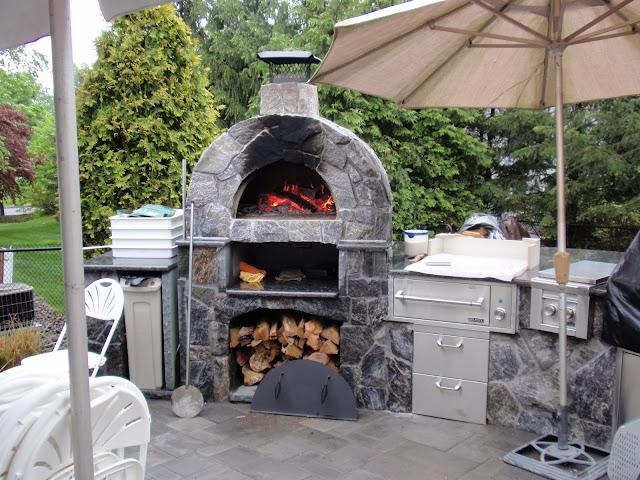 Finally, we hired a pizza guy who turned out over 75 pizzas over the course of the day.  This was in addition to the regular caterer we had hired for the main food. 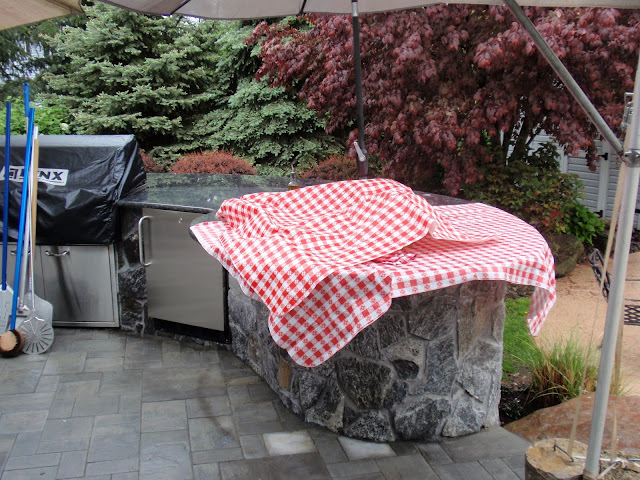 The pizza guy turned out to be a huge hit.  He just started this business of going to parties and making pizza in pizza ovens.  He also has a portable pizza oven if you don't own your own.  He made all of the dough himself and only bought the freshest ingredients.   He brought red and white checkered tablecloths and set out the pizzas there.  Cool concept plus the pizza was the best I have ever tasted.  I will definitely be hiring this person again...hopefully for a smaller scale party.

All in all it was a success.  The party ended at 5pm, but the last of the party guests left at 9:30pm.  Since we had been up since 3am...we were EXHAUSTED.  But it was all worth it...my son and his friends had a blast. 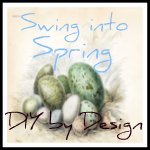 Don't forget my Swing into Spring party opens tonight at 8pm EST.  Hope to see you then.

That just might be the coolest Confirmation party I've ever seen! Congrats to your son!

Wow, I bet you were exhausted! Such creative centerpieces and your yard is beautiful...looks like the perfect place for having fun!
Hope your week is wonderful!
Cindy

looks like a memorable day...and you have such a lovely home and outdoor space for entertaining...congrats on this spiritual milestone for your son.

Congratulations to your son! You must be very proud of him. Your home is perfect for entertaining. Everything looks so nice! So glad the rain held off for you too!

Looks like a fun party despite the rain! I am getting tired of it here and it's predicted all week.

Judy I am so glad the weather held out for you! Looked like an awesome party and how fun having a pizza guy!!

What a great Mom!! How fun that your son and husband are going to see all the MLB stadiums too...such an awesome bonding time. The pizza guy thing looks amazing...I loved everything about this party! Well, minus the fact I wasn't invited! Haha!! :-D Loved the virtual party though!

Congratulations to your son! What a great party to celebrate. I'm so glad the rain stayed away. :)

Your backyard is beautiful!

Ok...you are seriously one cool mom! That looks like such a fantastic party Judy and I just love all of the details! What a special memory you made for your son to mark such a special milestone. :-) And how neat that he and your hubby are making memories visiting all of the stadiums!
Vanessa

You are so clever. And the pizza guy idea is genius.

Oh WOW! It is so cool and all of those details made it really special, I am sure. I am sooooo jealous of your pizza oven. Amazing backyard. :)

What a great party idea, Judy! Love all the wonderful details. Congratulations to your son on his Confirmation :)

I just love a great at home party. Your turned out so fun! I love your centerpiece idea :)

Judy,
I cannot show my 12 year old this party. He will want the same thing. We also play baseball and are headed to Cooperstown NY, in a couple weeks for a week of baseball. Your ideas are awesome and what a great way to throw a party. The pizza idea is great. Maybe I should start my own business making pizzas. How fun would that be!! Thanks for sharing the ideas.

How fun!!! We love baseball at our house. This is a great idea. My hubs made a fountain like that for our pool but with an entirely different pupose in mind - to cool the water. It gets so hot here that the water feels like bathtub water.