It's a Beautiful Day in the Neighborhood

Thank you to everyone who crossed their fingers yesterday for good weather for my husband's work party.  Remember the song from Mr. Rogers Neighborhood?  Am I dating myself??  Well that was the song that kept playing in my head yesterday.  The weather was absolutely perfect.  The rain they predicted didn't show up until 5:30pm, and since the party started at 12pm, the timing worked out great. 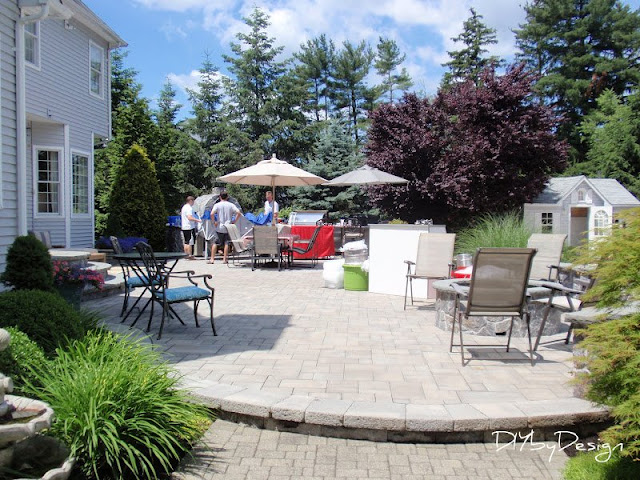 This was when they were still setting up for the party.  We had almost 100 people. 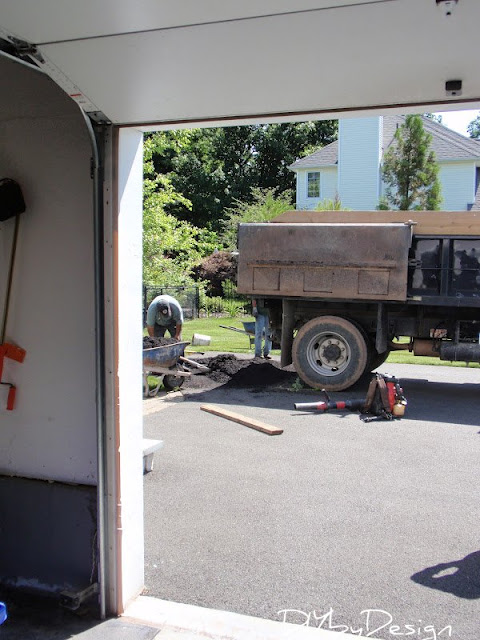 Only we would have our landscapers show up two hours before people did to bring in new mulch. 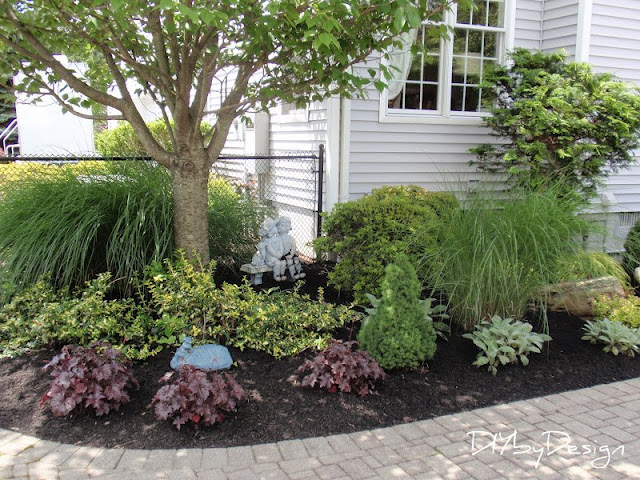 We had ordered it earlier than this, but with all the rain,
this morning was the first time they could get here. 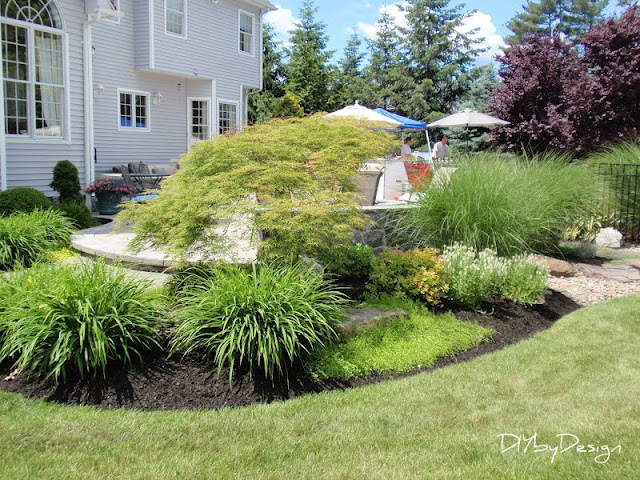 Don't you love how great new mulch makes everything look? 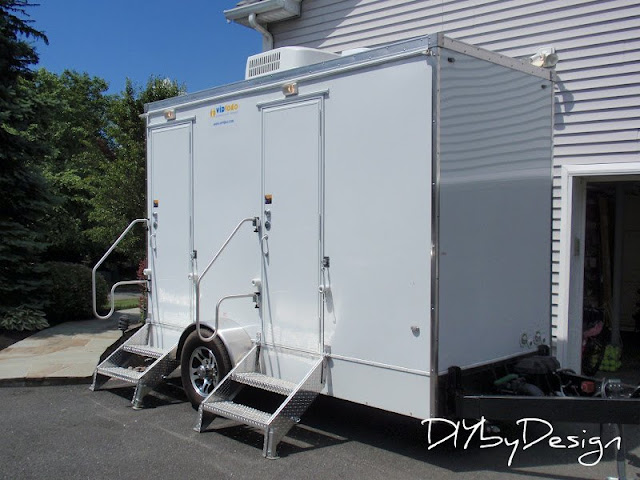 We learned our lesson after the first year hosting this party.
With 100 people... rent a portable bathroom.
However, what a trick it was for the guy to get it into this position. 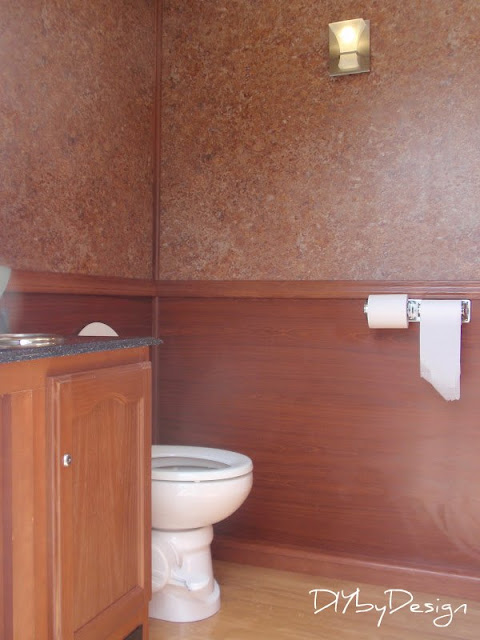 But this wasn't your typical gross port-a-potty.  The interior was nicer then some people's home bathrooms. It was air-conditioned and had music piped in as well. 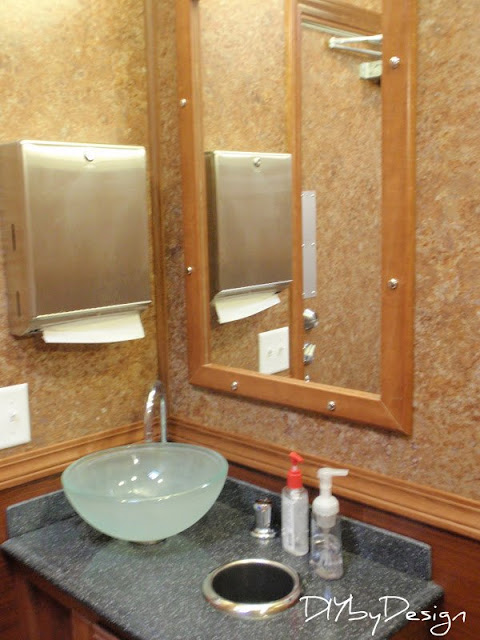 There were two bathrooms which was also helpful with 100 people.
Look how cool the sink looks! 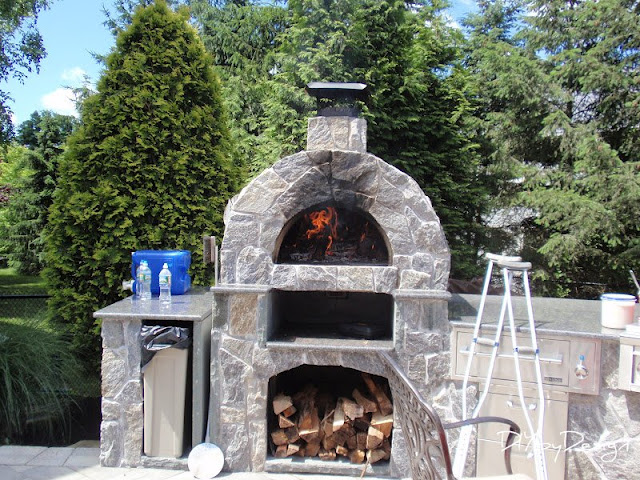 In addition to the regular caterer, we also hired a pizza guy. 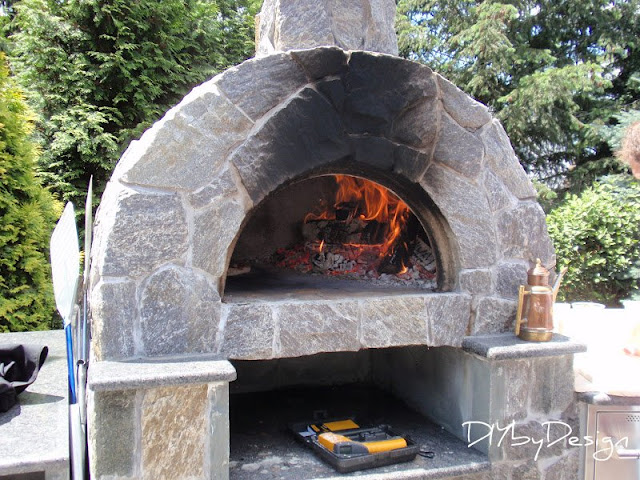 He was cranking out pizza for hours.  He makes his own dough and uses only the freshest ingredients. 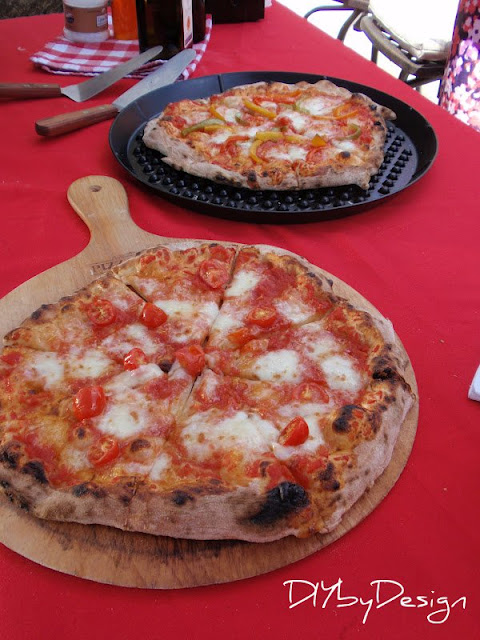 Honestly, it was the best pizza I have ever had. 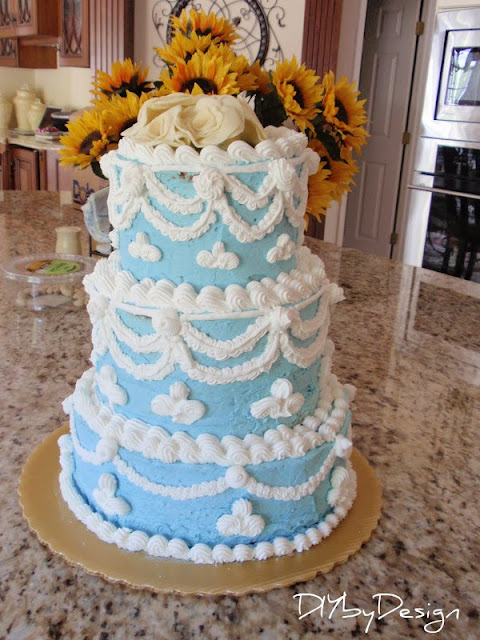 One of the guys who works for my husband made this cake.
He did such an awesome job. 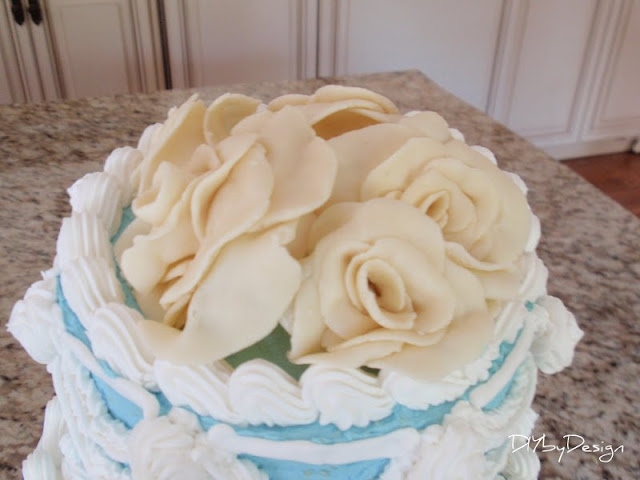 I love the roses on top of the cake.

It was a wonderful day.
The weather being beautiful really helped tremendously in the success of the party.

Have a great weekend.

I'm so glad the rain held out & the party went well! I wish I had one of those pizza right now at 7:55 in the morning! lol

Looks like fabulous day Judy! Your pizza's look fantastic too. We have it mastered now, however, we do not ccok them for a lot of people at one time. Mike and I are a good team though, I roll top them and he cooks them and cuts them. He does the dessert ones too.

Looks like a wonderful party! Isn't it crazy how you obsess and stress over these things beforehand? I'm sure your hubs was super proud to have people over to your lovely home! I'm "mulching" all weekend. :(

I'm so glad everything went off and the weather cooperated, Judy! I am amazed by those portable bathrooms. I have never seen anything so nice. I had to use a portable bathroom at a Renaissance Fair last Fall, it was the most disgusting thing I had ever been in. The pizzas look delicious and that cake is gorgeous. It sounds like all the guests look forward to this party, too, which is a nice compliment to both you and your hubby.

Looks great.. I'm so glad you had good weather. I'm sure everyone had a wonderful time.

Wow! What an incredible party Judy and those port-a-potty's are amazing. Glad the weather held out for you and your yard looked just beautiful! :-)
Vanessa

Looks like a fantastic afternoon. I am so happy for you that the rain held off and you had nice weather. Love the cake

Hi darling, I'm glad the rains held off. Your backyard is the perfect setting for your party. The pizza looks delicious, the cake is gorgeous. hugs ~lynne~

I am so thrilled for you the weather cooperated. Looks like a fabulous party, and that pizza looks soooooooooooo good. The "pottys" are amazing. Great idea. Hugs, Marty

So glad the weather cooperated! Your yard looks lovely.

I h!ave never seen one of those fancy portable bathrooms. Where have I been??

Glad you had a fun time

It's always a beautiful day in YOUR neighborhood! Glad the weather complied with your plans...

Glad to hear the rain held out for your party. The gardens look great! We just mulched, too, and I love how fresh and clean it makes everything look.

Those are the same port-a-johns we use for the Challenger Tennis Tournament each year. I never thought of renting them for large parties, but it makes so much sense.

The pizzas look delicious, and that cake is gorgeous! Looks like a terrific time. Thanks for sharing.

I never thought I would live to see a pretty porta-potty...

and you very own pizza guy? holy smokes... heaven.

wow- can't get over the portables- so stinkin clean and nice. Not sure where these are parked when I need to use one!

Kara at Petals to Picots said...

Wow...did not know they had such great "porta potties" you can rent...Sounds and looks like you had a great successful party....and I am in awe of your pizza oven.
Everything looked wonderful!

So happy to hear the rain held off! The new mulch looks great and those bathrooms were atually really nice looking. Glad you had a great day!

You have a beautiful blog with a lot of inspiring posts! Congrats on your work! Would you like t follow each other?:)

Looks like your party was a smashing success! Would love to see more pics (oh, and a piece of pizza, please)!

I just love the look of fresh mulch! I'm so glad the weather was nice. That pizza & cake look amazing!