After working on my downstairs bathroom for a few weeks, I finally settled on a paint color.  Last weekend I painted the bathroom Benjamin Moore Glacier Lake. 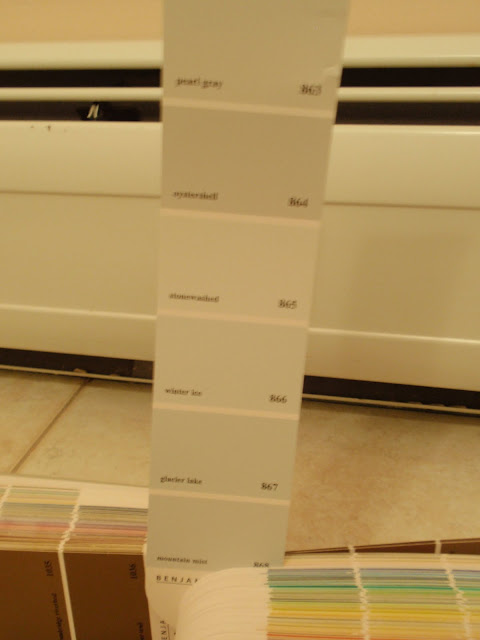 What a difference a gallon of paint can make. 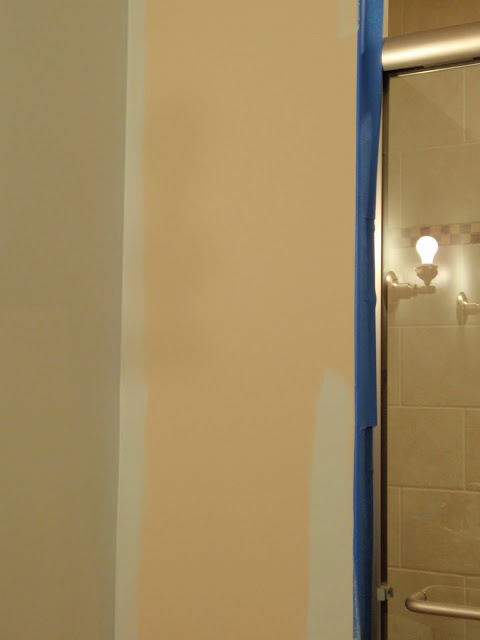 I finally got rid of the flesh colored walls that have been haunting me for months and replaced it with this awesome color that added much needed life to the bathroom. 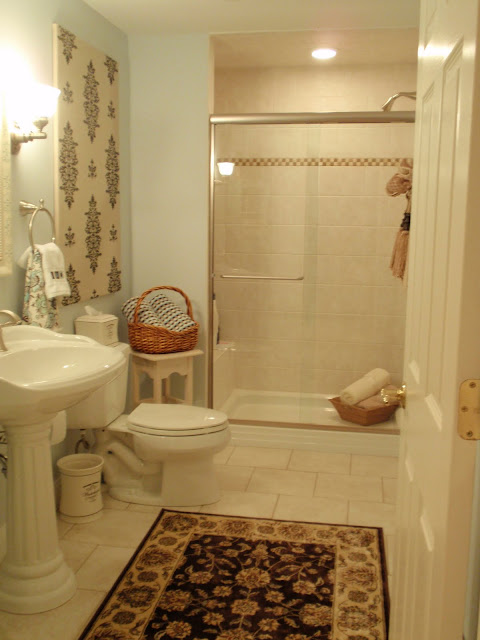 Here is the reveal!!  I absolutely love the transformation. 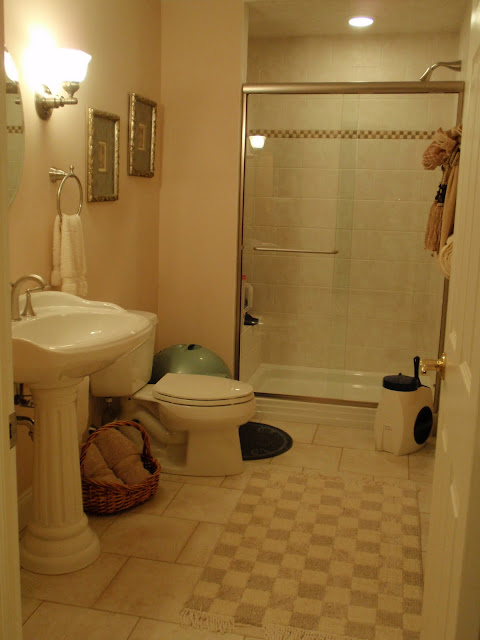 This is where this bathroom began.  Blah, blah, blah.


I started by painting an old cabinet using chalk paint.  I used Anne Sloan chalk paint in Duck Egg.  You can check it out here how I did it. 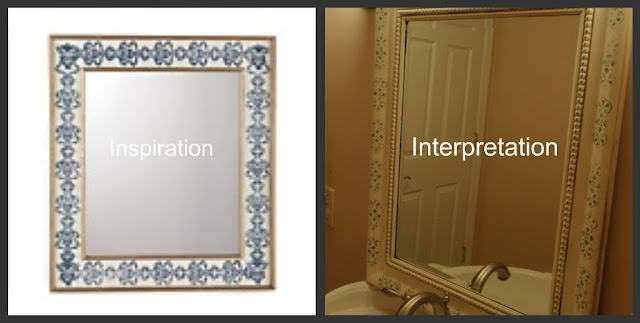 I then transformed a mirror I had in a closet using inspiration from a catalog.  Check that out here.  Then I went to Home Goods and bought some new accessories, rug, towels in my new color scheme. 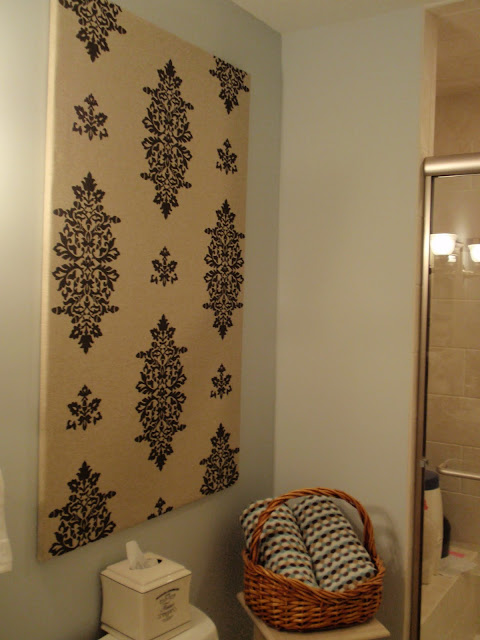 This has to be my favorite new addition to the bathroom. 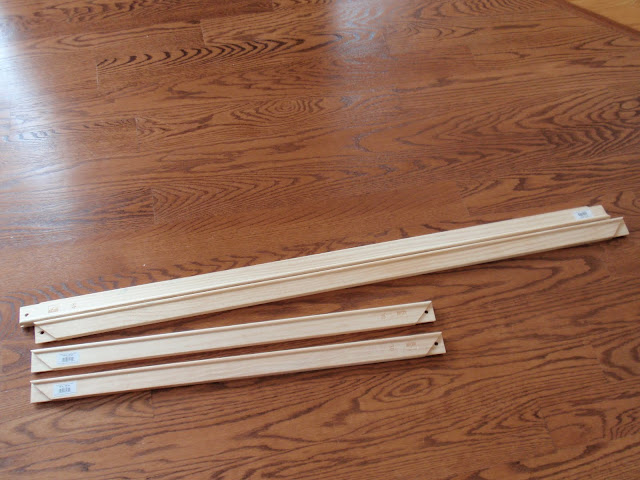 I went to Michaels craft store and bought four pieces of pre-cut wood to create a frame.  I found these in the aisle where art canvas' and paints are found.  Usually canvas is stretched over these frames.  Instead I had some awesome fabric I had never used that I wanted to stretch over this frame. 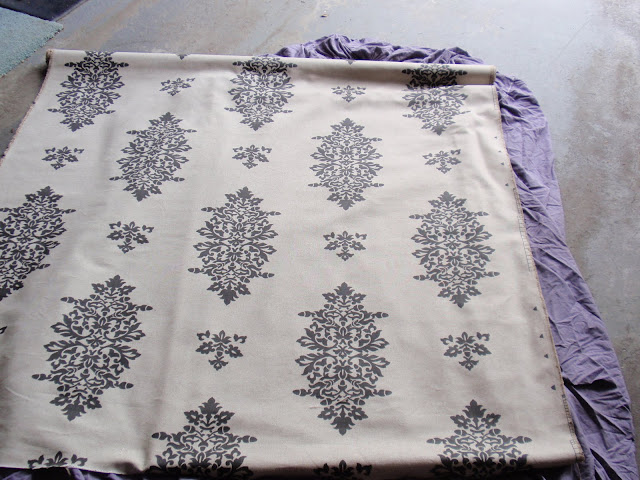 After putting the frame together (which just snaps together like a puzzle) I laid the fabric over the frame and decided how I wanted the pattern positioned.  I then cut the fabric leaving approximately 2" on all four sides. 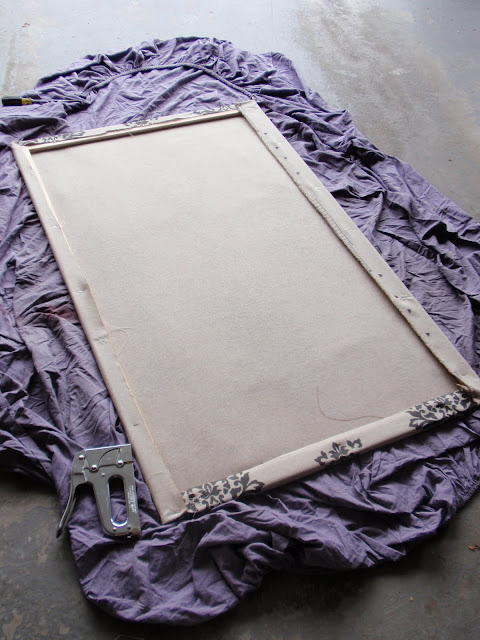 Then using my staple gun, I stapled and stretched the fabric over the frame. 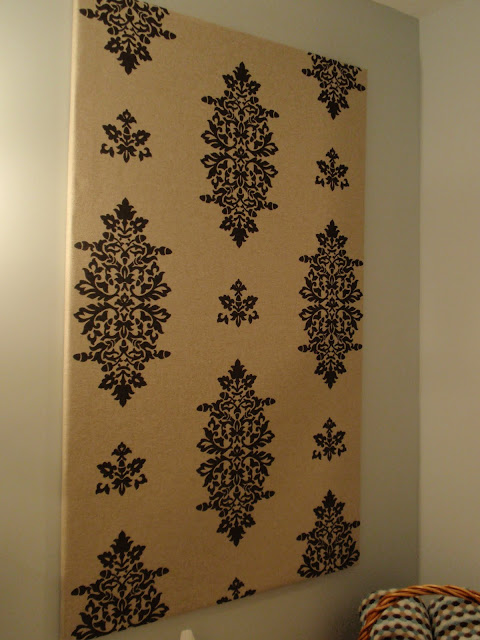 In less than 15 minutes I had this super cool "art" for the wall.  My original intention was to stencil the bathroom.  After looking at the bathroom night after night and trying to visualize the stenciled walls, I decided this would be a better way to add some graphic pattern to the walls.
Much less work, less commitment, and less busy looking. 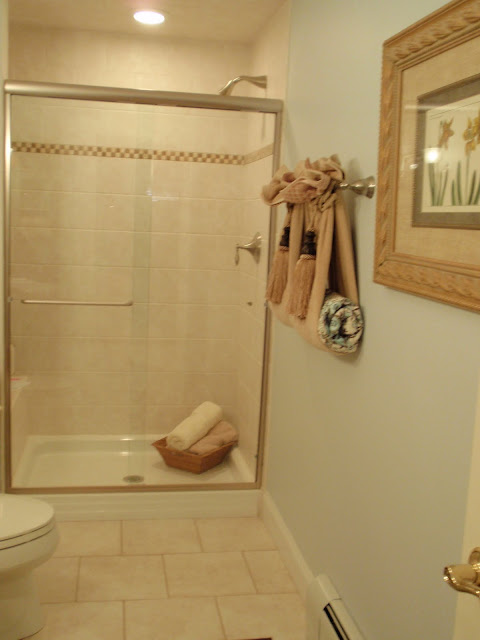 I also added a basket with towels for guests to use.  I have some "show" towels in the bathroom, but I also needed some that guests can actually use.  The basket is easy to remove before a shower and by placing the basket in the shower, it makes the room appear deeper.  It's an optical illusion, but any illusion to make a space look larger I'm willing to try. 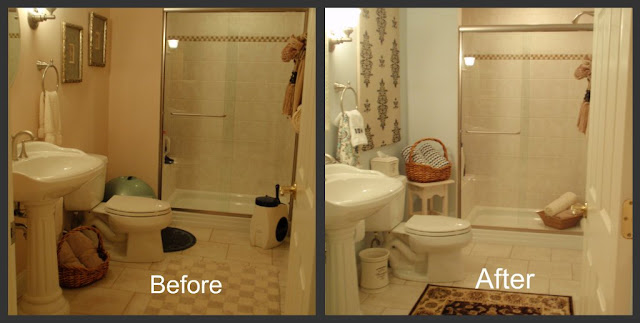 I'm loving the new look...how about you?  The lighting has not changed in the room at all, but doesn't the after photo look so much brighter.  That's not just the photo...that's really how the room appears now.  I can't wait to hear what you think.

Looks great Judy. I love your art idea too!~

That art is striking and you are so right on about the basket of towels in the shower adding depth to the room. It's amazing. It looks much more spa-like. Love it -nice job!!

I loved your fabric artwork...the pattern is lovely. The bathroom is looking great now...and definitely much brighter.

Judy, it looks terrific! I love the new paint color, and it definitely does brighten up the room. Your art idea is so creative! Great job! Enjoy :)

It looks amazing! I love the color you chose for the walls, and that art project is awesome! I'm going to have to steal that idea.

You did such a great job!

Thanks for stopping by my blog this morning! Christine from Design Esquire

What a great color, Judy! It looks wonderful in your bathroom! Love the fabric canvas you made ~ it definitely adds that final touch to the look. I think it looks amazing. I'll bet you can't stop looking at it! : ) I'll be keeping this color in mind.

flesh color should only ever be on...well...flesh! your bath looks lovely now...the wall color is perfect and the accents you chose are sublime...adore the fabric art piece too...thanks for sharing!

yes it does look brighter! that was my first thought. Enjoy, it is beautiful!

That's quite a difference! It looks fabulous. The canvas idea is very creative too.

Love it! It looks so fresh and classy. One question...I have very similar shower doors and they give me FITS trying to keep them clean. What have you found to work well? Mine is brassy too (I think yours is)and some cleaners I have used try to take the finish off.

Looks great! And I think I have to make a fabric frame art piece now!!!

Your bathroom transformation is amazing! While reading your post, I kept thinking, "Where did she get that beautiful art piece"? How clever you are! Love it all!

Wow, what a difference paint can make for sure. I love the new color and your art. It all came together so well. Another project to check off your list now. Great job.

It looks beautiful, Judy! My guest bath is the same color as the before picture and I absolutely LOVE the difference your new paint color made. I am making a note of the color you used. Love everything else, as well. Stunning! :) Thanks do much for linking up! Have a great week! :)
Crystal
Homemaker in Heels

Pretty! And I love the fabric you used for the stretched canvas - what a great print! Wonderful new look.

Looks Great! I love the color.

It's amazing to see how you've brightened the room! And I love the way you have the towels...a towel within a towel. Really neat.

It's beautiful! Incredible what a simple paint color change can do, isn't it?!! I love the fabric/canvas idea, too!

What a great transformation! Love the colors. Great job on your interpretation and artwork.

The whole room looks amazing! Your new art is my favorite too! I love that fabric. What a great way to add a graphic pattern! And way easier than stenciling!

What a difference! It looks great. I'm feeling inspired...maybe it's time to tackle the main bathroom....

Incredible transformation! It looks so much bigger and brighter! It's amazing what some paint can do. Love the fabric artwork! Great graphic piece and a much smaller commitment than stenciling the walls. Everything looks great! Thanks for sharing.

It looks so good! The art piece you created is fabulous! You are so very clever...think I'm going to be borrowing your brilliant idea! Great job on the transformation.

Whew, just catching up with my reader and boy have you been busy! Love love the bathroom. That color really made a difference in there! The fabric panel is so darn smart! I have seen those at Michaels and thought about doing the same thing! I have tons of "favorite" fabrics that I have been holding on to, I just might try this. Oh and the trash to treasure chairs, stunning! The pool cabana? Love it. Oh and I also noticed that you won a design package on the blog finding fabulous
http://www.findingfabulousblog.com/2011/06/home-grown-interiors-rooms-in-box.html I saw the name and got all excited that you won! How exciting! Great to catch up, love reading your blog.

Been searching and collecting an images and idea like this about Bathroom and Kitchen Renovations for my school research project. The information and image presented here is really wonderful! I have
bookmarked this webpage and will be included to my report.

Looks great! Love it...can't wait to hear about your trip!

Looks awesome! Isn't it funny how much work the seemingly smallest project are??! It's never a walk in the park. Love the new wall color. A real pick me up for the room.:)

What an amazing transformation! Your colour palette, textures and overall feel are an inspiration for my home. Beautiful!