How to Transform an Ugly Ceiling Fan

How was your weekend?  Ours was extremely busy.  As I've mentioned, my brother and his wife and their 2 1/2 year old twins just moved into their new home.  Our housewarming gift to them was for me to decorate their kids new rooms.  They moved from a one bedroom apartment in New York City to a three bedroom townhouse.  For the first time Lexi and Joey (my 2 1/2 year old niece and nephew) will have their own room.  They had no furniture so I had a clean slate to work with.  I spent all day yesterday working in Lexi's room.  There was so much to do. 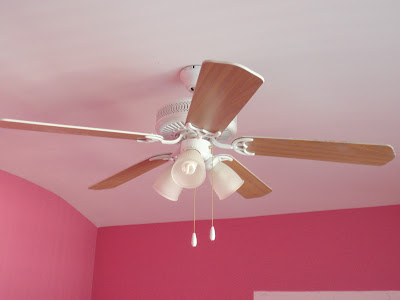 The ceiling fan in Lexi's new room wasn't very girly at all. 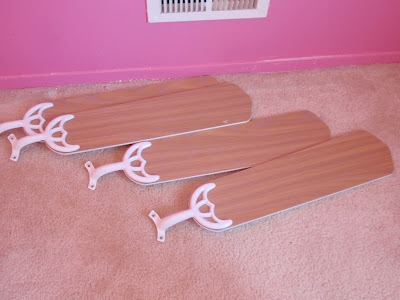 It had fake wood blades that didn't match anything.  I had planned on painting the blades.  However, after taking down the blades, I discovered that the other side was white (yay...one less thing to paint).
All I had to do was flip over the blades and reattach the brackets. 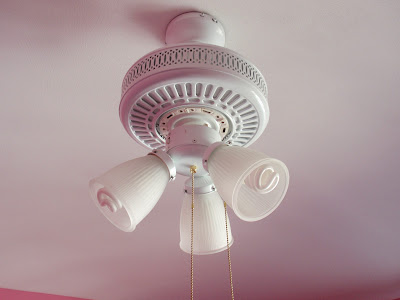 We also took down the glass light covers and washed everything.  We vacuumed the motor of the ceiling fan as well.  It was amazing how much better it looked already just by cleaning it. 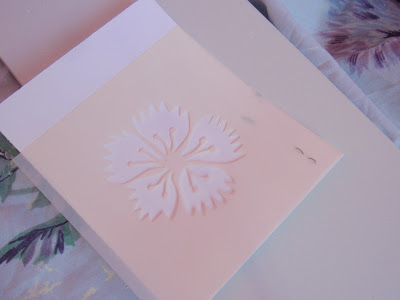 Then using a stencil and the left over paint the seller's had left that matched the existing wall color,
I began my transformation. 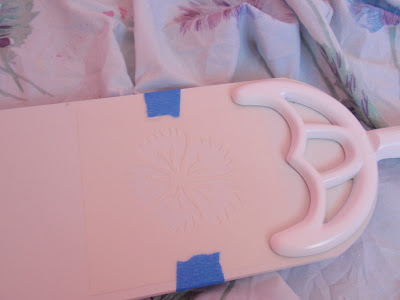 Using blue tape, I taped the stencil in place.  Then I used a foam brush and after dabbing off most of the paint, used a pouncing motion to fill in the stencil. 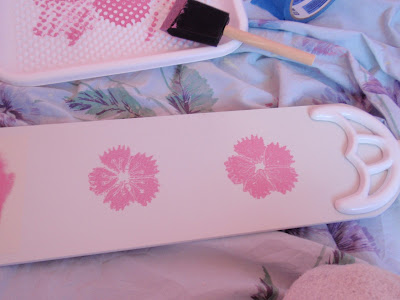 I stenciled three across each blade. 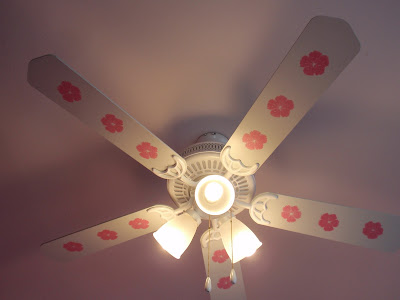 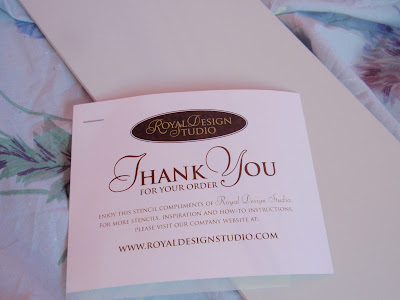 Speaking of stencils, I have a very big surprise for you later this week.  For starters, I will be revealing what I did with the rest of Lexi's room (and I must say, it's amazing what you can accomplish in one day).  In addition,  I have a very special giveaway planned as well.  You won't want to miss it.
-Judy
Posted by DIYbyDesign at 5:06:00 PM

How cute! This is a great idea to use for my kitchen fan that I've been wanting to redo for quite some time, thanks :)

Your fan turned out so cute. One of those things you don't think of re doing but what a great idea. Thanks for posting the how to.

Adorable!!! I love using stencils and this simple project is very easy to achieve. I'm sure there will be many little girls’ rooms sporting this idea.

So cute! I'll have to remember this when I get super annoyed with an ugly ceiling fan. Thanks for sharing!

What a great idea Judy!! I just love how something so simple can make such a big impact and it is darling. Can't wait to see the rest! :-)
Vanessa

This is a great idea, much better than taking out the fan as so many decorators do. I like the practicality of fans, whether they are "in" or not.

I love this! So cute!

That is so cute, Judy! Great luck that the other side was white already! Haha, let me know when you are doing yours, because I have one, too. This way we won't conflict! : )

That is so cute & a super idea!

So cute and what a great way to repurpose :-)

Looks great! She must be so excited! Thanks for sharing.

So cute and much better!! I can't wait to see the completed room, I am sure it was so fun to decorate!

This is a great idea to use for my kitchen fan that I've been wanting to redo for quite some time, Hope it will be like my all family.

Hi! What a great idea! My sewing room fan is less than appealing, but I HAVE to have it! When my creative juices start flowing it gets awfully warm in there. This will be my next project! Thanks for sharing it. Also....I was recently the winner of a Royal Design Giveaway by Rhoda at SouthernHospitality and am anxiously awaiting my large Moorish trellis stencil! In the meantime...I'm going to use a smaller design on my fan! Can't wait to see the twins' room reveal. Thanks...and have a great day!
Judy

What a fabulous idea! And it turned out super cute! I am so happy to have you share this @ Show & Share, thank you!

This is such a cool idea, Judy! Stencils and paint can transform just about anything. Who would have thought that dull fans can look extra fly with a little paint job? =) I've seen how Lexi's room turned out, and you sure did a terrific job. :o)

Wow!! Its a really great ideas of transforming normal ceiling fans into designer ceiling fans.It was such a pleasure reading your blog. Thanks so much for sharing this wonderful blog with everyone.

Online shopping for small ceiling fans for kitchen from a great selection at Ortem Fans.

It is a great Article and really helpful to us. It helps me to understand it clearly. Thanks a lot.
buy best mist fan supplier in dubai 2019

Such a good information of Ceiling Fans/

We offer services of top-grade Washing machine repair Dubai Deira at affordable prices. Some of the popular brands of appliances available in the market include Whirlpool, LG, Samsung, and so on, we offer cost-effective, convenient, and offers a high-quality repair. You can even find our contact details and address through which you can contact us directly. In this way, you will be able to avail yourself of our professional services without any hassles.