My son gets very into Halloween.
Not just for the candy, but each year he tries to top his costume from the year before.
This year he decided to dress up like a werewolf.
Here is his transformation step by step. 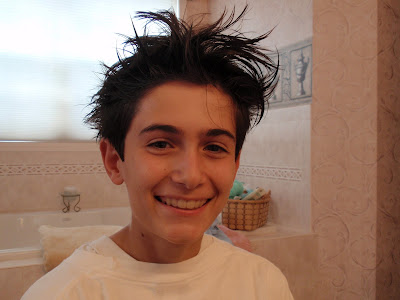 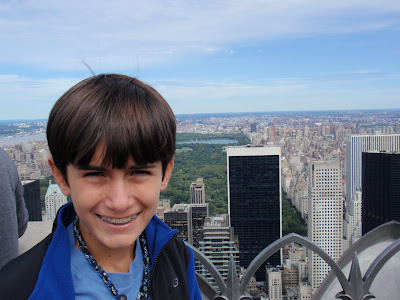 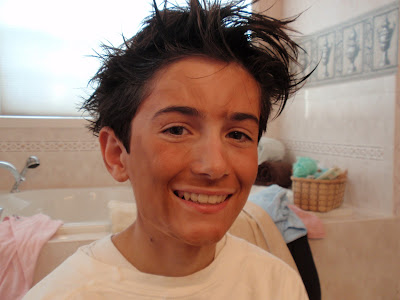 Step 2 - Start to apply the makeup 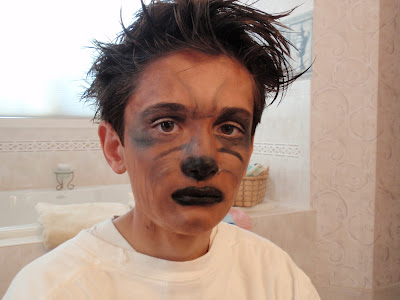 Step 3 - Add the details to the makeup.
Then it was time to add the werewolf hair.  I used spirit gum and applied it to my son's face and they cut the fake hair and added it a small piece at a time. 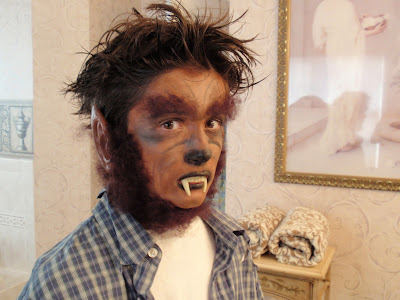 Step 4 - I also used the spirit gum to attach the ears and was careful in adding the eyebrows that I glued them above his own eyebrows so as not to "wax" his eyebrows when I took this off later. 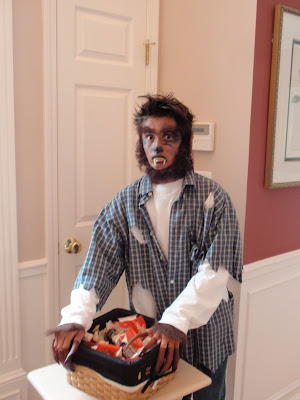 We put him in charge of the candy. 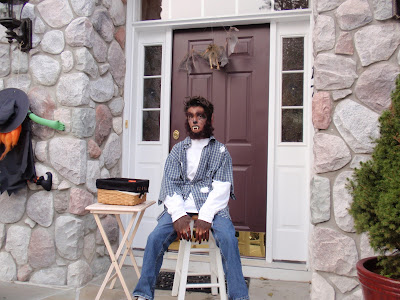 He sat in the front of the house and gave out the candy until it got dark and then he went out with his friends trick or treating.  He got a ton of attention.  Some of the little kids were afraid to take the candy from him.  Some of the parents stopped their cars and got out and took photos of him.
We all had a blast. 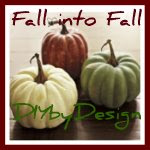 Don't forget to stop back tonight at 8pm EST to join in my Fall into Fall party. 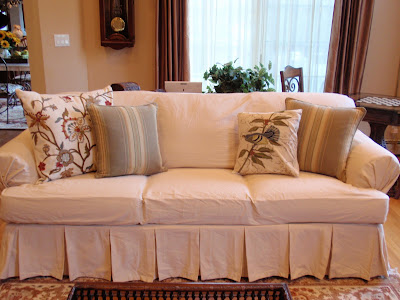 Also, you can click here to enter my Ugly Sofa slipcover giveaway.  Just in time for holiday decorating.

Wow, Judy, you did a great job! He looks fantastic! Did he love it? I remember doing make up on my kids for certain Halloween costumes they wore. I wonder, did some people think he was one of those life-sized Halloween figures? We had a neighbor years ago that would sit outside in a chair in whatever costume for that year, and when you'd go up to the door he'd get up or do something.

He looks amazing. I think I might have been a little afraid to get the candy from him too, lol.

Hello Bloggin'Friend...my goodness but time flies when your havin' fun bloggin' and livin' life. I've been doing lots of both without much time for visiting, so I'm just droppin' in to say Howdy, and invite you to stop by CollectInTexas Gal.

As times change for all of us, our Blogs seem to reflect those changes in our interests, and CITexas Gal has changed a bit with the addition of Tracks of My Texas Ancestors. Yep, I've been bitten by the Genealogy Bloggin' Bug.

I'd love to share the Blogging Genealogy Community with you. I hope you will have a minute to stop by and see/read the 'May I Introduce You To' interview Feature on CollectInTexas Gal/Tracks of My Texas Ancestors by GeneaBlogger.

Awesome costume and makeup! But where is all the snow?

Thats so cool. Fantastic job on the costume! :)

Cute, cute! Sounds like y'all had lots of fun together!

Not surprisingly, you are a master of make-up. No wonder he's into the whole dress-up thing!

Oh wow, he looks so scary! You did an incredible job with the makeup.

his costume looked teriffic! Glad you had a nice halloween.

What fun! He looks amazing! Great job with the transformation! Thanks for sharing.

What a hoot! Great job on the makeup, girl! :) I actually kinda like his hair up like that....lol!

Awesome!! You both did a great job making a werewolf!! I'm not surprised some of the little kids were scared of him!!

Incredible! I'm not sure if you will respond in time before this Halloween but where did you buy the fur and the spirit gum? Thanks in advance!

"Insightful" is the perfect word to describe this wonderful writing of yours. The artistic blend of this subject with your tone of writing made this a great read. Much love 😘.
How to bottom