My brother and his wife and their 2 1/2 year old twins just moved into a new home.  I am decorating both of the kids bedrooms (they have a boy and a girl).  They had an Ikea Malm dresser that they wanted to use in one of the kids rooms.  They gave it to me and told me I could do whatever I wanted to do with it.  I decided I would use it in their son's room. 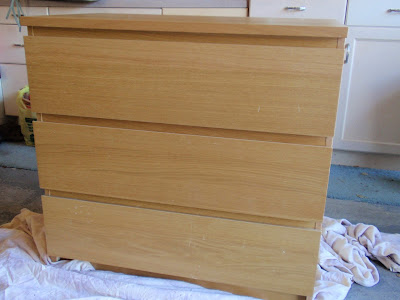 I started by lightly sanding the entire thing just to rough it up to make the paint adhere better. 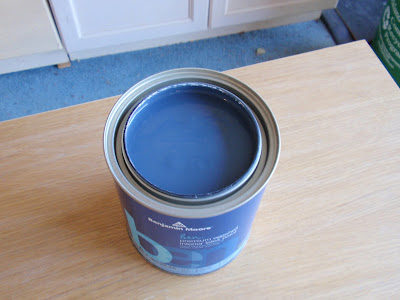 I chose the color Newburyport Blue by Benjamin Moore in their Ben formulation which is low VOC. 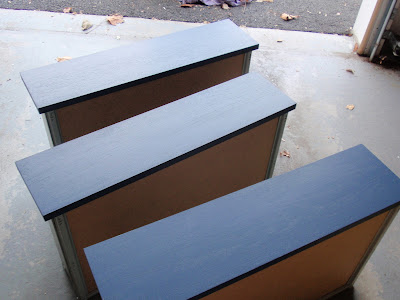 I removed the drawers and painted them with two coats. 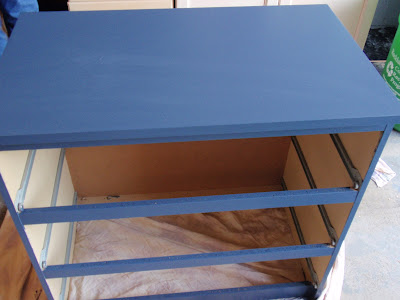 I did the same with the body of the dresser. 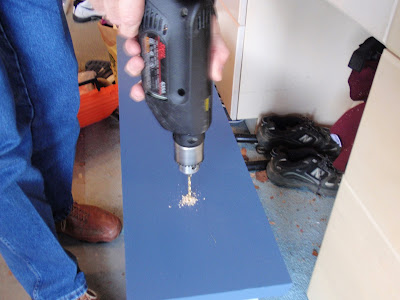 Then I drilled two holes in each draw 6 1/2" in from each edge and centered from top to bottom. 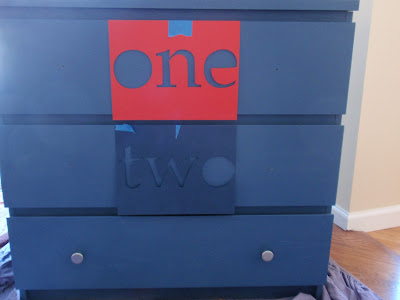 I wanted to come up with a fun design for a 2 1/2 year old that would grow with him for a while.  I also knew I wanted to incorporate his favorite color - red.  So using my Silhouette machine I created three stencils (one, two and three).  I installed the bottom knobs only so that I could get a frame of reference as to where I wanted the stencils. 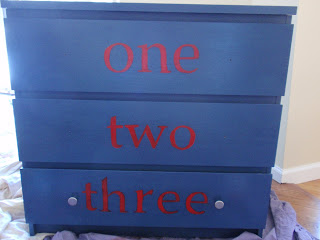 Then using red paint I stenciled the words onto the dresser. 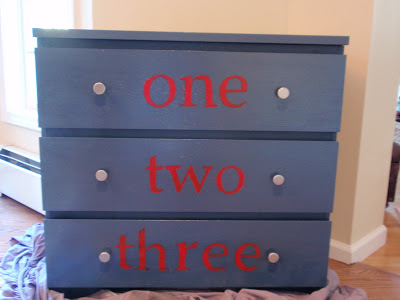 Then I added two coats of clear polyurethane to protect the piece.
What do you think?  I can't wait to get started on his room.  We are going there on Sunday and both rooms will be worked on then.  By next week I should have some photos to share with you of the finished (hopefully) rooms.

Also, you can click here to enter my Ugly Sofa slipcover giveaway.  Today is the last day to enter.
The winner will be announced tomorrow.

Very cute, Judy! Love the colors. I'm a little tired still this morning... when you said he was 2 1/2, I initially thought you were going to put 2 1/2 on the bottom drawer :)

super cute! I love it.

The dresser looks great! I just painted some Newburyport blue on my bedroom wall this week but I'm not going with that color but I think on a dresser it looks great! Can't wait to see the rest of the room!

The dresser looks great! I used Benjamin Moore Newburyport Blue in my son's room. It's such a nice shade of navy blue!

This is adorable! I wish I had an awesome person to make me a dresser like this when I was little (:

Well! That is about a million times better. Can't wait to see the whole room :-)

Sweet and simple. Hope he loves it!

How adorable Judy! So perfect for a little guy's room and I'm sure they will love it. Can't wait to see more of what you do! :-)
Vanessa

Adorable! Love the number stencils! Love the color, too! Can't wait to see the rest of the room. Thanks for sharing.

Love it! This dresser would look so cute in my boys room! lol

Love the color. Perfect for a little boy's room!

*Stopping by from Alphabe-Thursday! :)

So, so appealing. I just love the look of it!

Great job! I have two of those dressers and what fun to paint them...thanks for the inspiration.

That's a great project, Judy! Love the colors you chose. The stencil is great and as he gets older will reinforce the words and numbers. I am still working with my daughter on the granddaughter's room. We have to tackle a wallpaper border that is resistant to removal! I think we need to just go at it one day next week until it is off! I've got some fabric softener and a roller so I'm ready to go. : )

Totally adorable! I love seeing other people's creativity shine through.

That's a wonderful dresser for a boy! Great idea to add the stencils.

I think you Rock Judy. Loving that blue!

Great job! I like the blue and red combo. And that it helps teach him to count to 3! :)

(Came over from Christina's Adventures)

Great idea! Can't wait to see their rooms revealed when you're finished!

Wow, the colors really pop! So much fun seeing what people do with Ikea items! Janell

That's so adorable and creative!

Great ideas.
Thanks for sharing this nice and informative article..Keep update your post.you should good read more about this.
Your lovely collection of photos makes every set of ids bedslook stylish and chic.

Oh my gosh - we have that same dresser sitting in a closet! You really did wonders with yours and totally motivated me!
Have a nice weekend!
-Shelley

I love this idea. The color is great and what a wonderful idea for a child's dresser. Very cute.

What a perfect idea!

How lucky they are to have you as their decorator! Everything you do is so amazing!

Thanks for sharing your talents! I only wish I could execture the ideas!

I love this idea. I have the same dresser and was hoping to paint it. Are you finding the paint is sticking well or would a primer be necessary?