I went to the Ethan Allen sale last week.  I had gone looking for a three drawer from their Maison collection.  Unfortunately they didn't have it.  What they did have was this beauty: 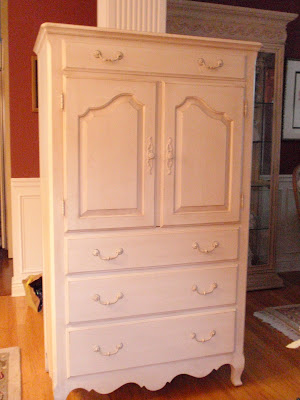 This is my daughter's room before: 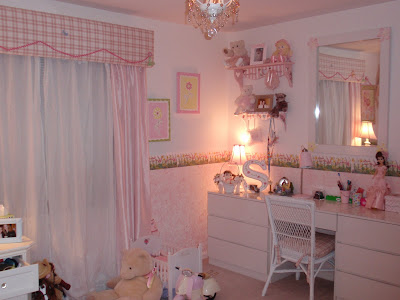 I had sponge painted the walls over ten years ago and had the picket fence border.  The border was not wallpaper.  It was a product that you held against the wall and put a damp sponge on.  It was kind of like the temporary tattoos you put on your kids.  It looked just like it was hand painted.  I had kept the packaging so that when the day came for me to change it I would know how.  It said simply to paint over it when you were ready to redecorate. 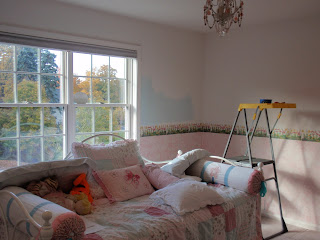 So bright and early yesterday morning I emptied the room of everything except for the bed which I left in the center of the room...so it wasn't in my way. 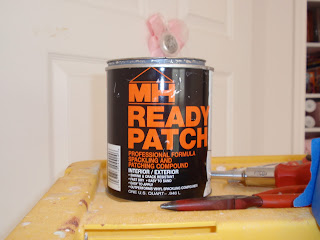 I patched the many holes in the walls left from the picture hangers, drapery rods etc.  I then sanded and thought I was good to go. 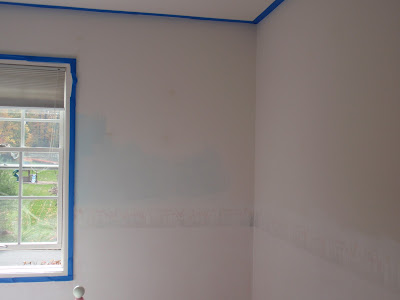 At this point, frustrated and tired,  I moved on to the accent wall.  I painted the accent wall Restoration Hardware Petal Pink (which I had left over from my daughter's bathroom).   The pink paint covered the border in one coat (I guess since it is pink??).  For this feature wall, I decided I wanted it to be stenciled.  The overall plan for the room is shabby chic/romantic/country french all rolled together. 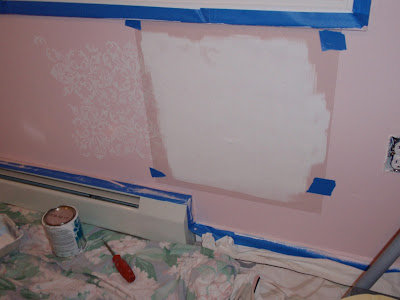 I started by centering the stencil in the center of the wall and worked my way to the right first. 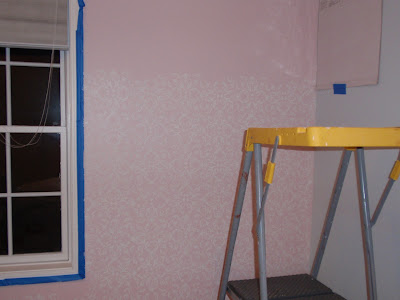 I continued in the same way working my way to the right and then to the left.  With a stencil you are supposed to line up the dots each time.  Not so easy as the stencil gets more and more filled with paint.  This was my first time stenciling such a large area.

I worked until 10:30 last night (I had begun work on the room at 8am).  The feature wall came out beautiful (it took four hours) - I will show it to you when all four walls are complete.  The other three walls I need to deal with this morning.  I will be calling my local paint store to find out what I can do to cover this border.  Otherwise I will need to come up with a plan B.   I can't wait to show you the finished room.

Let me know what you think so far...and if you have any suggestions as to how to cover the painted border when 6 coats of primer and 6 coats of paint hasn't worked so far.

Looks great so far! Wonder about sanding it down? Hope you get the answer:)

That is a lot of painting. You have great stamina. Did you try Kilz primer. I have found that it works on almost anything. The stencil wall looks wonderful. The armoire is stunning, such a great find. Hugs, Marty

Hi Judy! WOW! That was a lot of painting! I know it is all going to turn out beautifully though and that Ethan Allen find was gorgeous! Can't wait to see the finished result! :-)
Vanessa

Wow!!!! Judy, my goodness!!! I cannot believe you stenciled that entire wall! It is just beautiful~ you did an Incredible job! I have stenciled before, but never a huge amount, just a border or something along those lines. I know it is a lot of work. Thanks again for joining my party this weekend!! :)

I love love the stenciled wall! Some things that beautiful are just worth all the hard work in the end! The chandelier is also one of my favorite parts of this room. I would have a chandelier in every room if my husband would let me!! Thank you for the nice comment you left on my daughters room redo!

I love it!!! Thanks for checking out my blog. And thanks for the invite to see your. You have some amazing projects :)

Love love love this! Can you tell me where you bought the stencil?

CC - The stencil was purchased at AC Moore. I'm glad you love it...me too.
-Judy