Boys rooms are fun to decorate.  But as we all know, kids grow up...really fast.  When decorating any child's room, I think it is important to realize that no matter how much you may think the room won't need updating...the room will need updating.  What was appropriate for your child at three, won't be the same when they are seven and ten.  When we moved into our home, my son was only 2 1/2 years old.  He is 13 now, so his room has gone through several transformations.  He was still in a crib when we moved in.  He was very into Winnie the Pooh at the time.  My brother painted a mural over his crib of a Winnie the Pooh scene.  When he was 7, Winnie the Pooh was no longer his thing, but I couldn't paint over the mural just yet.  He was now into baseball and a Yankee fan.  I updated the mural by painting on a NY banner on the tree and gave Tigger and Christopher Robin Yankee hats.  We bought him a twin bed from Ikea which I painted navy blue.  We took two baseballs and drilled a hole in the bottom of each.  We then drilled a hole on each of the posts of the bed and screwed a screw in halfway.  We then cut off the head of the screw and screwed it into the baseball. 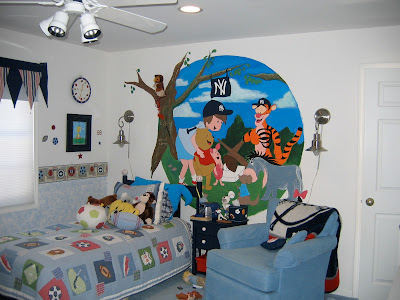 I also bought an unfinished nightstand from AC Moore and painted it the same navy blue as the bed.  I added baseball knobs on it and that was his nightstand.  I swapped out the Pooh border for a sports border from Bombay Kids. 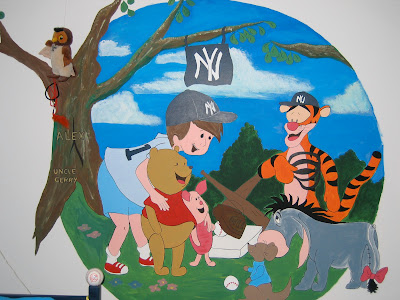 When he was ten, it was time to say goodbye to Pooh all together.  It wasn't easy getting rid of the mural...and I don't just mean emotionally.  It took 4 or 5 coats of primer to not see it bleeding through.  I made the mistake of using a Sharpie pen to outline all of the characters.  That was the toughest to cover. 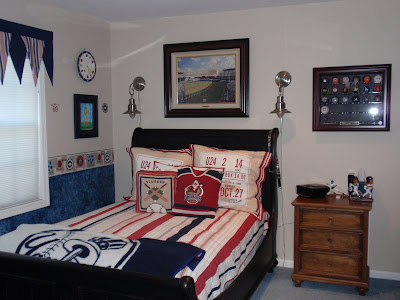 In order to get rid of the "little kid" feel to the room, the powder blue needed to go.  I took the left over paint from the bed that we had painted a few years before and I wiped it over the powder blue.  I used an old t-shirt ripped up as well as a wet sea sponge.  I wanted it to look more like denim.  The picture above his bed is a Thomas Kincade of Yankee Stadium.  That was his birthday present this year when he turned 13. 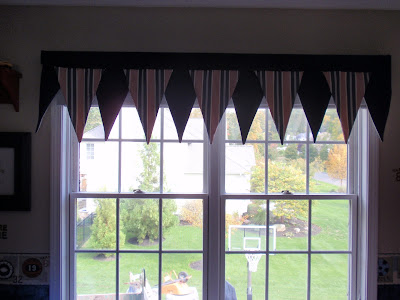 The window treatment was made during the first transformation.  With a sports theme, I wanted something that looked like pennants.  I used a brown paper bag and cut out triangles in the size and shape of a pennant.  I did some math to figure out how many I wanted across with a little overlap.  I used a solid navy and a stripe.  I cut out two triangles for every point.  With right sides together I sewed the "V" shape leaving the top open so that I could turn it to the right side.  I then measured the length of the continental rod which was already hanging (a pooh valance was hanging prior).  I cut enough of the solid navy to make a sleeve to fit the rod.  I sewed the triangles to one side of the sleeve before attaching the two sides.  I then slid it on.  Simple... and it is not too age specific so it made it to the latest version of his room. 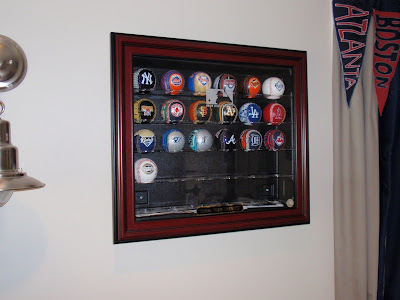 Finally...artwork.  In my opinion, every child's room should be a reflection of who they are...albeit that who they are will change with time.  Artwork should reflect their current interests and make their room unique to them.  My husband is taking my son to every major league baseball stadium (there are 30 in total) by the time he leaves for college.  They started several years ago, and currently he has visited 18 stadiums (the extra ball is from the Inaugural season of the new Yankee Stadium...just a place holder for the next ball).  They collect a ball from each stadium and display them in this case in his room.  This is something completely unique to my son and is a physical reminder of memories being made.  You could do something similar with whatever your child's interests are.  I can't tell you how happy it makes my son to look at that case and plan his next stadium visit.

I'd love to see some of your boy's rooms.  Please send them to me and I will post them.

Wow. This boys room is the best I have ever seen. I see big things ahead of you and your blog!

When he was ten, it was time to say goodbye to Pooh all together. It wasn't easy getting rid of the mural...and I don't just mean emotionally. It took 4 or 5 coats of primer to not see it bleeding through. I made the mistake of using a Sharpie pen to outline all of the characters. That was the toughest to cover. lawn dress design 2016 with price , gul ahmed lawn shirts 2016 with price