I thought it was about time I gave you a look at our master bathroom.  When we recently re-decorated our master bedroom (you can check it out here), I tweaked the master bath as well by getting rid of the purple accessories and changing it out to the color scheme to the same robin's egg blue, cream and brown we had brought into the bedroom. 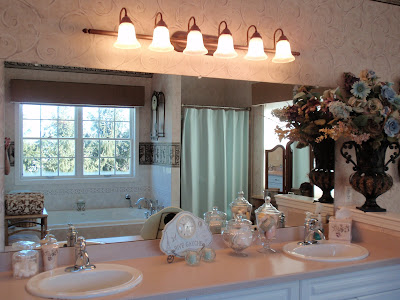 Thankfully I had chosen a neutral wallpaper as well as neutral tiles.  It's good when you keep the most difficult things to change neutral.  That way you only have to change the accents to get a whole new look.  I love many things about my master bath.  For one...it's huge 11' x 13'.  When we built the house we asked the builder to vault the ceiling so the bathroom appears even larger than it already is. 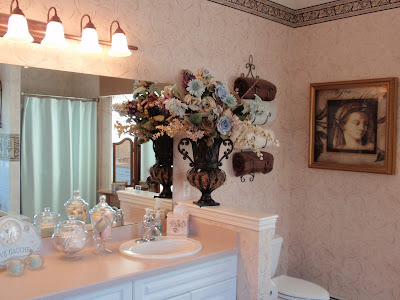 That large expanse of mirror needs a frame.  I have gone back and forth between framing this mirror or getting rid of the mirror entirely and getting two smaller mirrors instead (like this picture from Pottery Barn below).  I'm still on the fence and because I can't seem to make a decision, nothing has happened.  It's on my "to-do" list.

Ok back to my bathroom.  Both the urn and the towel holder are from a home decorating party I hosted when we first moved into our home.  I don't remember the name of the company but I remember they had really different things in their catalog (way before Home Goods existed).  The artwork is from a local store that is now out of business (it was expensive at the time but I had been searching for a neo-classic look and this was perfect). A story about this picture -  one 4th of July my husband and I were watching TV in bed and all of a sudden heard this terrible crash in the bathroom.  Apparently our neighbors were throwing a big party and setting off fireworks, one of which hit our home and knocked this artwork off the wall.  Thankfully the frame wasn't damaged but the glass shattered all over and we actually had to replace the toilet seat which took the brunt of the damage. 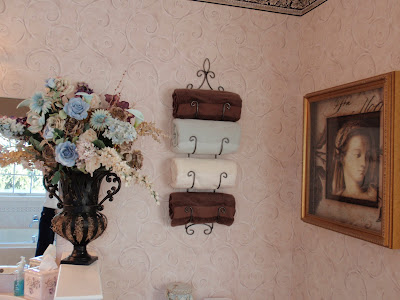 Here is a close up of the urn.  I did the flower arranging and again, when I changed out the color scheme from purple to robin's egg blue, cream and brown, so changed the flowers.  I needed height as well as distracting from the fact that the toilet is behind that knee-wall. 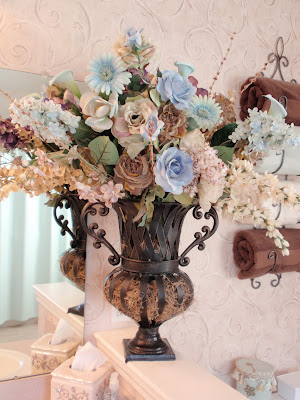 I love my vanity table and mirror.  I bought it at Fortunoff shortly after we moved in.  I usually end up standing in front of it when I put on my makeup because I'm always in a rush.  It keeps all my makeup organized.  I would LOVE to add a chandelier over my vanity table.  The problem is the vaulted ceiling...there doesn't appear to be access to the attic in order to install the box.  I will figure out a way. 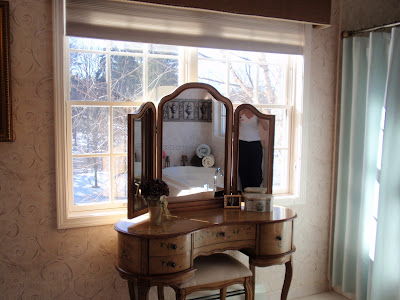 So what do you do when you don't like the way your shower doors look? 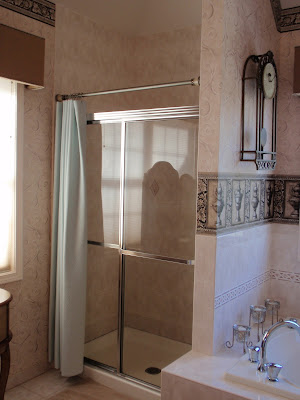 You add a shower curtain to bring out more of your favorite Robin's Egg blue.
For such a huge bathroom, the builder really skimped on the shower.  The shower is on the small side (not tiny but not huge either) with a basic door.  We thought about doing a frameless pull out door but there's really no room to pull the door out (too closet to the wall and the deck around the tub).  To just change it to a frameless sliding door doesn't seem worth the expense (it's actually close to $1000 - not enough bang for my buck on that one).  If we knew then what we know now, we would have changed the layout of this bathroom to have a better use of the space.  We just followed whatever the architect had drawn without changing anything except the height of the ceiling (our townhouse bathroom had a vaulted ceiling in the master bathroom which we loved which is why we did it here). 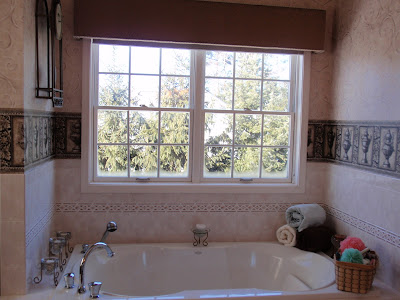 The tub area is large.  I made both valances in the bathroom.  The valances are MDF wrapped with batting and bronze silk fabric.  It is trimmed with a rope trim in the robin's egg blue, cream and brown. 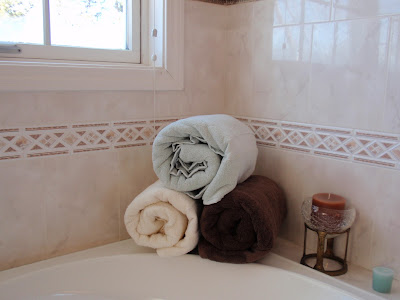 I like to roll towels in a bathroom.  It gives than spa-like look and feel to the space.  I also love candles. 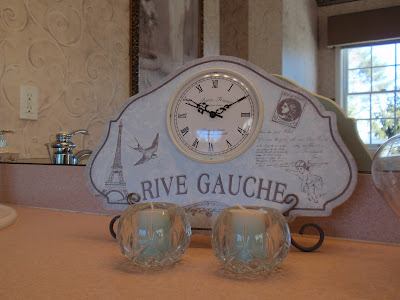 I found this clock at Michaels on clearance.  It was the perfect colors and look for the bathroom. 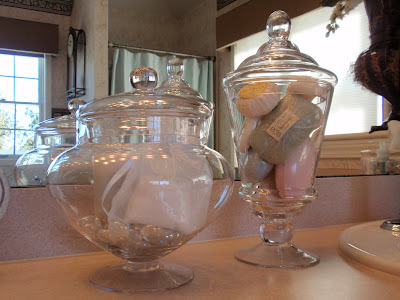 I have a thing for glass jars filled with soaps and bath salts and other "stuff" on a bathroom vanity.  These are a recent addition I picked up at Home Goods for a great deal (they were $12.99 and $14.99 respectively but I had a gift card so I didn't cost me a thing). 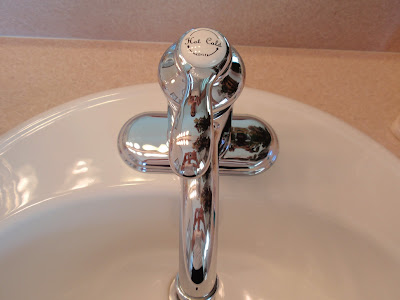 I like the look of the faucet with the hot/cold on it. 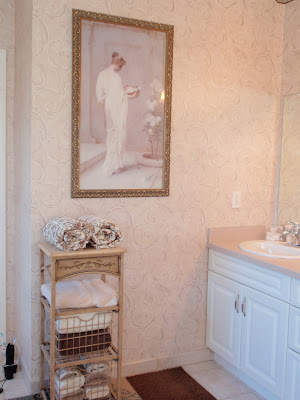 The art is from Bed and Bath. 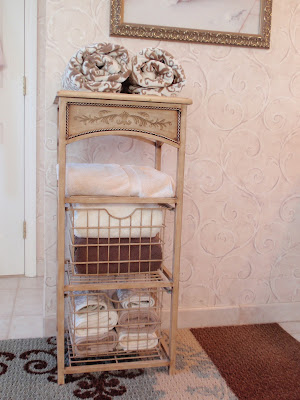 The tower is from Fortunoff. 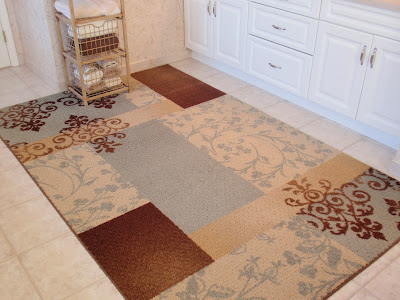 The rug is from Target and pulled together all of the new colors for the bathroom.

Let me know what you think about this space.  I always love and appreciate your comments. 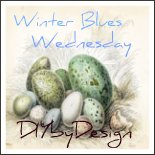 Don't forget the Winter Blues party is still going on.  Click here to join in the fun.  The link will be open through Friday. 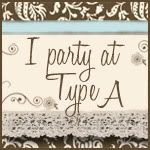 I love your vanity. Wonderful room!

I love what you've done. We're headed for a bathroom re-do one of these days. The bathtub will stay - it's a treat! The shower needs to be replaced and we'll install a bigger one. Like you, I have a large, unframed mirror in the bathroom. I don't want to lose the wonderful reflected light, so will probably just frame it with molding.

It's beautiful Judy! I'm like you in that I like my master bathroom to be more neutral, calm and serene with just hints of color here and there. My favorite part is that gorgeous vanity table and chair! :-)
Vanessa

Very nice! Love that vanity. We moved into this house last Spring and I am itching to makeover the master bath. There is plenty of room in there but for some reason the people who built the house decided not to put a tub in it and I am a big bath person! A claw foot tub is at the top of my wish list.
Thanks for sharing. :)

Such a lovely bathroom! I am in need of a master bath redo! LOL

Love the look of your bathroom and how wonderful to have so much space. Your decor is gorgeous. Hugs, Marty

Rod has agreed to a master bath remodel, and I can hardly wait! We both want a bigger shower. Ours was designed for skinny people!

Such an inviting bathroom. And I LOVE the colors.

Very pretty and I love the rug to compliment it all!

looks great, love the colors, my party is still going on if you want to share this.
http://typeadecorating.blogspot.com/2011/02/anything-goes-party-4.html

How lucky to have such a huge bathroom. I love what you've done with it.

Allison {A Glimpse Inside} said...

Looks beautiful! I love the brown and blue combination. Thanks for linking up!

What a gorgeous room.

I am your newest follower!!! Gorgeous bathroom. Can't wait to poke around here!!!

I love that faucet! I've been looking at a million faucets lately! Great job!

creative.
thanks for sharing.
:)

Hi there, Thanks so much for stopping by my blog. I can't wait to share some great ideas with you. Also, I just love your book ends that you made for your Daughter. Too cute!! Johnnie

Beautiful Room! The colors are so soothing and spa-like. Love the Left Bank Clock and how you've displayed your utilitarian stuff in such a pretty way! Thanks for sharing.

Hello again, I just liked you on your Facebook. Hope you will do the same for me. I also forgot to tell you earlier that I love the colors in your bathroom and I adore your vanity. Very pretty! My next project is revamping my master bath and bedroom. Thanks for the inspiration. See you soon!! Johnnie

Hi, thanks so much for stopping by my blog and for your lovely comment. Im in awe of your bathroom!! Its huge and so well decorated - you wouldnt be able to get me out of there :o) Scarlett x

Very pretty--looks like a relaxing spa! Thanks for linking up to Beyond The Picking Fence.

What a delicious color scheme.

I really enjoyed this tranquil little stop on our journey through Alphabe-Thursday's letter "S".

You are really a superb decorator.

Thank you for linking.

You have a lovely big bathroom! I like your choice of colours. They are gentle and relaxing; just how a bathroom should be!

I mentioned this post on my blog today! http://mallicious.blogspot.com/2011/02/new-faucets.html
Hope you have a great day!

Frameless shower doors are really popular in contemporary bathrooms, with their sleek, modern look. The shower door hardware can be mounted straight onto the glass, for a smart and tidy finish.

Seeing your bathroom has made me much happier about the colors I have chosen for my new house. I have gone back and forth about changing. Your bathroom is gorgeous!!!