We just got back from a ten day Disney Mediterranean cruise.  Words really can't do the trip justice.  It was absolutely amazing. 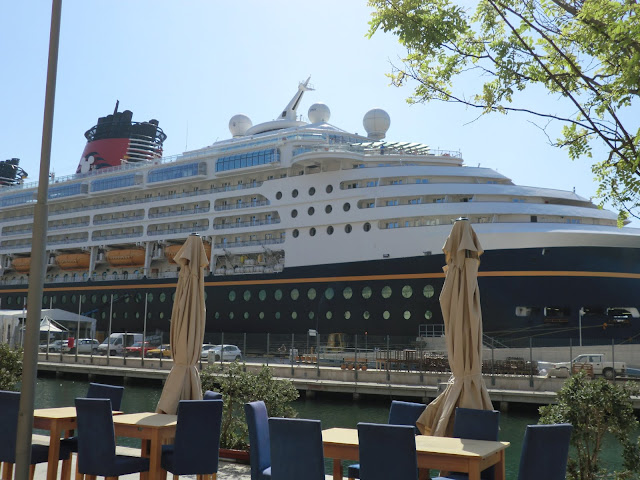 We left New York on Tuesday June 28th and took an overnight flight to Barcelona.  I had some concerns about my kids sleeping on the flight, but both of them were like pro travelers and slept the entire time.  My husband can fall asleep anywhere... and as for me...well I slept the entire flight, thanks to an eye mask, ear plugs and an Ambien.
Let me tell you…that is the key to reducing jet lag…sleeping on the flight helped tremendously.  We landed in Barcelona at 10:30 in the morning. (4:30am New York time) 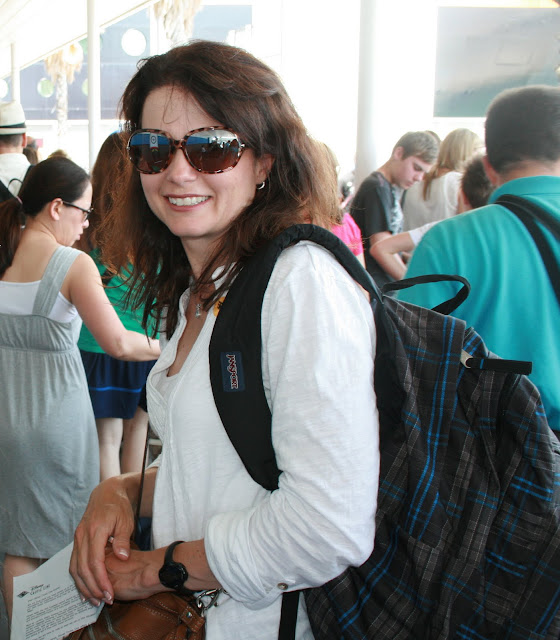 We went to baggage claim and waited for our bags. The first two bags came off the conveyor belt almost immediately.  Unfortunately, only three of our four bags arrived.  Yikes!!  I quickly opened each bag to figure out which of the bags was missing...it was my son’s bag that was missing.  Quite frankly, of all the bags to be lost, his was the best case scenario.  First of all he is very easy going and second of all I spun the situation to be very positive telling him we would be going on an adventure.  After going to the lost luggage claim area and filling out a bunch of forms, we were off to the port. 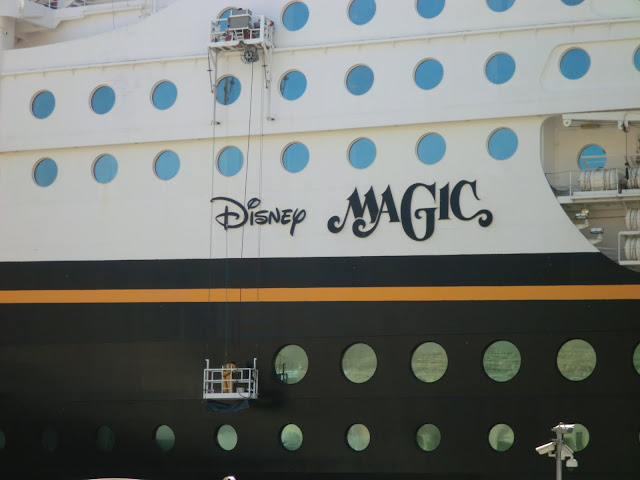 When we arrived at the port my daughter and husband boarded the ship and my son and I arranged with Disney for a bus to a Barcelona mall to buy my son some clothing (we had less than an hour to shop because the ship would be departing soon). 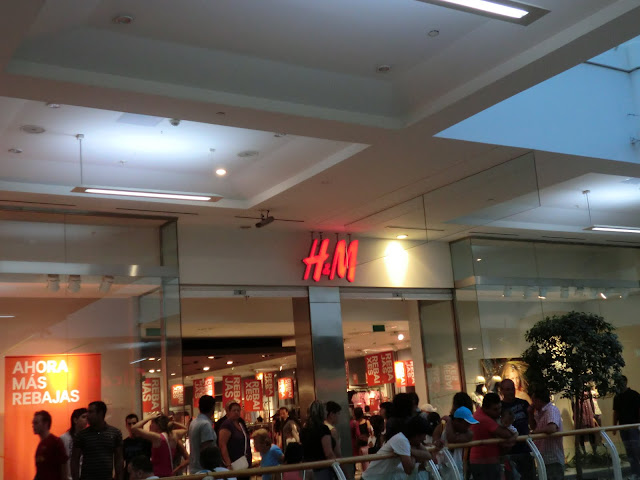 Keep in mind neither myself or my son speak any Spanish but we were able to get by with alot of hand motions and facial expressions.  Luckily we found a H&M in the mall.  I bought Alex enough new summer clothes to get him through three days (thinking that would be sufficient…spoiler to the story…the luggage did not arrive until day 9 of the cruise).  The only thing we couldn’t get at H&M was a “formal” outfit for formal night.
We went to a store called Zara and got him khacki’s and a button down oxford shirt.  With that bit of business taken care of it was time to get back to the ship and start this vacation. It's so exciting when you step on board of the Disney Magic. 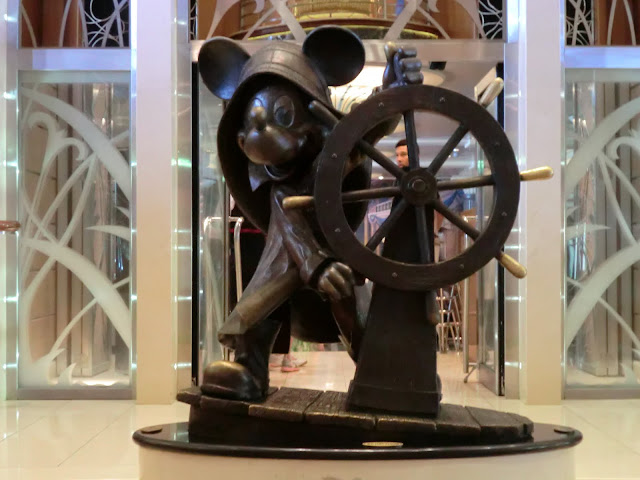 They announce your family (okay...that part was a little sad since half of our family was already on board when Alex and I arrived).   We immediately knew this was going to be an amazing cruise.  We made our way to our stateroom and to find the other half of our family.  When we got to the room I was so happy to see a cell phone (that only works on the ship).  My husband and daughter had the other one so it was so easy to find them.  Having the cell phones also made giving my kids freedom on the ship that much easier.  Everyone lasted through dinner and the show...although I did nod off a few times during the show that night.  By 9:30 pm we were in bed and no one woke up until 9:30 the next morning. 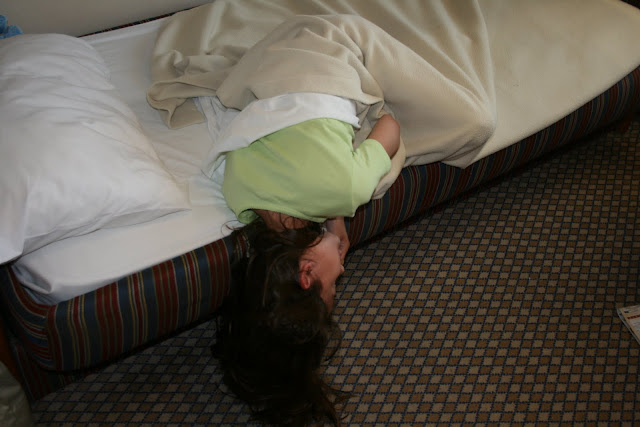 Yes...we were all exhausted.


Personally days at sea are my favorite.  I know we are there to see Europe...but it's really nice to just sit back and relax on the ship.  There are so many activities to chose from or you can just relax by one of the three pools.  My kids headed directly to the Edge club where they met so many kids and had so much fun.  The best part was they came and went from Edge at will and had more freedom than they have ever had before.  My husband and I went to relax by the adult pool.  Later that day my husband and I went to the gym to workout.  Now in real life I work-out 4-5 days a week.  On this cruise...I only saw the inside of the gym one other time (on the only other day at sea...day 10 of the cruise).  My favorite time of each day was dinner time.  There is something so special about dinners on the Disney cruise.  First of all the servers wait on you like royalty.  After the first night they know your preferences and have it ready for you (ie I like club soda, my son sprite etc).  Second, each night they greet you like family.  This became so important to us...especially after the long days in Rome and Florence when you are beyond exhausted and there's nothing better than seeing your server's smiling faces. Each night after dinner there was a show.  Three of the nights there were Broadway quality productions, another night there was a magician, another a comedian etc.  Each show was spectacular. 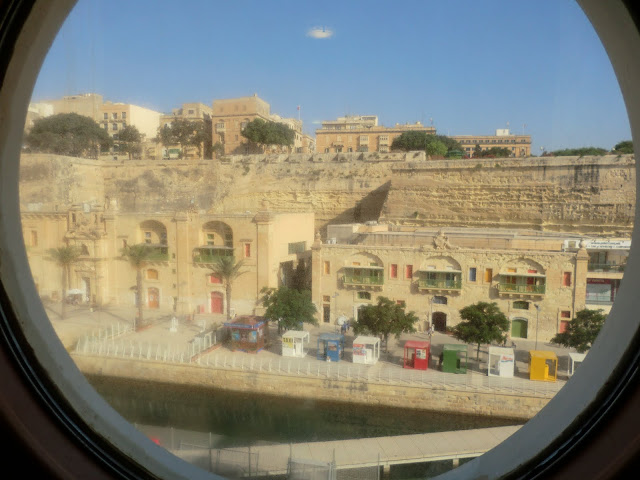 When we woke up that morning and looked out our port hole...this is what we saw. 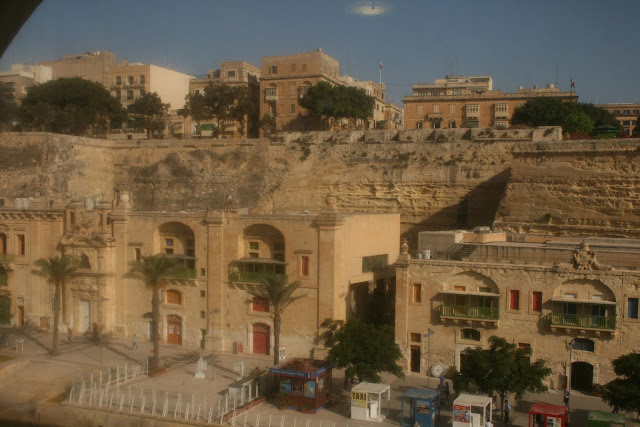 Malta is incredible...just look at the architecture.  Really beautiful.  This was a short day...easing us into what was coming.  We were able to walk from the ship into town.  Getting into town was easy.  Getting back to the ship proved to be more difficult.  We could see the ship, but couldn't seem to get to the ship.  The roads are curvy and come to dead ends. 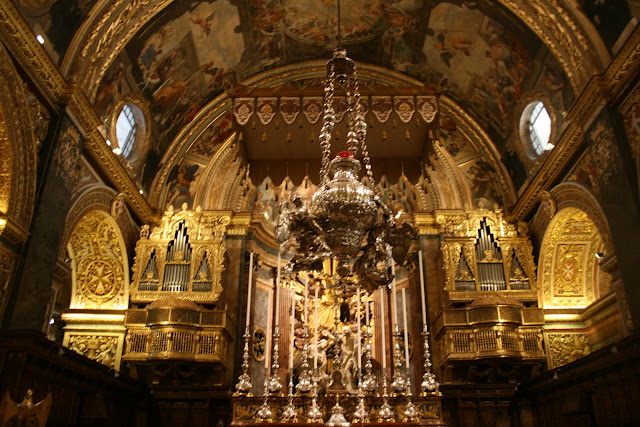 There was an incredible church in Malta (only a taste of what we would see in the other ports). 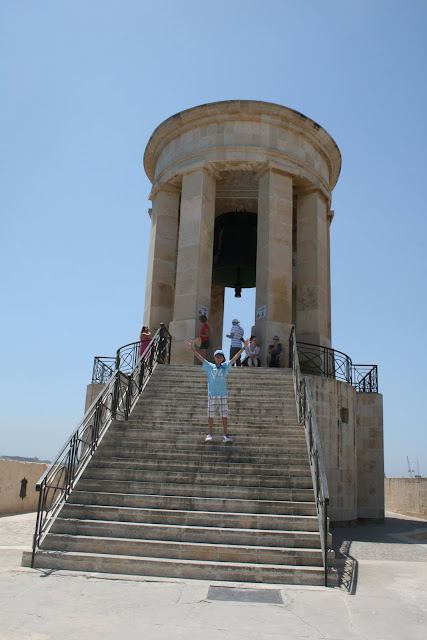 There were also these amazing bell towers all over that would ring exactly at 12:00 noon.

Palermo is equally amazing.  We were told to find the markets which were a long walk from the ship...but well worth the walk. 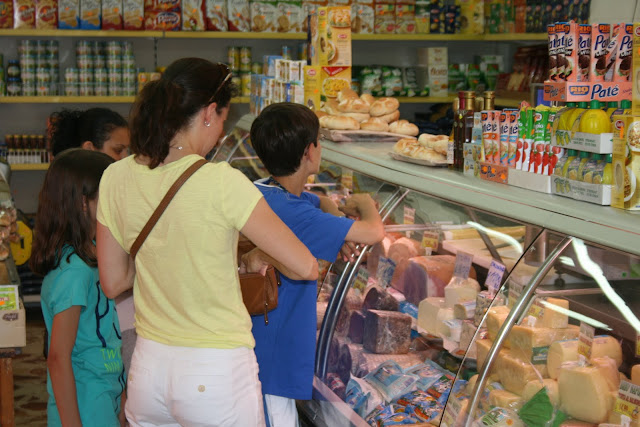 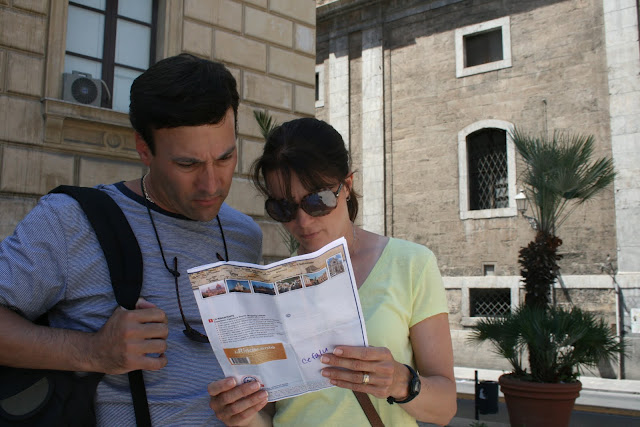 Like I said it was a long walk to the markets and once you walk through the markets you kind of lose your bearings.  This photo is very representative of my husband and I most of the day in Palermo...constantly trying to figure out the map.

Stop back tomorrow for Part 2.  Hope to see you then.

Love Disney Cruises! Looks like you had an amazing time! It stinks about your son's luggage. Hope you kept the receipts for his new clothes. The airline should reimburse you for some of it. I miss the days when you'd say goodbye to your luggage at the airport and they'd just arrive inside your cabin. Darn TSA rules. Beautiful pics! Can't wait to see the rest of your trip!

Looks like a wonderful time! What a fabulous vacation!

I've been on several cruises, but this one looks like it was above and beyond!

I'm sorry your son lost his suitcase; that is never fun. But it sounds like he handled it well, and at least you did get it back...eventually...

What an incredibly amazing adventure you all had! So fun to see your beautiful family (and you sleeping on the plane!) and can't wait for the rest of the photos. :-)
Vanessa

I am enjoying hearing about your trip...I want to do this in the next 2 years (not on Disney, though) and my husband is leary because he is not as adventurous and I am! I am hoping you also stopped in Monaco??? Looking forward to hearing about the rest of the trip! Did you take "side trips" or just venture out on your own?

We had lost luggage on a 7 day RCCL cruise 2 years ago. It wasn't even the airline. We checked in at the port in Miami and they lost the luggage between the floor and the ship!! Uggg. Unfortunately, it was my hubby's and they never retrieved it until we were back in the US. Can't tell you the impact. Oh well.....

Your pics look amazing! We leave in a little over a week for Paris. Gotta get some of that Ambien!!! lol

Wow, this is so wonderful.. looks like you guys had a fabulous time... sorry to hear about the luggage but at least he could go shopping... lol! The airline will reimburse if you give the receipts. I love the beautiful pictures of Malta and the amazing architecture of the church... heard so many history tales about Malta and now I get to see it through your lenses... Loved the last picture. Thanks for sharing. Have a great weekend!~Poppy

You lucky gal. We are going on a cruise next year. We are still on vaca, and exhausted. Your pics are fab Judy!

Wow, looks like a blast. I didn't know Disney offered such a cruise. We may have to check those out. :)

What a wonderful experience! Thank you for sharing, Judy!

we went to disney world this summer, now i'm wishing we had taken a cruise! did you use a travel agent? thanks!

this looks amazing!! I really want to go to all of these places you mentioned.