Last week the Pottery Barn Bed and Bath catalog arrived in my mailbox.  I don't know about you, but I actually get a little excited when a new PB catalog arrives.  I really enjoy flipping through the pages.  The front cover of the latest issue of the Bed and Bath catalog had new bedding featured.
When I saw the new "Charlie Paisley Duvet" I thought...hmmm...this would look really beautiful in my master bedroom.  I wanted to see it in person, because sometimes the colors appear much different from the photograph.  So I went to my local PB, which generally carries a small selection of bedding (we have a larger PB further away that carries everything, but I thought I would start with the shorter drive).  As luck would have it they had this duvet in stock.  It was even more perfect in person. 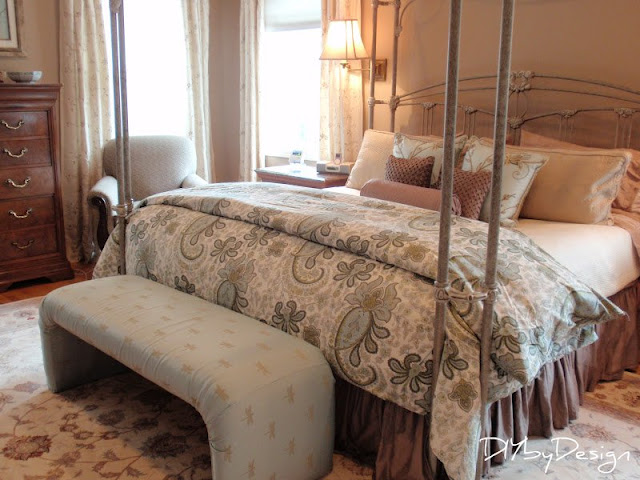 The blue in the duvet in person was more like the robin's egg blue in my bedroom, not as blue-grey as many of the PB duvets (or as blue/grey as it looked in the photo).
I was thrilled when I put it on the bed.   I think it adds so much to my master bedroom. 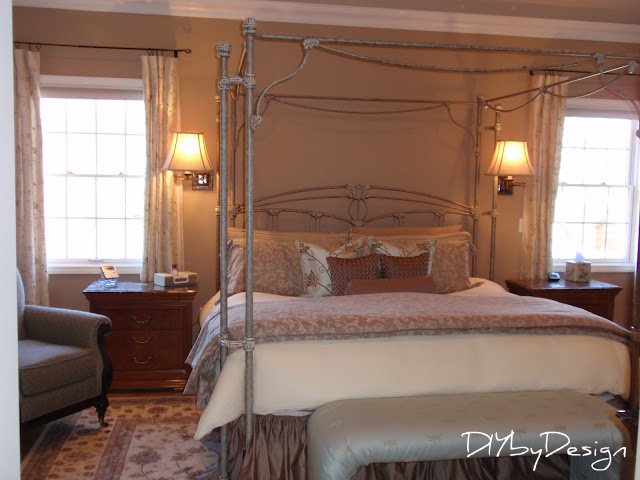 Here is my bedroom before.  We had a cream textured duvet and then the beige throw on the end of the bed.  I have been wanted to bring a bit more of the robin's egg blue into the bedroom for a while and have been keeping my eye open for something.  This new PB duvet works so well. 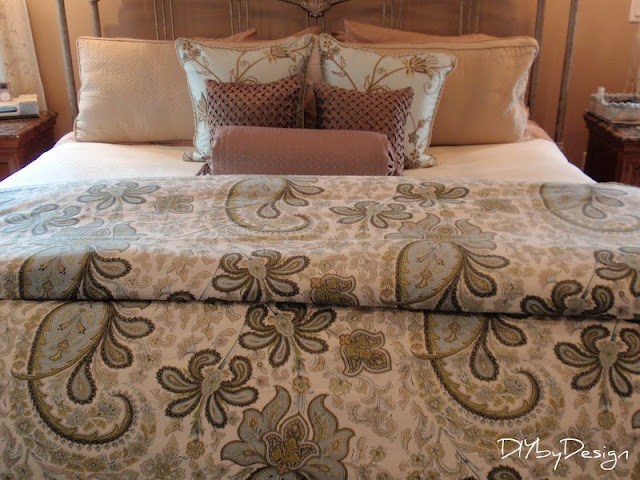 Now that I know the duvet is staying, I have to finish off the look.

Unfortunately, PB only sells standard and euro shams in this pattern.  I have two king size shams.  But I have a plan.  I noticed while at PB they sell a shower curtain in the same fabric.  I have to feel it, but my guess is that it is made from the same material.  If so, I will be sewing my own shams.
I will be sure to share how I do it if I go this route. 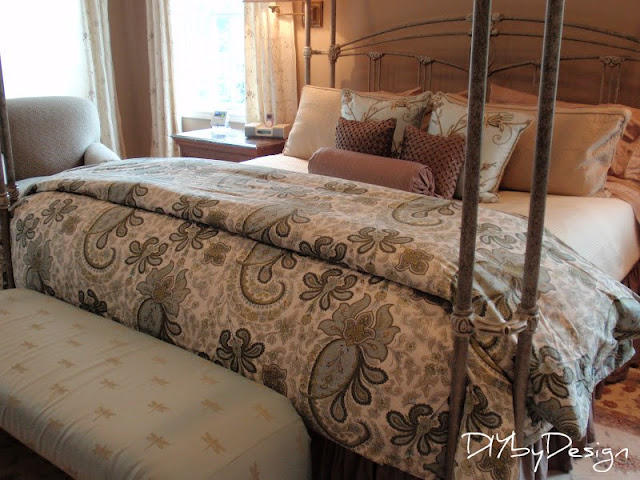 I need to bring a little more color to the head of the bed and I'm thinking the shams being placed closest to the headboard will achieve this.  Also, the cream textured duvet that we had on the bed is now being used as a coverlet.  It's a very heavy weight fabric and actually looks and feels like a coverlet.

I can't wait to hear what you think of my new duvet!
I hope to have more to share later in the week.

Very pretty, Judy! The colors are beautiful. I have to go online and see what they have got. I have a coupon that expires soon. I would have liked to have gotten a Summer set for the guest room, but by the time I get around to finding something I like, it will probably be Fall.

I just bought this very same duvet! They had it on a bed in the store, and I was a smitten kitten. Great choice! ;-)

It looks great on your bed. I like the colors in it.

I love it and you're right it does add so much to the room. I think making shams from the shower curtain fabric is an excellent idea.
I found a duvet with a matching sheet set and used the flat sheet to make 3 large euro pillows with a ruffle edge and had enough left for a bolster pillow. I saved the rest thinking I might cover my lamp shades..

I cant wait to see what you decide to do.

Can you believe I was just looking at this same duvet online last week? Thanks for the tip, I was looking for a blue-grey not a robin's egg blue.

It looks fabulous in your room!

It is stunning. I love the pattern and the colors are beautiful. It looks amazing in your room. Can't wait to see what you do with the shams. Hugs, Marty

It is gorgeous!!! I love PB bedding!The pattern is so pretty! It looks fabulous in your room!

It looks beautiful Judy and totally ties in with the bench at the foot of your bed! I love the idea of using the shower curtain to make shams!
Vanessa

That's a beautiful duvet, Judy! I, too, an redoing my bedroom. It was gold and deep red and I'm going to lighter colors with a light blue/gray as an accent. I bought a neutral colored comforter and throw pillows in bright summery colors and found some nice lamps at Kirkland's. Planning to post it soon. Still deciding on draperies.

I need to lighten up my master bedroom. It's got navy blue in it, which was dramatic and sort of soothing but is now just plain getting old.

I LOVE it! I was eyeing up that same duvet but my lampshades are too similar to it so it would never work for me! Your room looks gorgeous!
-Shelley

I love it too! You and I and Jenny have the same taste! I just purchased it for my bedroom! :)

It's really a lovely duvet. Love the colors, and that robins egg blue is one of my fav colors right now.
It make my heart happy for some reason. Your bedroom looks smashing already, so can't wait to see what else you do.
Blessings, Nellie

Judy I love it my daughter wanted the same one! Just to know, PB also sales fabric, I once needed to buy some to match some pillow covers. I don't know which would be less $$

It's beautiful Judy! I love your bedroom. I love the rug under your bed as well. We want to get hardwoods too and I thought a nice pretty rug like that would look good under the bed.

Judy...Your bed is beautiful!!...I love Pottery Barn bedding...It is in all of my bedrooms throughout the house....I recently purchased the Lewis Paisley for the master...just love the quality of their duvets...In the past, I have used a shower curtain for a valance in a bathroom window...The shower curtain matched the accessories on the vanity..Can't wait to see what you decide to do for the shams!...

It's absolutely perfect. I hope the shower curtain is the right material - you could get lots of shams from one! ;)

Pinky at Designs by Pinky said...

I love it! It looks beautiful, the colors are perfect. I am going to go to PB!!! XO, Pinky

Wow what a difference it looks lovely! We'd love to have you link it up at our "Home is Where the Heart is" Link Party!
http://www.homesteadsimple.com/home-is-where-the-heart-is-link-it-up-wednesdays-2/

Hi Judy,
That duvet really fit on our bedroom too. Wow! I love the pattern.

BTW, your BR is gorgeous. Looks like in a magazine. Outstanding job done.

This looks gorgeous! Love the patterns and the rich colors in the duvet.. can't wait to see what you create to match!
Thanks for sharing with the Pink Hippo party~
xoxo
Amie @ Pinkapotamus

Boy, is it a looker! Looks wonderful in your room. Thank you for sharing this at my Make it Pretty Monday party at The Dedicated House. Hope to see your prettiness again on Monday. Toodles, Kathryn @TheDedicatedHouse

Thank you for your duvet ideas! Mattresses will look great on bed coverings that are stylish!

Judy! I love your new duvet cover and your master bedroom looks gorgeous! Here it is a year later and I've purchased the same duvet cover for my guest bedroom. I did a google search because I wanted to see how it looks in different rooms. I like the way you brought out the browns by adding a brown bed ruffle on your bed. My room is taupe so I added whites and creams to my bed.

Love your cool project Judy. I am here again many days later. But it's true, I get healed so much after taking each tour to your elegant and innovating decor world. The master room you represented looks super beautiful and exciting. The duvet cover also eye-catching. I love each of your home project. Anyway, what is your idea about velcro bed skirt? Do you think detachable bed skirt much easier, comforter and beauty enhancer?