How to Make a King Size Pillow Sham

A few weeks ago I purchased this beautiful duvet cover from Pottery Barn. 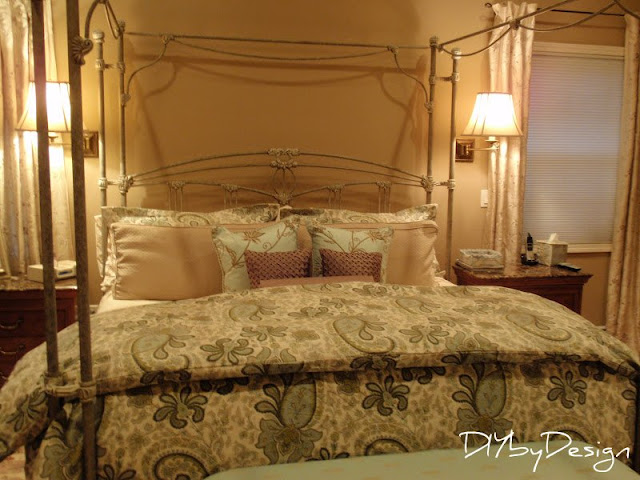 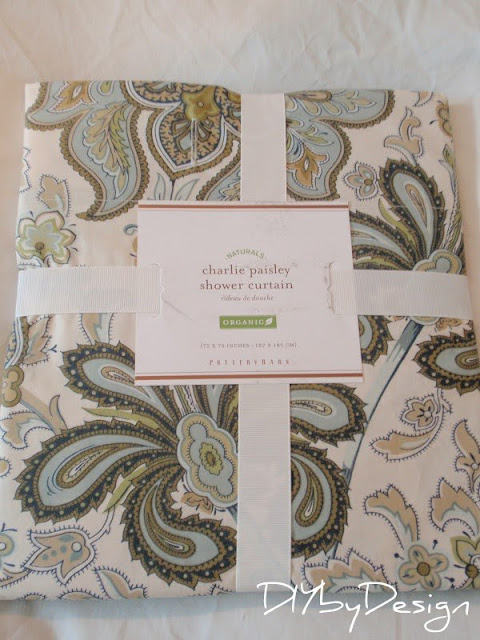 That was okay...I had a plan.  When I bought the duvet cover I remembered seeing a shower curtain in the same pattern.  I went back to the store the next day and the shower curtain was gone.  Ugh!  I called all of the Pottery Barn stores near me and none of them had the shower curtain and weren't sure when they would get them in.  So instead I checked out ebay and bought a new in package shower curtain, in the pattern I needed.  As a bonus, it actually cost me less than it would have in the store
and arrived in only a few days. 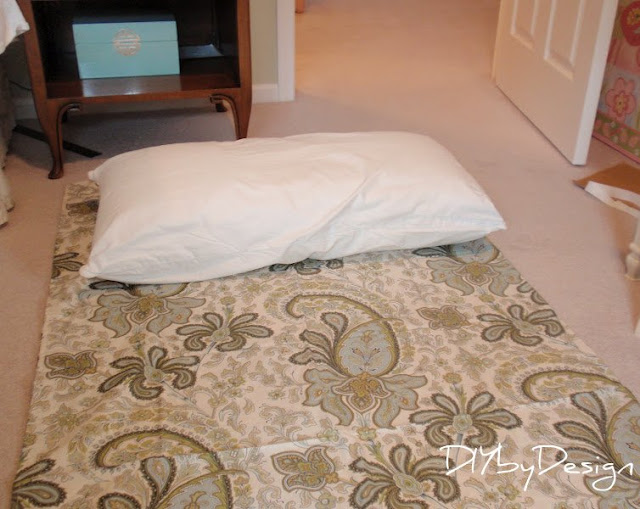 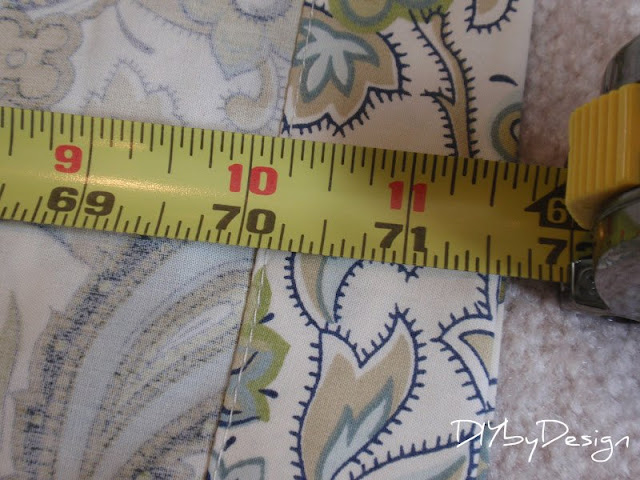 Shower curtains typically measure 72" x 72".  Because I would be cutting three widths of 24" I measured the shower curtain, just to make sure it really measured 72".  Well it didn't...so I had to adjust my 24" measurement so that all of the pieces I would cut would be equal (always measure twice, cut once).  For the back of each pillow I cut two pieces of fabric - one measuring 32" x 24" and one measuring 16" x 32".  Since I was making two shams I cut two of everything. 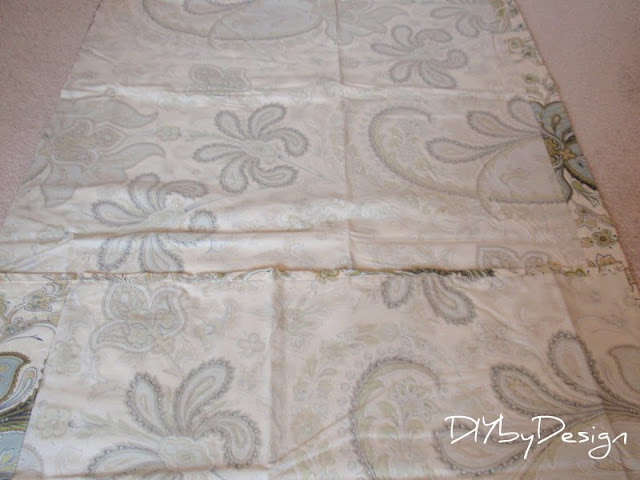 With right sides together I placed one front and the two back pieces together and then sewed around all four sides.  I was strategic in how I cut the fabric and used the hemmed edges for the back envelope section.  It saved one step in my sewing. 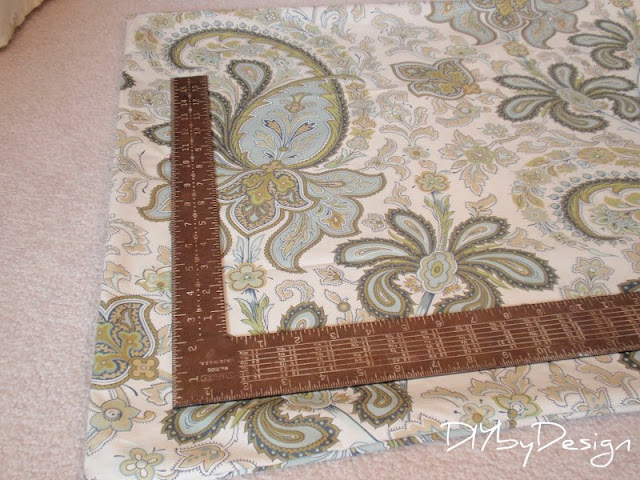 Then I turned the pillow right side out and ironed all of the edges flat.  Then I used a square and drew a light pencil line on the back side of pillow for the two inch flange all around (now my plan was to make a three inch flange, but once I had to reduce the sides because the shower curtain didn't really measure 72", the flange had to shrink a bit as well). 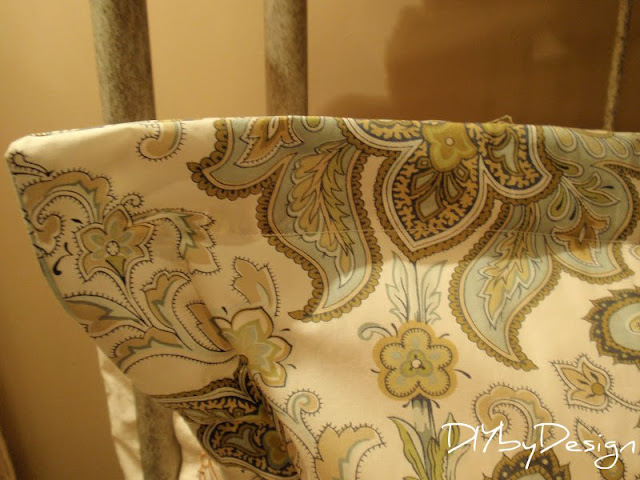 That was it...once I got all of the measurements straight, the actual sewing took no time at all. 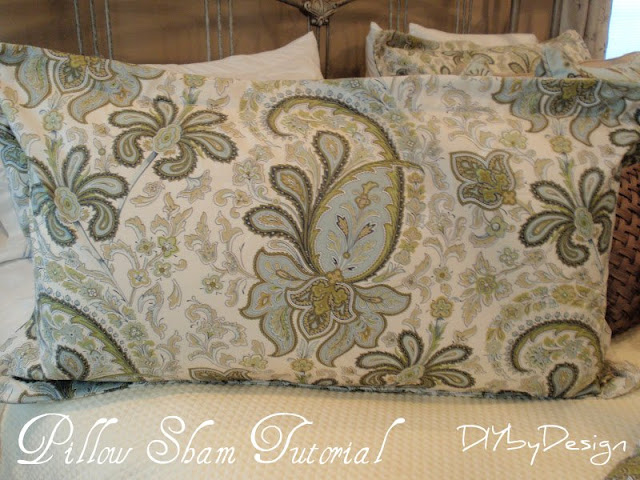 Here is the finished pillow sham. 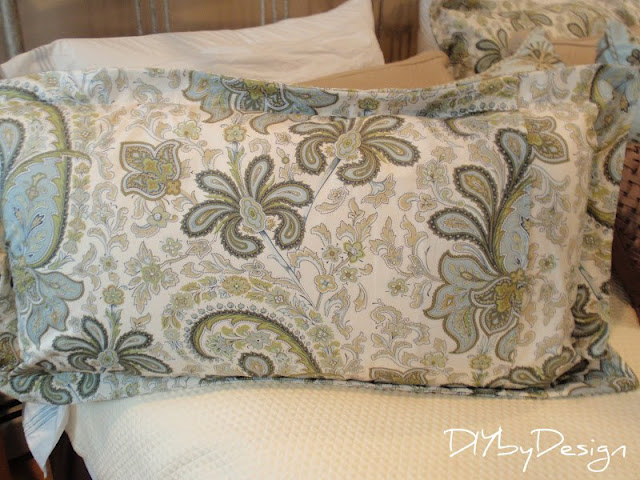 Here is the back of the pillow... 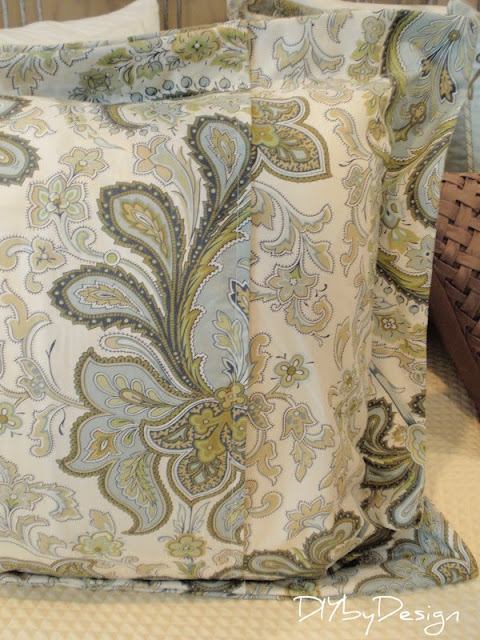 and here is a close-up of the envelope closure. 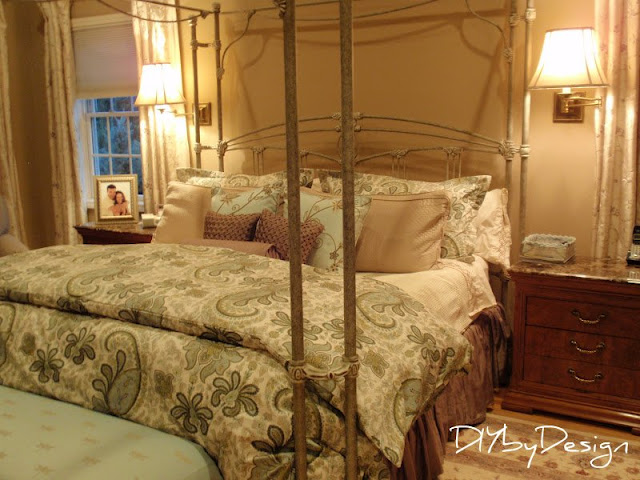 Here is how it looks in our bedroom. 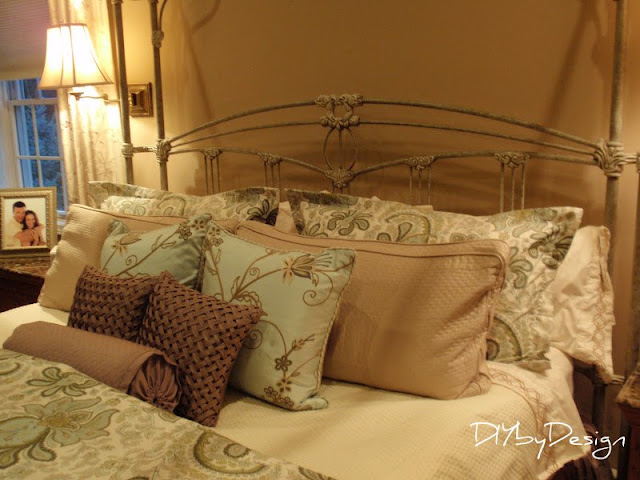 These new pillow shams complete the look of our bed. 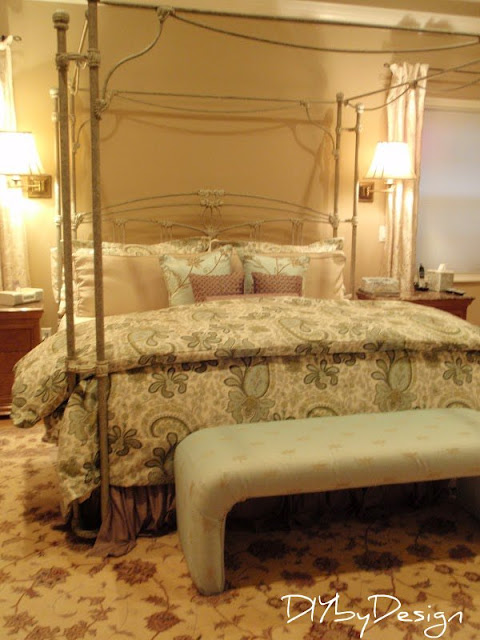 These pillow shams also cost about half of what it would have cost me to buy either the euro sham or standard sham that Pottery Barn does sell.  I have a little bit of fabric left too and I'm sure I'll figure out something to use it on.

Can't wait to hear what you think of my new pillow shams.

Partying at Freckled Laundry, My Repurposed Life
Posted by DIYbyDesign at 2:30:00 PM

thanks for the detailed instructions.
I might be able to follow them and make my own now..

That is a pretty set and great fix to to your dilemma!

Thanks for the great tutorial as well never thought of using a shower curtain for extra fabric.

Great solution, Judy! I love the way they turned out. I can't believe that they make a matching shower curtain, but not King size shams.

Hi darling, beautiful. Thanks for the tutorial and inspiration. Because of your posts my machine and I are best friends once again.
hugs ~lynne~

Judy I love that fabric!! You did a great job. I'm jealous!
XOXO,
Rachel

They do complete the look and you did a great job! Looks so pretty!
I made King size cases and bed skirt out of the left over fabric from a loveseat in our bedroom sitting area.
It pulls everything together.

Great tutorial and they as well as your bedroom are gorgeous!

I'm horrible about sewing and measurements! I think the shams turned out great! Congrats.! {:-Deb

That was the perfect solution Judy! Your new bedding looks beautiful!

LOVE the bedding. Great job on the shams. Makes me want to break out my sewing machine again! :) Would love to invite you to link up and share over at Curb Alert's! Friday Block Party. Hope to see you there! http://tamicurbalert.blogspot.com/2012/08/friday-block-party-13-come-join-us.html
Tami @ Curb Alert!

nice work. you must be very patitent

Oy! Do I love that bed? You bet! It is gorgeous. And, you have only added to its' beauty with the shams you have made. Thanks for sharing.

Love this tutorial and the finished product. I'll be pinning this for future reference. I'm driving myself batty trying to find red & black buffalo plaid. I may resort to linens & shower curtains. Great idea!!

I would never ever have thought of this. I have this exact same problem with our king size bed.

The quilt I have on it now is old, but next time I'm going to look into that.

When you do find the KS shames they are wickedly expensive too!

Another lovely solution from Miss Judy!

Thank you for sharing it.

Used your guidance to create some bright purple king size shams! posted a few pics (although not great ones of the shams) on my new blog at http://kerrybest.com/2013/03/26/i-dont-usually-sew-but-necessity-reigns-supreme/

My room is quite a bit more casual than yours (which looks awesome, by the way), but the colors make me happy, happy!
thanks for the guidance!

You did a marvelous job and kudos to you for improvising. Excellent tutorial as well. -Brenda-

P.S: I have even gone as far as taking a duvet cover and/or a comforter apart for fabric that I needed. ie: Slip cover for upholstered headboard, bedskirt, pillow shams, accent trim for drapery, roman shades etc. Similar to flat sheets, the beauty of doing so is the fabric is much wider than standard 36" to 60" wide fabric thus eliminates seaming pieces of fabric together. ☺

GREAT JOB!!!!! FYI-- next time you are ready to make a change and need additional fabric, try purchasing a "twin flat sheet". Works very well. This is what I usually do. But this is gorgeous!!

Your collection is very nice. How many bed bath linen collection you have, can you share it please.


What is Pillow Sham

Nice blog, this is what I exactly Looking for, Keep sharing more blog.
what is a euro sham

Nice blog, this is what I exactly Looking for, Keep sharing more blogs.
what is a euro sham

What a great info!! Thanks so much for sharing.
what is a pillow sham

A perfect post. It is so helpful and informative for all. Thanks so much for sharing.
what is a euro sham

This was one of the best read and experience in this wonderful DIY design world. The room looks so gorgeous and love your transformation ideas. Thanks for sharing. I also would like to learn about euro sham pillow cases. Can you please gift us a new post on it in future please?

This was a really wonderful post. Thank you for providing these details.
what is a sham?
What is a euro sham

I am late to this post by almost ten years! But your look is timeless. It's truly gorgeous. I'm going to attempt this with a queen size comforter to match my existing comforter and use the piping instead of a flange. Thanks again!