I love wallpaper, but don't always want to make the long term commitment.  A few days ago I was searching the internet for temporary wallpaper for our finished basement.  I came across a very cool site that sold such wallpaper.  It was fairly expensive costing approximately $85 a double roll.  Not wanting to spend that much, I dismissed the idea and went on with my day.  The next day I was doing a quick run-through Home Goods when I saw something out of the corner of my eye.  The sales people had filled a cart with mostly Christmas stuff that they would be putting on the shelves.  I saw these rolls of paper, that looked bigger than Christmas paper, so I went over to investigate. I couldn't believe it!  It was the very same temporary wallpaper I had spied on the internet, except Home Goods was selling it for only $19.99 a  double roll.  I bought all four rolls of a pattern I plan on using in the basement (the exact same pattern I was considering the day before).  I also bought one roll of a more neutral pattern, not knowing exactly what I was going to do with it, but liking it enough to figure something out. 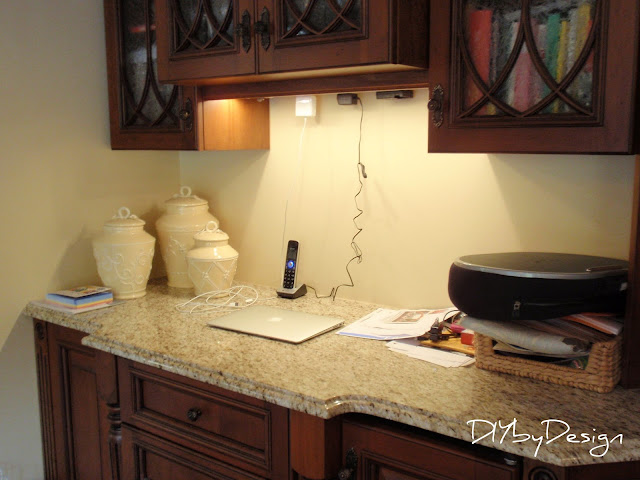 In my kitchen we have a "bar" area with a backsplash in need of a little something.  Originally I thought I would have an antique mirror installed.  But because of it's unique shape it was going to cost me thousands of dollars.  So instead it had just stayed painted for the last few years. 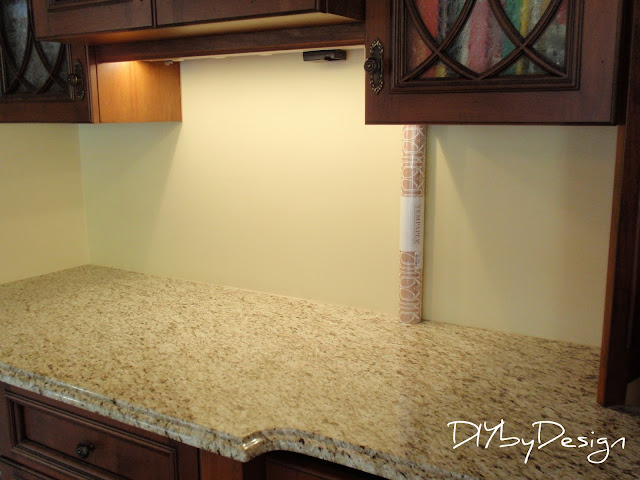 This would be where I would wallpaper.  First thing I did was go through all of the papers and junk and either throw it out, file it, or just put it where it belonged.
It was well overdo to clean up and organize this area. 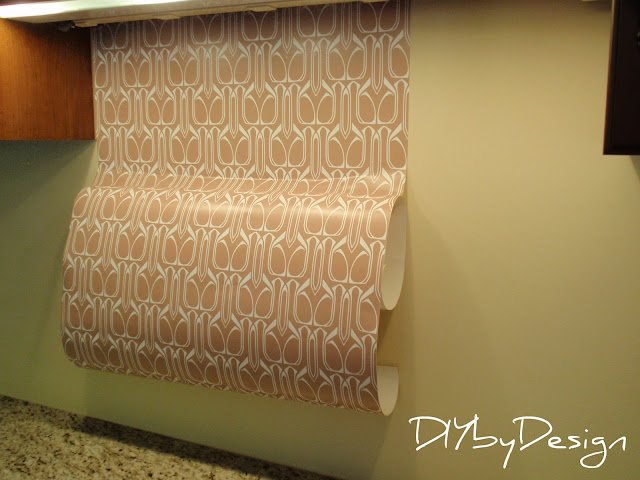 This temporary wallpaper is applied very much like contact paper.  It's a bit more stable, but other than that it's very similar.  It's easier than regular wallpaper to hang because there is absolutely no mess.  I actually hung this paper dressed in nice clothing...not my normal project/paint clothes. 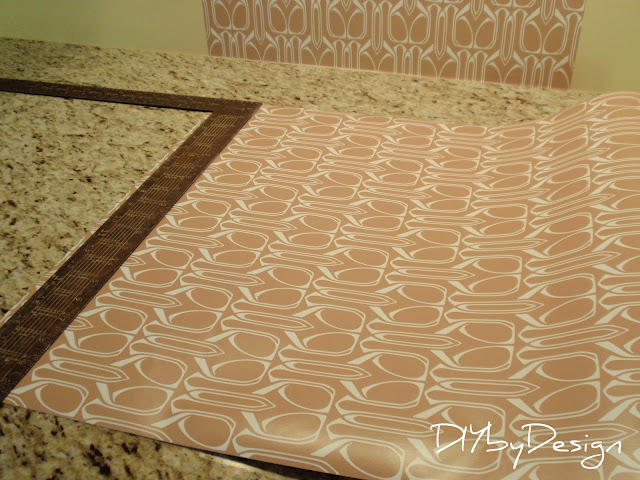 I started in the center and worked my way back to either side.
I used a square to keep all of my cuts perfectly even. 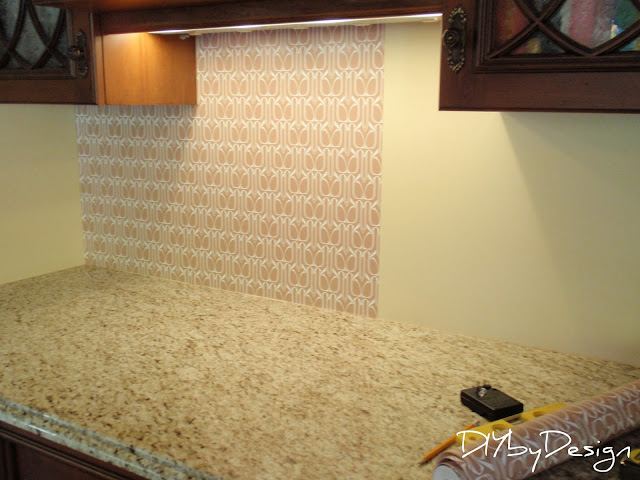 It went up super easy.  I used a level on the first piece and then just lined up each of the next pieces. 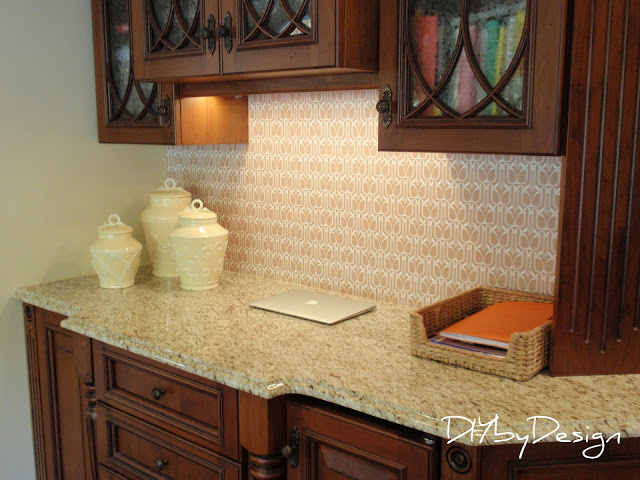 In no time at all it was done and it looked great. 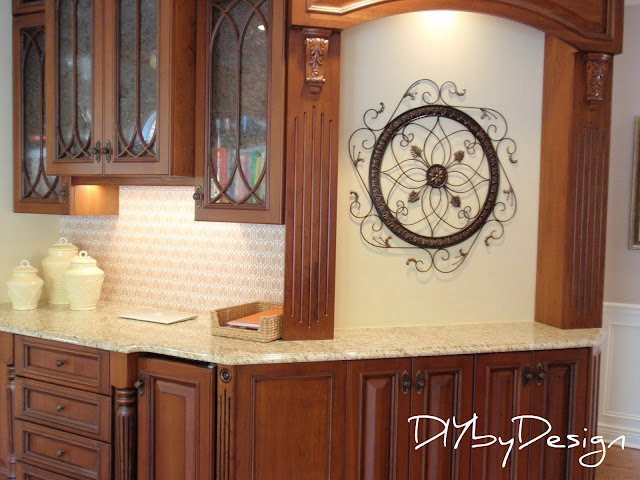 Then I took a step back and realized that now that I wallpapered the backsplash area,
I really needed to do the same on the archway wall. 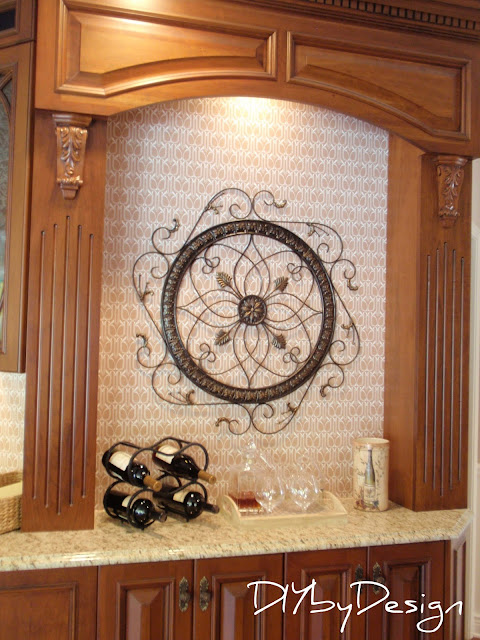 Again, in no time I got it wallpapered. 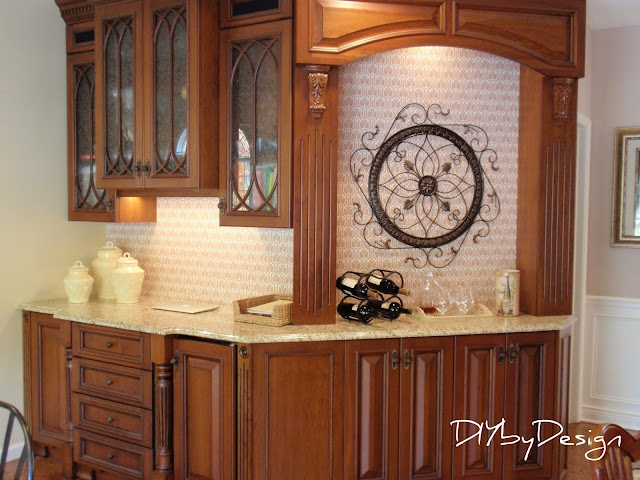 It looks so much better.  I didn't even use up an entire roll
so I'm sure I will cover something with the rest. 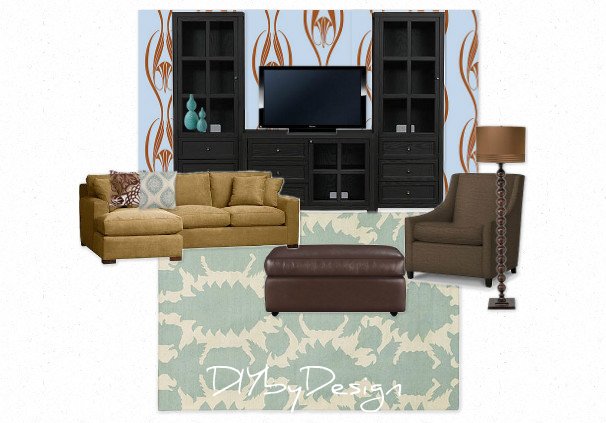 In the meantime, I have put together a quick mood board showing you the pattern of the temporary wallpaper I scored for the finished basement.  The basement is going to be undergoing some changes.  More about that later. 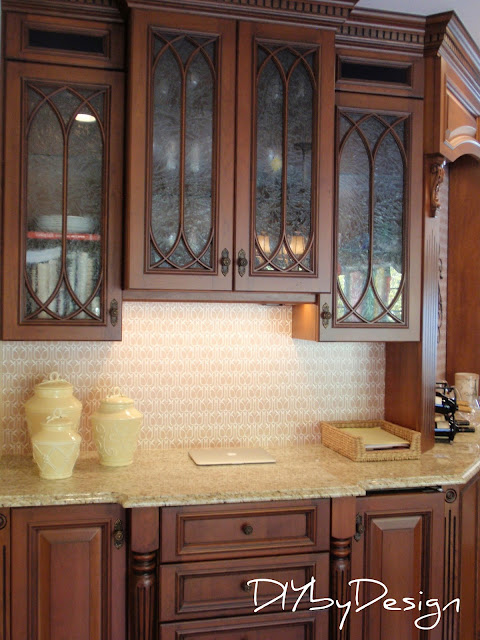 Judy I love it! It was the perfect finishing touch!

*running to Home Goods!* Hope mine has it too :-) I have also been looking for that wallpaper and just couldnt justify the cost!

The temporary wallpaper is a fantastic idea and it looks great in your kitchen. Love my Home Goods!!---- Shannon

Oh my gosh! I love it, Judy! Temporary wallpaper ~ genius. I have found that the new Home Goods here by me is not that great {not like my one in NY}, but I will look for this. Right now we don't have a backsplash and I may give this a try to add some interest in our kitchen.

Oh my goodness, it looks fabulous. I love this idea. Never heard of it, but will definitely keep my eye out for some. I love your pattern. Hugs, Marty

Judy, I really love, love the wallpaper! It is gorgeous! What a beautiful difference it made!

Wow, Judy, that looks amazing! It really added the perfect touch to the cabinets!

Wow, what a fantastic idea, and it looks awesome! Thanks so much for sharing and the inspiration. I wish we had a Home Goods store where I live. Dallas is the nearest one, but I always make a stop when I'm there. :)

The paper looks wonderful!!..It really warmed up the space with that beautiful pattern...It was just meant to be..to find that wallpaper at HomeGoods...!

Oh my goodness!! Don't you love it when that happens? It looks so incredible in there and made a huge impact. Well done friend! :-)
Vanessa

How pretty! I like the idea of temporary wallpaper, but I can't quite bring myself to pay the price. It's fantastic that you found such a good price at Home Good, and it looks stunning on the wall.

I really like this! It looks perfect where you have placed it. Thank you for sharing this at my Make it Pretty Monday party at The Dedicated House. Hope to see your prettiness again on Monday. Toodles, Kathryn @TheDedicatedHouse

I just wanted to let you know that I love the new wall paper.