Debbie-Doos is having her pet party today, so I just had to have Sara be a part of it. 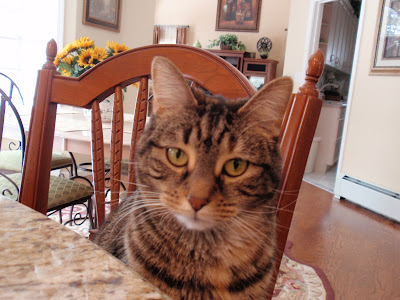 Sara is 4 1/2 years old.  Sara was not a planned addition to our family.  One Saturday in October, 2006 we were running errands.  One of our errands that day was to stop at the pet store to pick up some hamster food (we had one hamster).  We were going to stop at one pet store, but drove by a little too fast, so we ended up going to Petsmart.  We walked in and they were having a small adoption fair in one corner of the store.  My kids, then 5-1/2 and 8-1/2, wanted to know if they could go over to "look" at the kittens.  I grew up with a cat which lived to be 22 years old.  She was a grey/black Tabby cat.  For years I had told my kids about my cat growing up.  So I went to get the hamster food, and my husband and the kids went over to the kittens.  By the time I came back with the hamster food (no how long could that have possibly taken...two minutes), my  daughter was holding a kitten.  She was a stray that was found in someone's backyard.  Long story short...some pleading and begging later...next thing I know we have a new addition to our family.  It didn't hurt their cause any that she looked so much like the cat I grew up with. 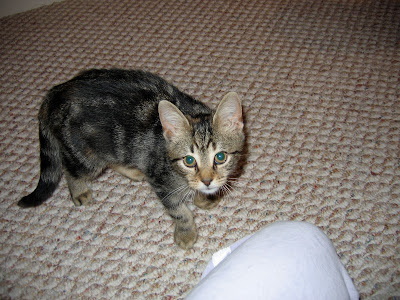 Here she is as a kitten...there was something about that cute face.  I couldn't resist.  They say pets sometimes chose you.  I really feel like that was the case with Sara.  Instantly we all felt a bond with her in the store.  She was a calm, gentle kitten who loved to be held. 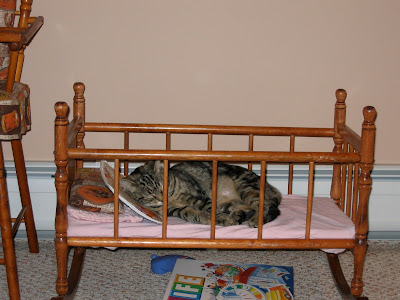 We bought Sara a really nice cat bed...she has NEVER slept in it.  Instead she has found other locations she deems more suitable.  How cute is she in this little crib (which was mine when I was little-same with the high chair to the left). 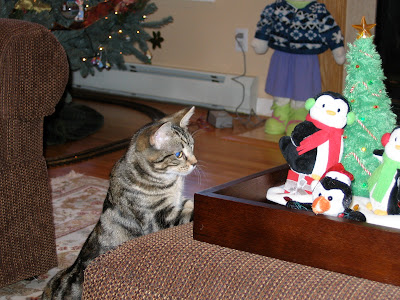 Here she is on her first Christmas.  She is such a good little cat.  She is a very calm cat.  We have always felt that she is more dog-like than cat-like.  She runs to greet anyone who enters our home.  She follows me around all day long.  She loves to be held.  She really is not shy. 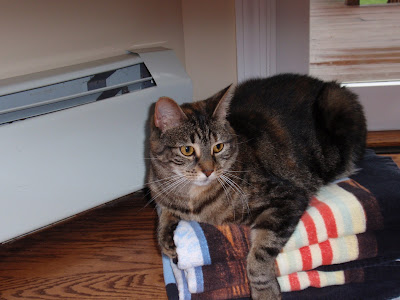 She loves to be part of the action.  Here she is on the towels that were going back out to the pool house. 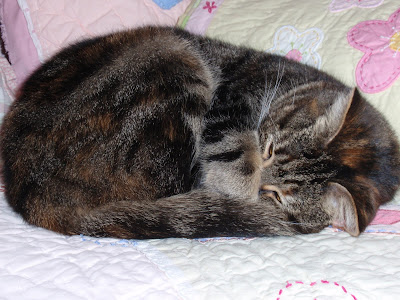 Like I said, she likes to sleep almost anywhere except for her cat bed.  Here she is asleep on my daughter's bed (one of her favorite locations).  She reminds me a little of the dog in Peter Pan.  You know how the dog looks after the children...that's Sara.  In the morning she makes her rounds checking on each child as they get ready for school. 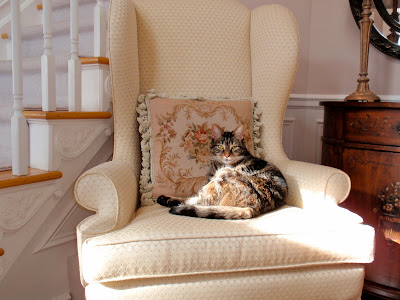 She follows the sun during the day.  You can always find her in the room that has the sun shining in.  See what I mean?  Who has it better than her? 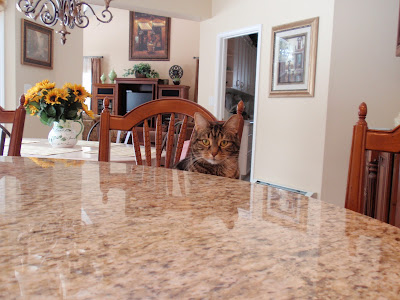 She definitely thinks she is one of the kids.  Every morning when my kids come down for breakfast, she is already sitting at the counter waiting for them.  She usually starts in the middle seat, but as soon as my son comes down, she knows to move one over to the left.  Then she just sits there during breakfast...doesn't make any attempt at the food, just wants to be with us. 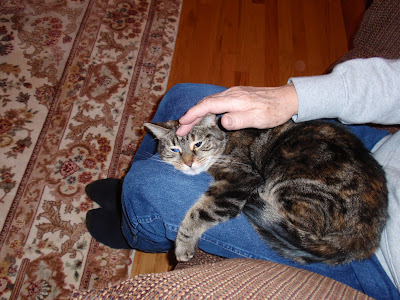 Sara turned out to be one of the best impulse decisions we have ever made.  She is the best kitty ever.

Hope you join in over at the party.  Let me know what you think of our sweet Sara.

What a cutie! I so love cats ... they are the best friends ever.

Pop over for our Valentine's Giveaway

I have two, miss kitty and marshal dillon. Both black and white.
they really do become part of the family, don't they?
gail

Wendy@Once upon a rose haven said...

Precious! She reminds me of our Rush. I definitely agree that pets choose their owners!

Very darling kitty Judy. cats are usually a darling one, playful, lovely and lovingly as yours is... sweet hugs...
Hope you would like to spare a little bit of your time for me sure you will enjoy
http://craftaworld.blogspot.com/
Love
Farah

I think sweet Sara is adorable....her in the cradle and then all curled up just made me smile. Thanks Judy for sharing her with us all. Enjoy the party.

She is cute. I have two cats and one dog. One of the cats thinks that she is a dog lol.
Have fun with her.
Greetings,
Liliane

Hi Judy! Oh, your little Sara is a beautiful kitty! I think she likes having her picture taken too! :)
Be a sweetie,
Shelia ;)

Hi Judy,
What a gorgeous little cat ,I can see she really is one of the family.I have found the tabby cats to be the most dog-like-, as you say, they follow you around and want to be part of all family things, just like a little dog- and I once talked to a vet's assistant who actually confirmed that tabbies are like this.They really have a special place in my heart. You've got a lovely cat " model" - so cute to see her in the crib and on the chair, hahaha , they can be so silly.I still have a cat- bed which I bought specifically for my cats- and will they sleep in it ? No , not at all!My cats have never slept in but my little dogs have !!.If only we could all have a life like your cat- she looks much loved and very comfortable!!

the cape on the corner said...

what a sweetie! she sounds like my cat who can sleep anywhere-under a chair, against freshly painted moulding and trim. and that pic of her in that crib is super cute!

Awww, I love Sara!! Her temperment very much reminds me of my boys.

And this is the second post I've teared up at today...what is with me! LOL It must be all these adorable babies getting to me. :)

That is so funny that you called yours a puppy cat also, I don't think there is many of those around, I can tell just by looking at her that she is a sweetie. The crib, to sweet, they always like to be up high and have a good view of everything, I think the crib fits that bill. Thanks for stopping!

Nice to meet you
Carol

Puppy cat is so cute...Love the photo of her in the doll cradle...looks like a nice warm place for her to sleep!!!

What an awesome cat! We too have a Sara who we got at Petsmart. She looks alot like yours and is the same age. Our girl loves to snuggle and is a puppy-cat too! She (along with the kitten we adopted recently) is definitely a member of the family, not just a pet!

I love cats. I have had alot of them join our family our current queen of the house is a tortoise calico named smudge. She really has been a wonderful cat. It will break my heart when she moves on...she is 14 and is a senior kitty.

Aw Judy I adore Sara! What a pretty girl and sweet personality. I love the way she checks on the kids. Too cute. I enjoyed reading about her. Thank you for warming my heart today.

Happy week to you my friend.
~Melissa :)

Thanks for joining! I hope that the Swap Followings party turns out as a positive experience for you :) I'm also a follower. Please spread the word and link up next week. Thanks.

I have a cat that looks like Sara. Her name was Alice - and she was also a stray. We call her Alice, the dog cat because she acts like a dog too. And she does the exact same thing...she herds around everyone in the house...making sure they are ok - and she also sits on the chair in the kitchen too!! Although she is definitely after food...very sweet story about Sara.

Thanks so much for stopping by LGTB! I'm so excited to be your newest follower!

oh how gorgeous! and how great of you to give her a home!! I have always had cats growing up and I dont know what I would do without them in my life.
I love that she is so good with the kids and is apart of the family. I agree that cats choose you and not the other way around.

oh my... she looks like my cat Ella that lived to 18 years old! also very quiet and sweet. and the crib should be the new cat bed, she looks adorable in it (and so confortable!)

She is too cute sleeping in that crib. Love it!

What a sweet baby! Adorable sleeping in the crib :)

So sweet! The breakfast stool thing is hilarious!

Very sweet Judy! I love the pic of her peaking over the counter, to cute! Martina

she is so sweet and seems so human like! glad you found each other.

Oh, Sara is just a beautiful cat and sounds like the most perfect one! Aren't our pets such a joy?
Be a sweetie,
Shelia ;)

Beautiful cat and i loved this story!!!

An Oasis in the Desert said...

Sara is adorable. I think when I die that I want to come back as a cat. But not a stray; I definitely want to be in a home like yours or mine.

Sara is very sweet. I love the picture of her lying on the chair in the sunshine. Smart girl!

hi Sara this is Beatrice and Cally what a great story so glad to meet you see you at the next party:)

I came directly from Debbie's party- didn't realize I've all ready invited you to the pet portrait give away!