Opening Up a Can of Worms

A few months back our cat, Sara, got very ill, with acute kidney failure. She was in the animal hospital for over a week and ultimately we were called in when things took a turn for the worse, and given the option of putting her down.  I couldn't do it and refused.   You can read here how, only through a true miracle, she made a complete recovery.  While she was in the hospital, I was searching for reasons why our healthy five year old cat would suddenly get so ill.  I decided to call in a mold specialist to test our finished basement.  Over the past year or so the basement had developed a musty smell.  We finished the basement 11 years ago and never had any issues before this. 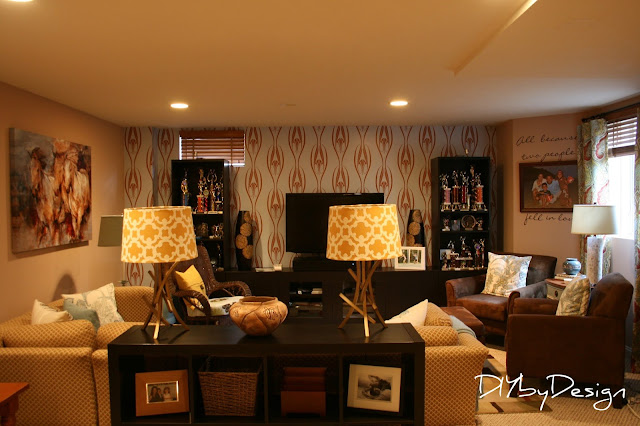 I didn't expect them to find anything, and I was doing it more to make myself feel better.  Well, imagine my surprise when they found mold growing by the window. 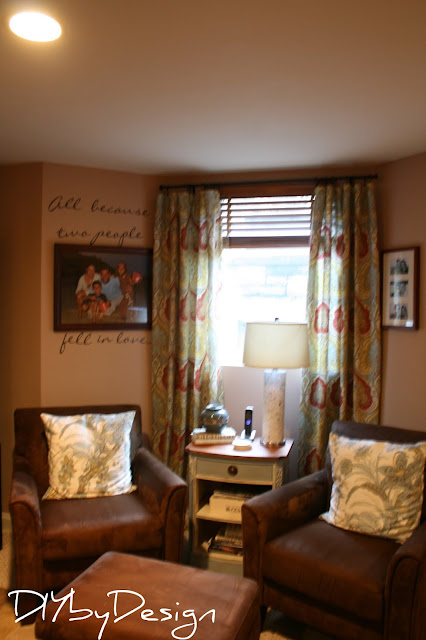 Last year during Hurricane Irene, we had water pouring in from the gutter being clogged. We pulled the rug back and did everything that was supposed to be done to dry everything out.  When the mold specialist came he found that mold had developed behind the baseboard molding.  Still, not a big deal.  The specialist told air samples but told me there was nothing to worry about and that we could probably just replace the molding and everything would be fine.  Well a week later the mold specialist called and said that the air quality levels were off the charts bad!  He suggested we do a complete remediation.  Before going forward we attempted to go through our home owners insurance.  Guess what...mold is not covered under home owners.  Just super (with tons of sarcasm).  But the home owners did bring in their own mold specialists and their tests also revealed super high levels of mold in the air, including black mold.  Ugh, this was becoming a disaster. The drapes have to be removed and sent to the dry cleaners to make sure are free from any mold. 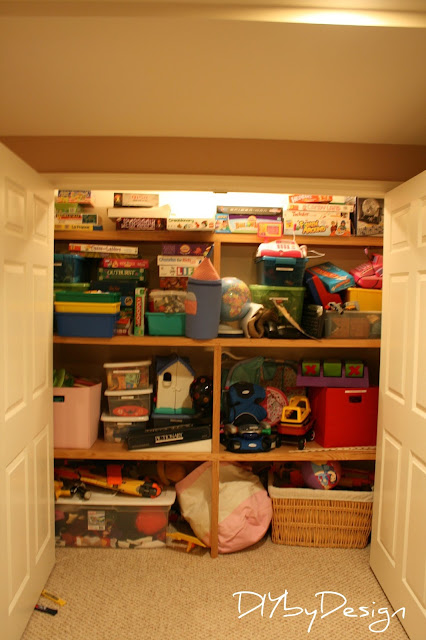 They will be starting the remediation on Thursday.  The process includes cutting away all of the sheetrock within a two foot radius of any found mold, pulling back all of the baseboard molding and checking for mold elsewhere.  It also includes removing all of the carpet, creating a negative pressure situation in the basement and cleaning all of the air.  We have to empty out the basement almost completely.  This toy closet has a very musty smell too so I fear they will find mold in there as well. 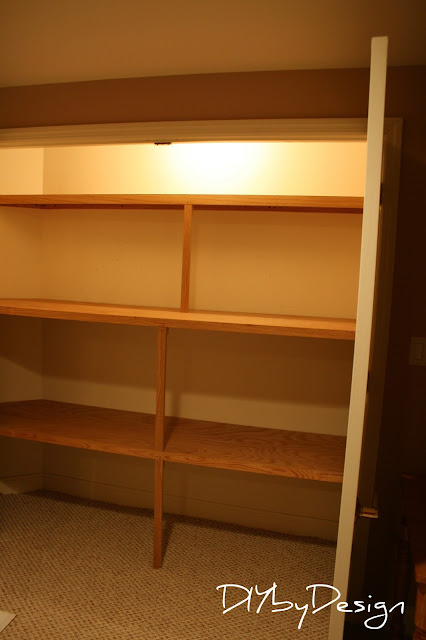 We emptied out this closet and are using this as an opportunity to go through everything and start to get rid of those toys the kids have outgrown.  Not such an easy process, especially with my kids, who seem to have an attachment to each item I propose throwing out.  Some they have no choice about, especially the bag of stuffed animals that we just can't take a chance and put back in the room after it is remediated. 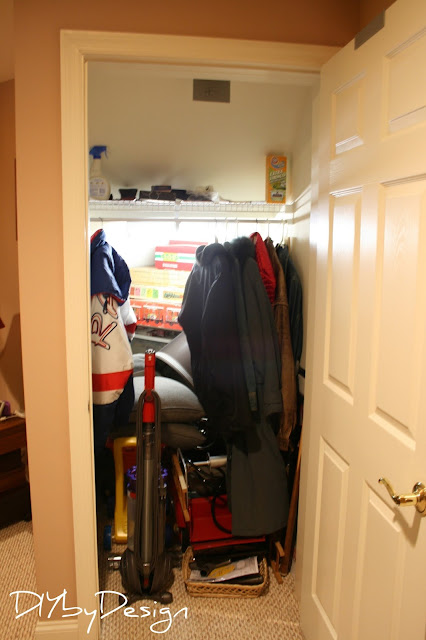 The closet under the stairs was next to be emptied. 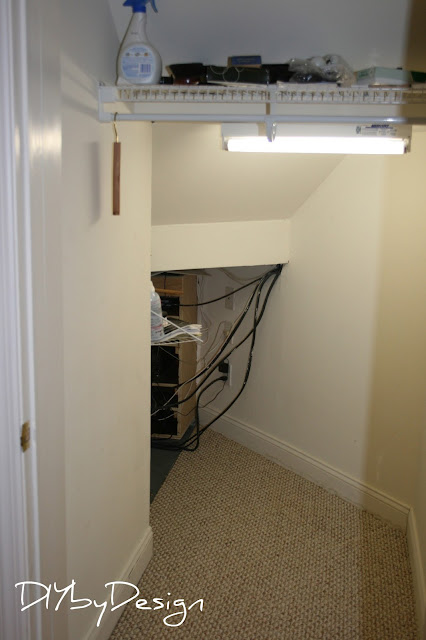 This closet is way bigger than we remembered.  It's going to be much better organized after the remediation too.  Those wires you see go to the equipment in the home theater on the other side of the closet. 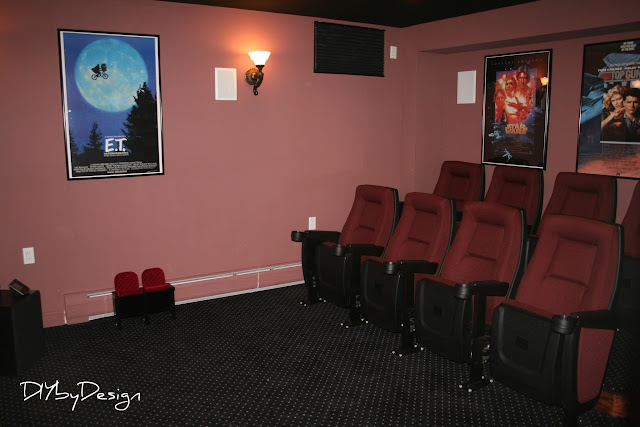 This is what our theater usually looks like.  The theater has no air quality issues, so it will be exempt from the remediation and will act as a storage room for everything we move during the process. 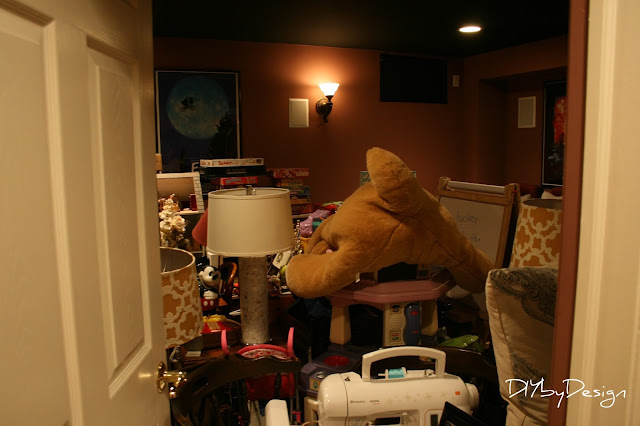 As it turned out, the poor air quality in the basement had nothing to do with why our cat got so sick.  The basement is going to get almost a complete makeover due to this situation.  New carpet has been ordered and the painters are ready to go as soon as the remediation process is complete (about five days).  Our painters will also be responsible for repairing all of the sheetrock damaged during the remediation process.  All in all it will probably take about two to three weeks to complete everything and get the basement back to normal.  The hardest part about this entire thing is that Sara (the cat) is going to be displaced by the whole situation.  Although she has the run of the house during the day, her litter boxes are in the basement and she sleeps and eats down there as well.  We are concerned with how she is going to react to the whole thing.  Let's hope that she is not going to be too freaked out.  I'll keep you all updated during the process.  I can't wait until we get to the pretty part.

Email ThisBlogThis!Share to TwitterShare to FacebookShare to Pinterest
Labels: basement

It's a good thing you had this looked into Judy, I'm sure it would have gotten worse seeing mold spreads! Thankfully no one has gotten sick!
Don't even get me started on homeowners ins.!! When we had water come in downstairs in my moms apt. two years ago they wouldn't cover it because it came form the ground, but if it came in through the roof they would have go figure!

Oh my, so glad you found it before it was even worse. This does sound like a major project. The new pretty will be fun to do, so that's the good part. Hugs, Marty

Oh wow, it's a good thing you had it looked into, but I'm sure you are not thrilled about having to have all this work done. Especially with all the decorating you just put into this area recently. I'm glad you caught it before anyone did wind up getting sick.

So sorry you have to go through this. A surprise discovery of mold in our basement was what led to our entire renovation of it. We had it professionally remediated as well and they ended up basically unfinishing our finished basement :-( Alas, it is much nicer and safer now but still wasn't how we were planning on spending that year! Good luck!!

So sorry for your cat & the mold problem. I know too well all about remediation. My family & I had to move from a rental years back because levels were really high & we were forced to throw out alot of things that I wouldnt risk keeping because my daughter was sick. Mold is not anything to mess with Good for you for tackeling it correctly with professionals.

Oh Judy, I'm so sorry! What a mess. Thank goodness you found this issue though and that Sara is all better! And you are looking on the bright side of life with the painters coming, when they are done you can have some fun down there! Hang in there friend, if you lived near me I'd bring you some chocolate for sure!

Oh gosh - I'm glad you thought to call when you did! What a project though! I'm glad your kitty is doing better too.

I don't even know what to say. Maybe just....Wow! Hope that all goes smoothly for you. You'll certainly enjoy your "new" finished basement. Cherry Kay

We have gone through this after a plumbing disaster several years ago. My advice: check, double-check, and triple-check behind every thing that is done. We were lucky - our insurance had a one-time only mold policy added to it when we bought our house. Our agent received a huge thank you.

What a headache! I'm sorry you have to go through all this, but at least you'll be mold free & have peace of mind.

Oh man Judy I am so sorry to hear of this. My friend just had the same issue in her Florida home. She had to leave for two weeks while they worked. I am so glad your kitty is OK, and your heart told you NOT to put her down.

Oh no! I'm so sorry that you are having to deal with that but so glad you guys caught the problem before it got any worse. I know you will turn it into a wonderful opportunity to make that space as fabulous or even more fabulous than it already was! Hang in there friend! :-)
Vanessa

So glad you caught the problem and it can be fixed. I know it is a hassel though and the basement does look so pretty but at least it can be fixed and it will be even better.

Egads, thankfully you will all breath easier when it's done.

Wow! What a mess! I'm glad y'all were able to figure out what the problem was.


I'm glad your cat recovered. And despite the mess that happened in your basement, as you've said, you can use the chance to sort out your stuff and remove the unnecessary items. Hopefully the new treatment will minimize the chance of mold growth again.

Wait, so why did Sara get sick then? Nevertheless, at least there was a good thing that came out of it. You wouldn’t have had the mold specialist check your air quality if she hadn’t gotten sick, and it might have resulted with you or other people getting sick due to the mold infested air in the house. Hopefully everything’s better now and mold free. – Eric