My kids are thirteen and ten now.  When my son was born we bought a glider chair with an ottoman.  There weren't nearly the options thirteen years ago that there are today for seating in a nursery.  So this is the glider and ottoman we bought. 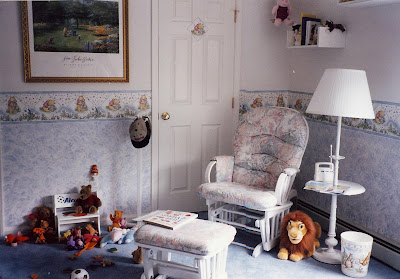 I think almost everyone who has kids around my kids age had a glider like this one.  When I found out I was pregnant with a girl, I knew that this glider just wasn't going to cut it for a girl's room.   It was cute and all, but not nearly girly enough for me.  As we prepared my son's big boy room, we moved the glider into the nursery.  I used it the way it was for a while.  In the meantime,  I started to look around to replace it with something more attractive.

I saw this picture in a Calico Corner's catalog (back then they use to send catalogs - I have all of them saved in magazine holders).

I fell in love with the glider chair and ottoman (as an aside, I also fell in love with the look of the white metal daybed...I think that was one of the main reasons I bought my daughter a very similar daybed).  As it was shown in the Calico Corners catalog it would cost $1395 for the swivel rocker and $750 for the ottoman!!  That was over $2000...just too much for me to spend for a chair and ottoman...and that was almost ten years ago!  So, as much as I loved it, it wasn't going to happen.  But I knew I wanted to achieve that look.  My other issue was that space was limited in my daughter's room.  I couldn't have a huge chair, or even a medium size chair, taking over the room.  The glider and ottoman we had already did fit perfectly and were very comfortable.  Maybe I could do something with my glider to make it look like the one in the catalog.  I decided to call in an upholsterer to see if he could upholster my existing glider and ottoman to make it look like the one in the Calico Corners catalog.

When I met with the upholsterer,  I was so happy to hear that he didn't think this was such a crazy idea.  He had never actually done it before, but he didn't see why not.  This is what he achieved: 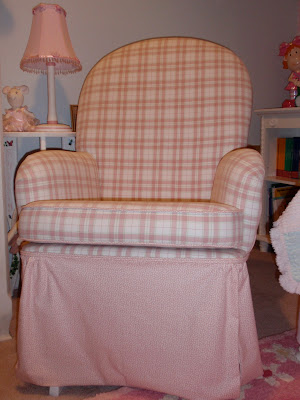 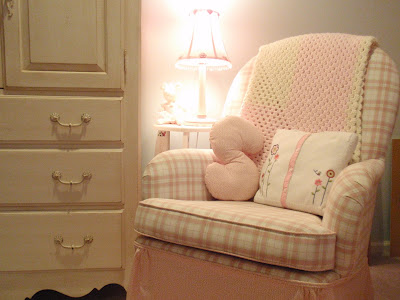 I got everything I wanted -  the two different fabrics, the contrasting welt and the skirt.  Pretty amazing. 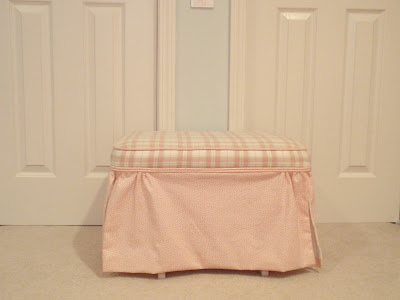 So if you have one of these at home


You now know that it can look like this...and it will cost you far less than replacing it. 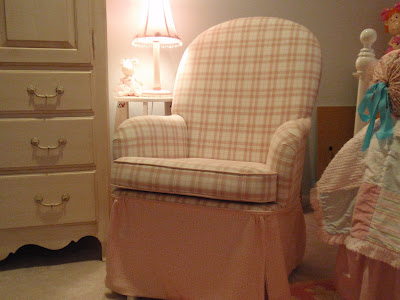 Almost ten years later it's still in great shape and still nice and petite and still very comfortable.  I picked Laura Ashley classic fabrics that will never go out of style.   I still love this chair today.  My daughter loves to curl up in that chair and read.

Let me know what you think.  Hope I inspire someone out there to do the same to their basic glider and ottoman.

Makes me wish I still had my glider rocker, this is FAB!

How amazing is that??? A lot of folks have those old gliders, I think my brother has one too, and they are so comfy to sit and rock, although it's more of a sway. He did an amazing job and so did you! Love it, tami from the high street cottage, ps, I have begun following you :)

Wow that is beautiful! I love your color and fabric choices. I have never thought to try and find someone to reupholsterer something but I should consider it as it would be cheaper than buying a new one!

Thanks for linking up to Making Your Home Sing Monday!

Christa @ Stories of a House said...

wow, it is perfection. I try not to go into Calico because they are so pricey! Good job for recreating the look for a lot less! Your daughter's room is precious.

I use to think that Calico Corners was pricey but I just stopped in to find that they have better prices on their sales than just about all of the other fabric stores out there. Loved your project. It turned out beautiful.

Oh my goodness Judy! I have never seen anyone redo a glider rocker like that! Just knowing that is an option is wonderful and will inspire so many others to not just feel like they have to get rid of it or live with it like it is. Thanks so much for sharing this with us!
Vanessa

I love Calico Corners. Most of the fabric I get seems to come from there. The fabric they sell is beautiful and is priced pretty fairly. Their furniture is custom and very well made so that is what you are paying for. If you can ever buy a floor model it is worth it. Years ago JoAnn's use to sell custom furniture and were extremely reasonable. They stopped selling custom probably because they were so reasonable they couldn't make any money.

What an adorable idea ! I always thought those gliders where pretty ugly - my kids are much older than yours, but when they were babies I had an upholstered rocker/recliner thing in the family room. That's where they were rocked and later took naps and as men, watch tv in !

Thanks for sharing that great idea ! I'm your newest follower !

What a great idea and so clever- it looks practically identical !!!How pretty it looks .Thanks for sharing , Judy

I love it! What a great idea!!

What a great idea... looks beautiful!

Love it, and I am a BIG Calico COrners fan, but way too pricy for me... I will have to try that, He did an amzing job.. A new follower, ill be back to see what else your sharing.

Wow! It doesn't even remotely look like the chair it was!
Brenda

Hi Judy~ What a fantastic idea- it looks completely different and is just beautiful! It looks so much like the inspiration chair and is perfect in your daughters room! Thank you for sharing this at Feathered Nest Friday! :)

You now have a beauty...what a change. Trish

my wheels are turning for an old cherrywood rocker/recliner. GREAT post, thanks so much! Love your taste & style.

This is beautiful! I like the fabric of the glider. So nice and so cool to the eyes!

This seems to be a great site which offers an advanced Nursery Bedding, Crib Bedding, Baby Strollers, Nursery Glider Recliner, Little Castle, Little Castle Glider etc.and i would surely like to try their service...i had been relying on http://www.royalbambino.com earlier and they too offered good stuff.

I was hoping you would talk about that chair! I would NEVER have guessed it was a glider. It looks great!!!