Last year we decided it was time to reclaim a portion of our finished basement for more of a family space.  We had finished it nine years ago when my kids were one and four.  For the first few years it was a giant play area which was perfect for us at that time.  But as the kids have gotten a little older, we needed more of an area where they could play the Wii and we could hang out as a family. 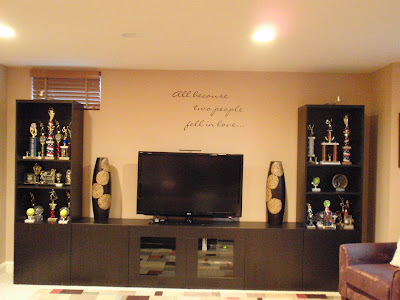 Prior to this, we had a smaller television on a small stand from Target.    I wanted a wall unit that would cover the entire wall, hold a larger television, and have space for my kids' ever expanding trophy collection.  However, wall units are expensive and so many of them were just too formal for this downstairs space.   In addition, it was really difficult to find one that had adjustable shelves for their trophies.   Our solution...IKEA.  What a great store.  We put together this combination and got everything we wanted plus tons of storage.  It was a great deal.  As a side note -  the saying above the television was there prior to the wall unit.  I love it and didn't want to  remove it.  The phrase wasn't moveable, which is why it's not completely centered. 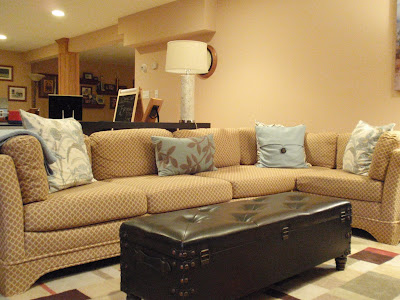 The sectional sofa is over thirty years old.  This was in my parents home when I was growing up.  They gave it to us when we moved into our townhouse.  We used it in the basement there.  When we moved into this home,  it started in our great room, but as we redecorated, it was relocated to the basement.  My mom recently pulled the bill and discovered that it was $5000 then...I guess it really pays to buy quality.  It still looks amazing.  I'm thankful they picked a neutral fabric that works with everything.
The coffee table/bench is from Home Goods.  It opens up to reveal storage for all of the Wii games and components. 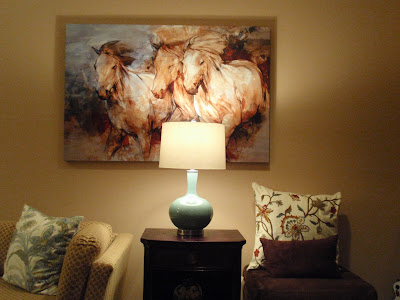 This artwork set the tone for the color scheme.  I bought it at Bombay when they were going out of business.  I got it for a steal.  I later saw it at Ballard Designs for triple the price.  The lamp is from, where else, but Home Goods.  Most of the pillows are from Pottery Barn. 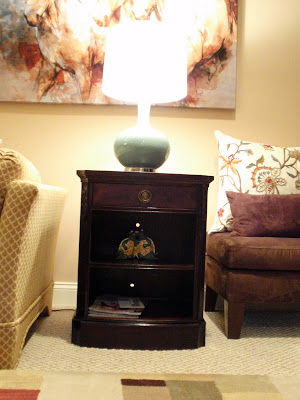 The side table is one of the trash to treasure saves from my grandmother-in-laws home after she passed away at almost 105.  It was in terrible shape, chips all over it and ring stains on top.  I sanded it down and re-stained it.  It works perfectly downstairs. 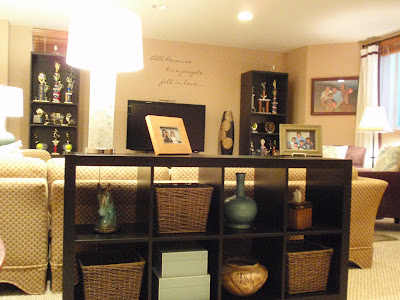 This piece is also from Ikea.  It is technically a shelving unit, but it makes a perfect console table.  The lamp and accessories (except for the carved brown vase which is from a trip to Arizona) are from Home Goods. 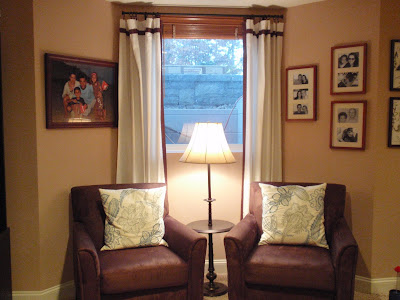 Here is a little seating area by the scapewell window.  Chairs are from Target, pillows from Pottery Barn.  To see how I embellished the drapes and refinished the lamp, click here.

It is nice to have an area of the playroom where we can all hang out now.  Let me know what you think.

Judy the room is gorgeous~! I just seen your post on my chairs I re-did. Thanks for coming by and the compliment. I am now your newest blogette follower.

I would love for you to follow me as well. That would be sweet! I look forward to poking around your blog :) Happy Holidays to you.

What a wonderful space Judy! That sectional is fabulous and definitely quality for it to have made it that long! It just goes to show that it pays to buy something classic so it can stand the test of time. You guys have done a great job making it feel warm and cozy and that must be where everyone wants to hang out...I know I would!
Happpy Thanksgiving!
Vanessa

Judy, your space is spectacular! I love your pillows, the neutral backdrop, and the warm & cozy vibe. I hope you and your family enjoy spending time in there!
Have a wonderful Thanksgiving! -Lisa