My husband came home on Saturday morning from a business trip and brought back some assorted nuts and candy the hotel had given him.  The nuts and candy were in a little tray.  The nuts and candy disappeared quickly this weekend (it was yummy).   After the treats were gone, I put the tray aside knowing I wanted to do something with it, but not really knowing what I would do with it.  Yesterday I was reading some of my favorite blogs and read Isabella and Max Rooms.  Her post was all about making trays as gifts - what a timely post for me.  One of the trays in particular, looked just like the tray from the nuts and candy that I had just put aside.  I was inspired to try her project on my tray. 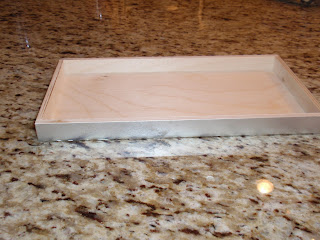 It's kind of hard to see in the picture, but the sides of my tray were covered with a silver paper.  I needed to remove that first.  It didn't come off easily.  But eventually, using a combination of water and sandpaper, I got it all off. 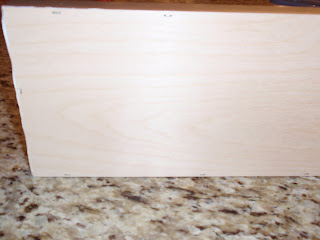 The bottom of the tray had little staples in it.  I would have to address that as well. 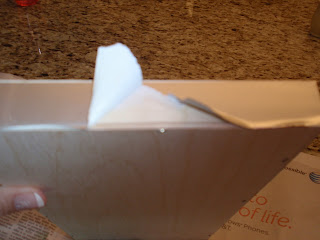 You can see here how only tiny pieces of the silver paper came off each time I pulled. 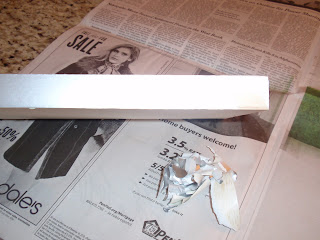 This shouldn't have been the most difficult part of the process, but it was.  Ruined a completely good manicure. 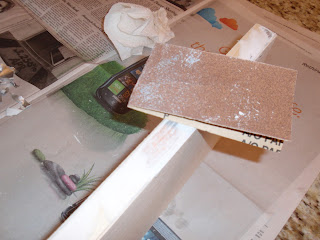 Once I got all of that silver paper off, it was time to sand and paint. 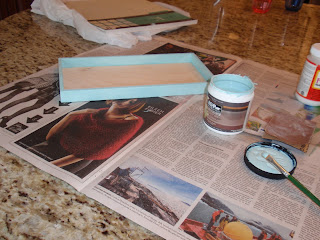 I had some small samples of paint from when I was trying different colors in my daughter's room.  I used this beautiful aqua blue (it was between this paint and the one I ultimately chose for my daughter's room - this one was a little too bright for her room but perfect for this tray).  I painted the outside, top and inside of the side walls.  I painted one coat, lightly sanded, and then painted a second coat. 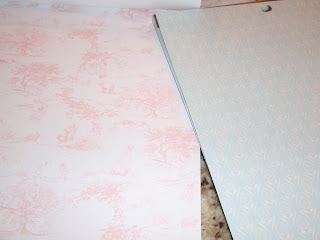 While the paint dried I chose a paper.  I have alot of scrapbook paper and had a hard time choosing.  I loved the pink toile...but also loved the blue print. 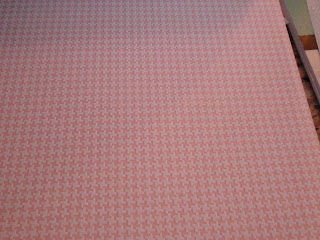 This houndstooth would look beautiful as well...and it's textured too. 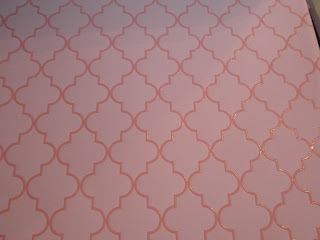 This is a pretty print also...maybe a little too modern for her room. 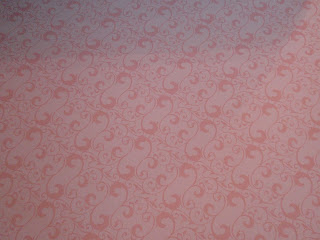 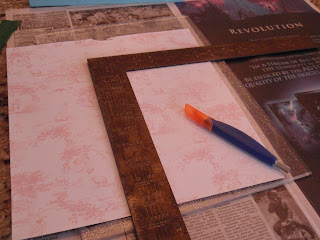 Ultimately I chose the pink toile.  I measured the inside of the tray and using a square and a knife cut out the paper. 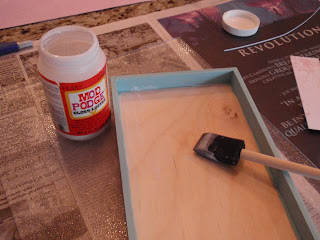 Isabella and Max Rooms used glue.  I didn't have the same glue as Janell used, so I figured mod podge would work as well.  I brushed glue both on the surface of the tray and on the back of the paper. 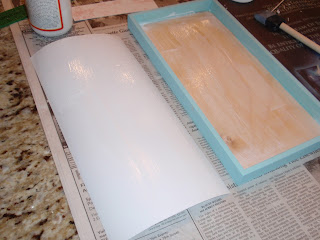 Ok, confession time - I only brushed the mod podge on the tray the first time (yes, I ended up needing a second time).  When I went to put the paper on the tray I pressed all over, but there was a bubble.  I tried to get it out but I didn't put enough mod podge on the wood I guess.  So then I tried to add mod podge on top, thinking some how it would seep through.  I ended up making a big old mess.  I had to remove the paper...much of which had stuck.  Then I had to sand the inside and restart.  Luckily I had another sheet of the toile paper.  That is when I decided to brush to mod podge both on the tray and on the back of the paper.  Maybe I should have used glue. 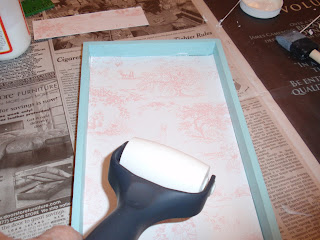 This time I used my handy rolling pin from Pampered Chef. 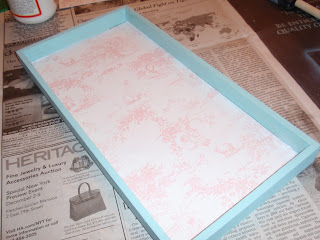 Yay!!  No bubbles.  For now I decided not to add a sealer.  I will probably add a sealer that way she can place a glass of water on it.  Today, I just couldn't take a chance at ruining another piece of paper. 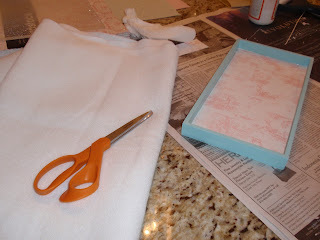 Now to address those staples at the bottom of the tray. I used some leftover felt and traced around the tray and cut it to size. 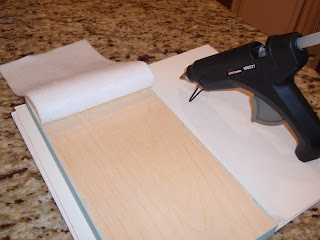 Using my trusty hot glue gun, I glued the felt to the bottom of the tray. 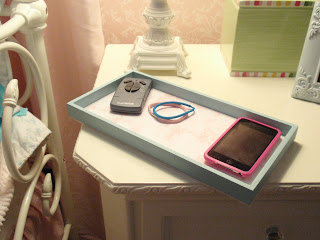 The perfect little bedside tray.  I created this using things I already had in the house. Again, thank you so much ﻿to Janell from Isabella and Max Rooms for her awesome idea.  Her blog is one of my favorites.  If you haven't already, you should go and check out her blog.   You wlll be truly inspired if you do.
-Judy
Posted by DIYbyDesign at 7:05:00 AM

Oh wow -- that IS the perfect bedside tray. The felt was ingenious -- this project was well worth the cost of your manicure. Thank you for sharing your "bragable" on the Boardwalk Bragfest. It has me inspired!

Great way to transform your tray!

This turned out great, glad our project inspired yours and thanks for the shout out!!! Janell

Love it! This turned out so cute.

So pretty! I love the paint color on the outer edges and the sweet toile inside. Thanks for sharing!

I adore trays and yours is just darling. btw, I have the same issues with Modpodge. Try as I might, I always get bubbles. But a small price to pay for some the beautiful papers they have now.

Would love you to stop by this weekend and link up to Passion for Paint.